Protest March against Kidnap of Activist in Oaxaca

On Friday several hundred marched through the streets of Oaxaca to protest the kidnap last Sunday of Nancy Mota Figueroa, member of the Coordination of Women of Oaxaca (COMO, which is part of APPO). Nancy was kidnapped by suspected cops and released an hour later after being tortured. 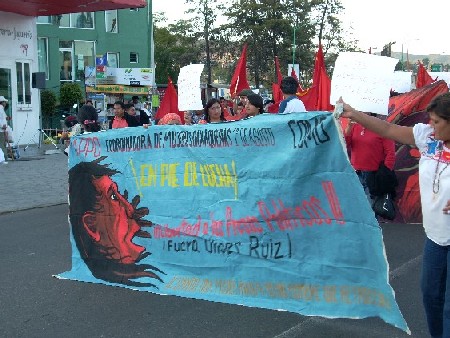 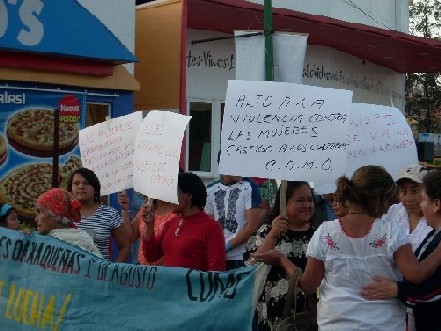 Here is Nancy's testimony of her ordeal:

On Sunday December 2, 2007, around 11:45 or 12:00, I found myself walking along the streets of Jazmines in Colonia Reforma, where the store “Pitico” is located.

At that point, a braking car was heard and when I turned my face. I felt two people lift me up and fling me into a truck. Immediately after, they blindfolded my eyes with a rag that was covered with a liquid. They began to ask me questions referring to what I knew “of the leaders of the APPO. Tell me what you know of Flavio Sosa, Zenen, Erangelio, Patricia Jimeinez y David Venegas.” I did not answer. They continued insisting and I did not answer. Later they grabbed me by the hair and squeezed my hands behind my back and they forced me to put my head between my knees. They pulled back my hair to push two pistols against my head. They asked me if I thought I was a bad-ass or what and I didn’t answer. Immediately afterwards they began to say that I talk to my family, that everything was going to go to shit. In this moment I told them that everything they wanted was with me that they not touch my family. They responded that for this there was only one big-mouth. I heard one of them say, “Shoot her already so that we can dump her.” I heard them cock the gun.

I told them that if they shoot that they do it now because all of this is going to shit. They told me another time “You think you are a bad-ass or what?” When this was happening one guy began to touch me on the back. I got up and kicked him. They forced my arms back and punched me in the stomach. I don’t know how long they had me, the truck was roaming about. When they decided that this was all, they told me that this is the first of many times they will wait for me because I know a lot of information, especially in respect to the APPO. They told me that they would wait for the moment to find me alone. At that point, they braked and said, “Stop your participation if you don’t want this to happen to your brother or more than that. How you like to defend women, for the next time you are going to defend her with proof of rape.” They grabbed me and shoved me out of the car and threw my cell phone at me. They left me behind the Hotel Fortin Plaza, where there is a vacant lot. When they kicked me out of the truck, I called a friend to tell her, but with the fear that they will harass my family. I thought what will happen if I don’t make a denunciation at the moment? Now I do it convinced that we cannot keep silent. Similar things have happened to many friends, and they did not want to denounce it to protect their families but enough already with the harassment. The repression must stop against us.

founder and member of the commission of press and propaganda for the August 1 Coordinator of Oaxacan Women. Councilor with the APPO student sector.
For more visit: