3 protestors who arrived to set up a peaceful protest against Tesco’s investments into biofuels were manhandled by Police in central London on December 8th who forced them into a metal pen. Despite, this a peaceful protest was held for an hour including a stop by 300 cyclists and 1 minutes silence for those who are suffering or who have died as the result of massive expansion of large scale biofuel plantations across the South. 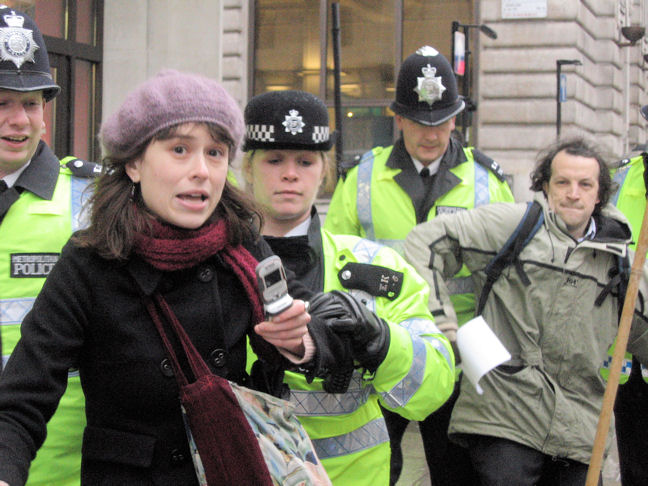 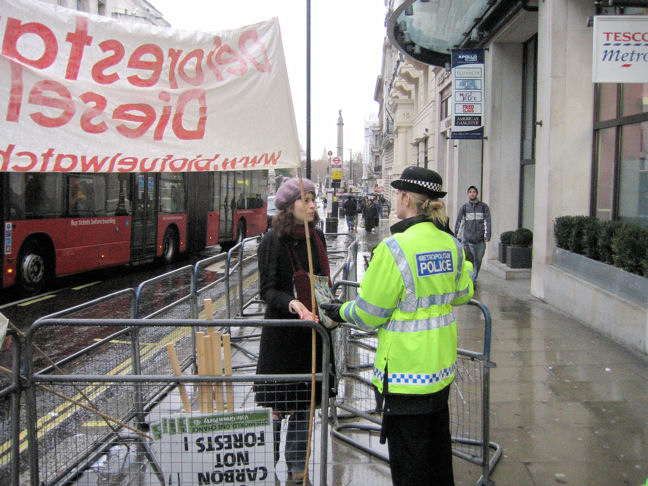 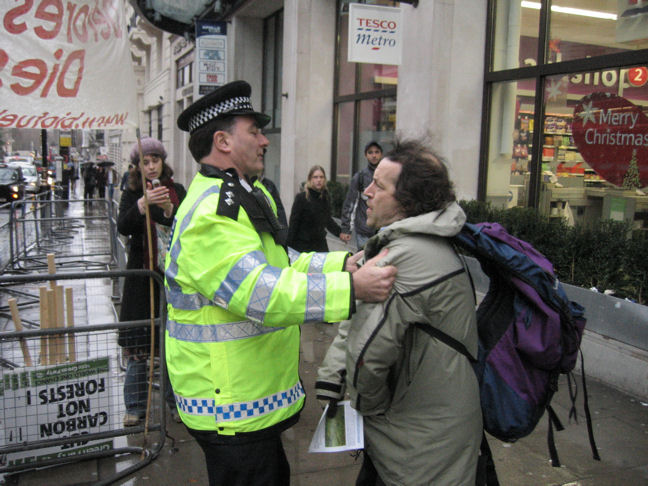 Protestor is grabbed and forced into pen 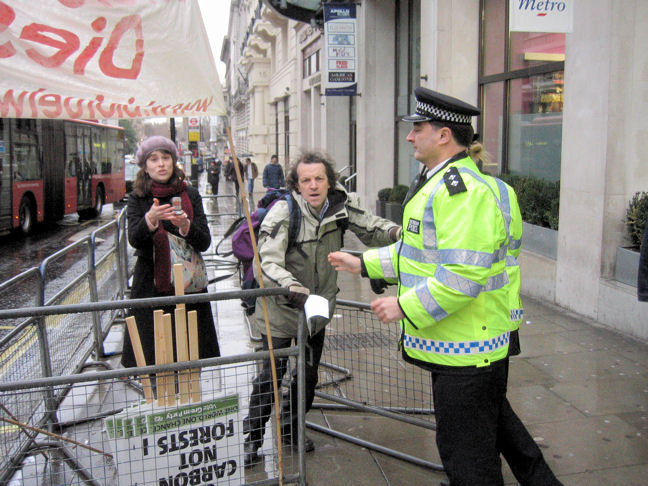 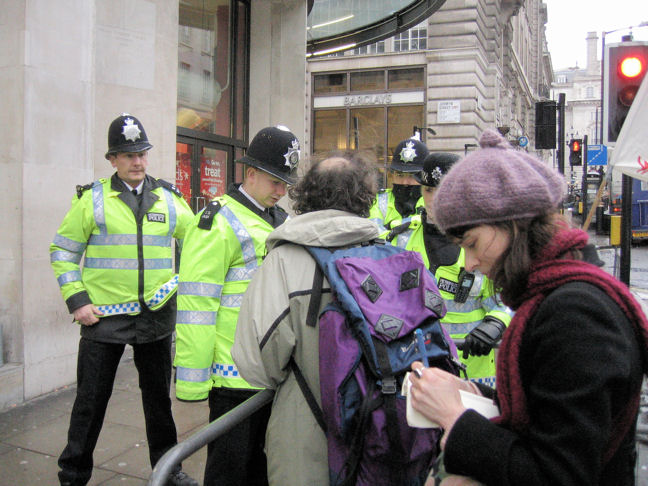 How many police needed to keep 2 peaceful protestors in a pen? 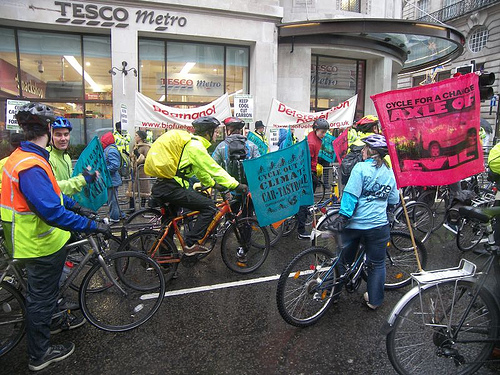 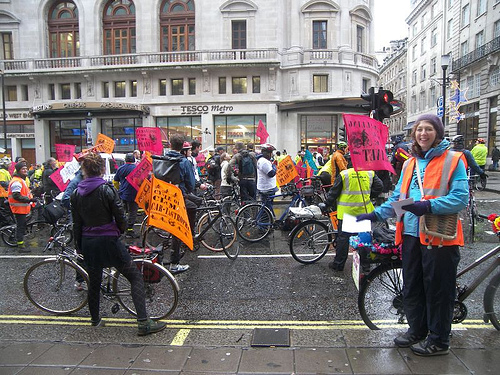 Photo by Mike Greenville: Cyclists listen to speech on Tesco's and biofuels 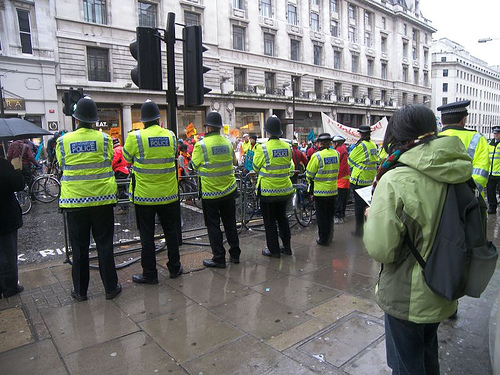 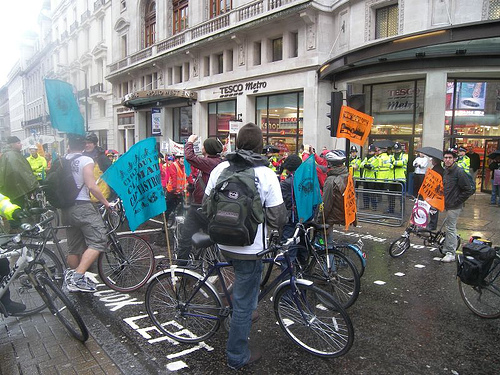 The protest had been well advertised as a peaceful protest, part of the cycle ride before the London Global Climate Action D8 march, that would start at 1030am and last until 1130am. On arriving at 1000 to set up, one protestor found that there were 5 police vans waiting on the corner of Regent Street and Jermyn Street.

As three protestors set up, police insisted that they stand within a metal ‘pen’ that had been placed on the pavement. The protestors refused as the pavement was very wide (see photos), there was only going to be a few of them, and they did not intend to obstruct pedestrians. The police then manhandled the protestors into the ‘pen’ (see photos).

The 3 protestors, Dr Andrew Boswell of biofuelwatch and a Green party councillor in Norfolk, Dr Derek Wall, Principle speaker of the Green Party and Claire Sims were joined by about 4 other protestors who leafleted shoppers going into Tescos and passers- by.

Around 300 cyclists arrived at 1115am, and Andrew Boswell and Derek Wall spoke to them (Andrew Boswell’s speech is appended below). The protest then concluded peacefully as it had started.

Tesco describe their biofuels investments on their webpage at:

‘We are already the UK market leader in biofuels and during 2007 we aim to double the proportion we sell. This means that customers will be able to buy a 5% bioethanol mix at over 300 petrol stations in the UK. This helps our customers reduce their emissions, as a car driven with our bioethanol mix petrol is responsible for 4.5% less CO2. We were the UK's first major retailer to incorporate biofuel into our standard petrol and diesel, with no price premium.

We also use a 50:50 biodiesel mix in our own vehicles - the highest percentage blend used by any major distribution fleet. We have a 25% stake in biofuel supplier Greenergy, which has opened the UK's largest single-line biodiesel plant, on the Humber estuary, with an annual production capacity of 100,000 tonnes. Greenergy buys rapeseed for conversion to biodiesel from around 1,500 farmers contracted through Grainfarmers, a large agricultural co-operative in the UK.’

An article in Auto industry magazine

http://www.autoindustry.co.uk/news/02-04-07_6
describes how ‘Greenergy's biodiesel plant in north-east England began commercial production on Friday 30 March(2007), and should ramp up to full capacity of 100,000 tonnes/year in a couple of weeks, according to the company. The plant refines biodiesel from rapeseed oil, palm oil and soya oil. Chief Executive Robert Owens told Reuters that the second phase, which should take capacity to 200,000 tonnes is on schedule to be completed in November.’

Thanks for joining us here for this protest against Tesco and their investment in the large scale biodiesel industry. Thank you coming in a zero-carbon way by pedal power.

Palm oil is in a lot of food products. In fact it is 1 in 10 of Tescos products.

But we are here today to protest against Tesco’s investment in Greenergy Biofuels Ltd and their role as a major distributor of biofuels. Tesco have been market-leaders of biofuels amongst supermarkets. Greenergy uses palm oil, soya and rapeseed oil in their biodiesel and also sells Brazilian sugar ethanol, and they thus contribute to further global warming, deforestation and threaten the livelihoods of many communities in the global South.

Let’s just touch on the ecological, social and human issues with biofuels. As the biofuel industry expands, we see biofuels cause poverty to indigenous peoples. People who have lived for generations on land and in the forest have their land grabbed. Social and land conflicts result. There’s abuses in human rights and labour rights.

When large monocultures are grown, often the people remain in villages within the large plantations of Soya or Palm. When pesticides are used, the pesticide plane does not select where to spray – people are often poisoned, become ill and sometimes die from pesticide poisoning.

Food security and sovereignty is another big issue. Globally we are seeing massive amounts of food crops for example Corn, Wheat, Soya, being sold for fuel. Or land where communities grew food becomes taken over for growing full crops. A more immediate problem is that biofuels, along with other causes (climate change droughts and increasing affluence in China and India – EXPAND), have forced up world food commodity prices. Wheat has gone up 75% in just the last few months. This impacts poor countries who cannot grow all their food and have to buy on the international markets – they can buy less food. These countries often have people close to starvation who are forced into starvation by these rising prices.

The UN has also highlighted that land displacement could cause up to 60 million biofuel refugees – 5 million in Kalimantan in Indonesia alone. Once displaced from their traditional lands, people may try to eak out a less than subsistence existence on what remains of their homelands, often having lost their traditional food sources, or they may migrate in the mega-cities of the global South and become the urban poor.

We will have 1 minutes silence at the end of this speech for those people suffering now or who have died as a result of the rich world’s mad rush to biofuels.

Massive biofuel production will also contribute to systemic ecological problems such as water depletion, soil erosion and chemical poisoning of the land by excessive fertilizers and pesticides.

But let’s return to Palm Oil.

Deforestation and peatland destruction is a massive contributor to global greenhouse gas emissions – about 20% of emissions each year. In really badyears like 1997 when there was massive peatland burning in South East Asia, even more – possibly 40% in 1997. Palm Oil plantations are planned on a massive scale across South East Asia and into pristine rainforest and peatlands.

So right now, Indonesia and Malaysia are set to destroy millions of hectares of rainforest and peatlands for Oil palm plantations to feed European cars.
And Tescos and Greenergy are helping them.

The New Scientist reported last month that palm oil biodiesel, produced this way, can produce up to 36 times – yes, 36 times, that is 3600% - more carbon emissions than ordinary fossil diesel.

We would do all better to start driving Hummers than use this fuel!

In South America, our demand for biofuels is pushing up the price of soya and fuelling the destruction of the Amazon, on which all our survival depends.
And Tescos and Greenergy want to sell us Soya biodiesel too.

We have to also address Governments.
Europe's biofuel policies are driving deforestation and the EU wants a 10 fold increase in biofuels by 2020. If we do not stop them, then everything else we do as a movement will become irrelevant, because we will have no hope of stopping runaway climate change.

Such massive biofuel expansion is set to further damage the climate, further risk food supplies for many of the world’s most vulnerable, cause more strife and violence in land disputes, and create even more biofuel refugees displaced from their traditional lands.

We cannot grow all the necessary crops in the North.
Even biofuels grown on European soil with heavy nitrogen fertilizer regimes produce nitrous oxide – a greenhouse gas 300 times more damaging than CO2 that damages the climate.
And Tescos and Greenergy promote oil seed rape biodiesel too.
A recent study showed that the fertilizer used in growing it can produce up to 70% more GHG emissions that fossil diesel.

So Tesco and Greenergy are making us climate loosers, whatever biodiesel they supply – Palm, Soya, or Oilseed rape. We have to stop them, the EU and the our Government.

The UK Government is blindly following the EU and has mandated 2.5% biofuels at the pump from next April 15th. This will go down in climate justice history as April Biofools day. Unlike Apartheid South Africa, no one will be able to boycott their part in increasing global warming.

We need deep real cuts in our transport emissions … by travelling less, by using cars less, by using public transport more, by using cycling and walking more, by making the car industry deliver strict fuel efficiency standards, by transport policy that builds mass transit systems, by social and planning policy that helps people live closer to their work and travel less, by producing most of our food locally and by reducing imports and the volume of trade.

We must resist this ‘mad rush to biofuels’. Today, we will be handing in a letter to Gordon Brown at 10, Downing Street with demands for climate justice.

There is only one way to stop biofuels from pushing us into runaway climate change and that is such a moratorium. Over 200 NGOs from North and South have signed such a call to the EU, and this week a large number of NGOs from Africa published their own African Call for an Agrofuel Moratorium.

This won’t happen just because we ask the governments for it. We are up against the largest corporate interest alliance ever : big oil, big agribusiness, chemical, biotech, car manufacturers and venture capitalists, with the support of much of the global political elite, including the top neocon military and political establishment of the US.

We won’t stop the destruction without a large movement against agrofuels. We don’t want biofuels, AND we don’t want the climate, social and human injustice that they will cause. We must succeed for all our other efforts to combat climate change to be worthwhile.

This is why biofuelwatch is calling for a national week of local action against agrofuels from 26th January and would like all of you to contribute however you can in your area. Not just in January, but for throughout coming years to help us build a grassroots campaign throughout the UK.

Please help us with publicity and events in your local area. Get one of our leaflets being handed out today and check out our website www.biofuelwatch.org.uk.

We must demand that Tesco, and companies like them, disinvest from biofuels. They must drop the plans to sell biofuels.

We must resist and force the Government to listen.

We can defeat Brown’s biofueling bungling driven by his US and EU masters. We can defeat the biofuel madness. Let’s start resisting it today.

Let’s now have a minutes silence for those who are suffering for rapid, massive biofuel production across the Global South, and remember those who have died in protecting their land, or from pesticides, or from starvation, or from poverty.

Another example of the police plan to expand SOCPA

If you haven't got police permission, your demonstration is illegal in their eyes, and soon in law: