Activists from around the country are travelling for a national march and demonstration in Ledbury this Saturday 15th December commencing at 12:00 from Ledbury train station marching through the town centre and through residential areas. 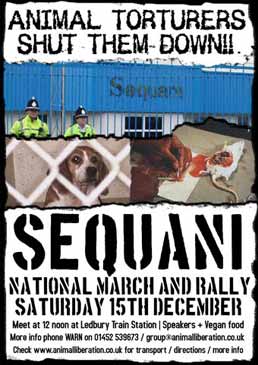 This is in response to the cruel and unnecessary experiments being performed on sentient animals in the Sequani labs which includes research into nappy rash, deodorants, anti dandruff shampoo, period pain and sunburn i.e. hardly “life saving medical research”. Sequani will test anything for anyone, they are a contract testing laboratory, and do not care about the frivolity of the end product or their victims who die in agony from their violent attacks. The only thing they care about is if they get paid. Experiments include putting rats into deep water and is described as follows by a Sequani minion;

“The current favourite is called the Morris maze which is a big tank of water with a hidden platform just beneath the surface of the water, and you put markers all around the room. So, there is actually nothing in the maze and the animal is in the water and has to find the hidden platform”.

Not content with poisoning animals and then deliberately terrifying them the same author poisons pregnant animals and refers to “a nice abnormal little foetus”.
Such a perverse, disgusting mindset is a disgrace to every decent human being.

Furthermore a rat or a beagle is very different physiologically, emotionally and mentally from the human species. Results from such tests can not be safely extrapolated to humans who are then at risk from harmful new products including medication, paints, pesticides, fertilisers, industrial chemicals, food additives, colourings, detergents ad infinitum. The only true measure of whether or not a product is “safe” is when the general human population has used that product for a long period of time, long enough for birth defects to materialise.

Even if you do not agree with our views in this matter you may conclude that in a democracy peaceful protest on any issue let alone one as controversial as animal testing should be permitted. Unfortunately this is not the case and there have been many arrests at Sequani for simply being present in the vicinity of the laboratory. West Mercia police have behaved in the past as though they were private security guards for the laboratory putting their every whim above the policing needs of the community on a regular basis. Whilst activists have been apologised to and financially compensated by the police for their worst excesses, and whilst we hope that lessons have been learnt by the police this demonstration is also taking place to show solidarity with peaceful activists who are still facing police oppression.

We encourage local people who oppose these horrific experiments on our fellow creatures to march with us to let Sequani know that society has only one thing to learn from animal experimentation that is: what is the lowest we are willing to stoop to make money.

There is transport going from London, Leeds, Bristol, Gloucestershire, Worcestershire and Herefordshire. If anyone needs transport or can offer a lift / seat please ring us on 01452 539673