Since early Friday morning about thirty people, amongst them a dozen cyclists, blockaded the main road to the NATO summit in Craigiehill, in between Edinburgh and South Queensferry. There were no known arrests, but a heavy police presence including mounted police and dogs. 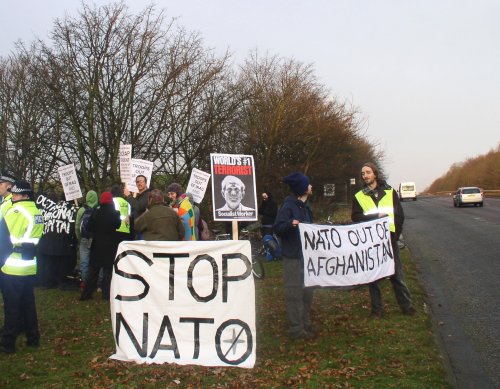 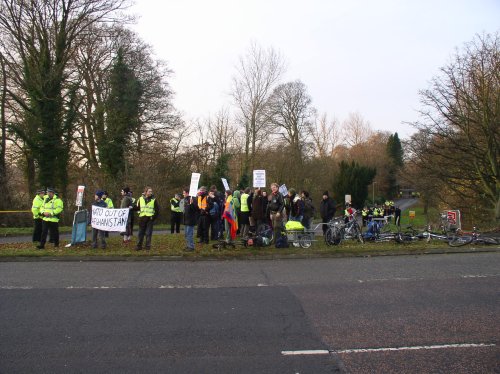 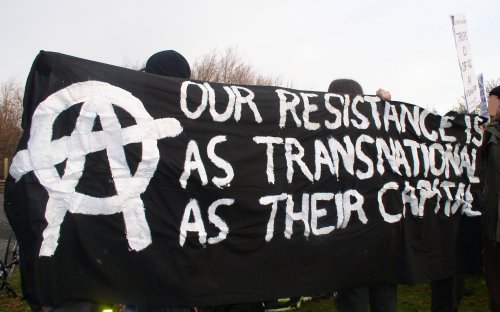 nice banner - with a slogan revival 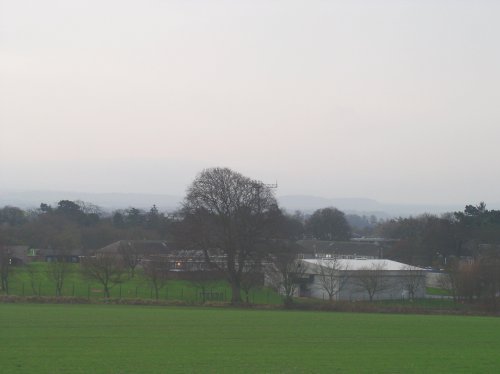 The protest took place just beside the busy A90, the atmosphere was good, with some protesters bringing foods, music, banners and christmas beards suitable to the occasion.

Weather was chillie but pleasant and there was quite some press interest as well. As the summit location was only known for about a week, the protest seemed quite small but also as successfull as possible in a small time span.

Several approaches via fields were made but demonstrators ended up being escorted back to the rest of the bunch upon discovery.

There were also some lovely Legal Observers present and Talk 107, Forth2, Deadline Press Agency and BBC Scotland made a quick appearance amongst other reporters.

Protesters were a mixed bunch from a variety of backgrounds, which a wide last-minute publication campaign of the protest achieved. The summit location near Edinburgh was just published about a week ago.

People stayed for about three hours till about 11am. Then the press had left and the only other thing would have been to wait till everybody would have got out of the summit again, which would have been most likely about 3pm or even later - and we were standing on the wrong side of the road unfortunately for that to make a bigger impact other than the NATO summit participants to have to take a side road. Apart from that, there did not seem to be so much to do and there was a distinctive lack of a toilet...