Protesters from the No Borders network are currently blockading the bases of Immigration Enforcement Officers in simultaneous actions across the country, stopping them from entering or leaving in vehicles. The protesters are currently blockading immigration reporting centres in Glasgow, Bristol and Portsmouth. The protesters have been there since early this morning, and they have said that they will stay there until they can ensure that today, families throughout the country will be safe regardless of where they come from. The protest coincides with the UN International Migrant's Day.

In response to the growing number of attacks on family homes by the Borders and Immigration Agency, the No Borders network have taken action to expose and prevent the sinister tactic of “dawn raids” employed against families and young children. In Bristol, the protesters were in place in time to obstrtuct bemused immigration officials, whose vehicles are now trapped in the car park. A frustrated police officer on the scene was heard to say, “how did you know a dawn raid was happening this morning?”

Dawn raids are used to gain custody of whole families in order to imprison them. Every day, doors are kicked in and families are snatched from their beds and taken to detention centres, where they are punished for seeking refuge in this country. They are taken away from their houses, jobs, schools and communities – their lives. Immigration Enforcement Officers come in the middle of the night as the children and their parents sleep in bed, and have not left to go to school or work. It also ensures no witnesses are present. There are no official statistics as to the number and regularity of these raids because the government will not release the figures. But the fleets of vehicles which have been blockaded this morning and the harrowing personal accounts of families indicate large-scale capacity. Today No Borders have highlighted just a few of these bases, which are hidden around the country.

Simon Summerhill of the No Borders network said, “we are here to expose what the government is doing – breaking down doors and snatching children from their beds in the middle of the night. Some children go to school, others go to prison. Immigration officers regularly target the vulnerable- families, children and the ill or traumatised, in order to boost their official figures of deportations.”

Nikki Dickinson of No Borders: “This is institutionalised child abuse. They take kids who have already been traumatised and cause them even more distress. The effects of snatch raids, detention and deportation on children are unmeasurable. The families have often been settled in an area for years, and their removal affects the community around them- family members left behind, friends and teachers at school, neighbours.”

1.No Borders is a coalition of groups who argue against all immigration controls and that freedom of movement is a basic human right.
2.The Scottish Executive Cabinet has recently announced its total and fundamental opposition to dawn raids - to any kind of forcible removal of children - and to detention of children. They also called for an amnesty, but they were rejected by Westminster.
3.For updates on the blockades, or for an interview with a No Borders activist, call: 07527463767

Dawn Raid stopped in Glasgow too!

The Reporting Centre and HQ for the Glasgow Immigration Enforcement Team is shut down this morning! People are locked on to the gates and a tripod is up blocking the vehicle entrance much to the frustration of a team of Home Office Enforcement officals who turned up at 5.30 expecting to leave to dawn raid a family this morning.

Come and join us!

10 No Borders members have targeted the Border and Immigration Agency offices at Norman House, Kettering Terrace in Portsmouth. 3 activists have locked on with arm tubes to gates, preventing the movement of one of the BIA vans with blackened windows that was due out on a dawn raid this morning. The fence is draped with a banner declaring "NO BORDERS. NO NATIONS. NO ONE IS ILLEGAL."

It the coldest morning of the winter so far and one or two solicitous BIA staff members have been checking to see that none of the protesters are suffering from hypothermia yet!

Dawn raids were due to take place at at least 2 locations, and have now been stopped!

Bristol - activists locked on to vehicles, fully supported, immigration officials have been prevented from carrying out a raid.Banner reads "No Borders! No Nations! Stop Deportations!"

Newcastle - The centre is blocked, activists locked on to main gate and supported.4 people locked on in arm-tubes, in full festive santa outfits with a banner saying "santa says no! no! no! to snatches!"

Portsmouth - Locked on by 4.30am, snatch squad frustrated and another dawn raid stopped! 10 people involved, 3 locked on to gate and swing barrier, banner reads "No Borders! No Nations! No one is Illegal!"

Bristol - Confident that the dawn raids have been cancelled for the day, the group have decided to finish the demonstration, and have gone off for a much-deserved hot toddy! All well, no arrests reported.

Newcastle - Another job well done, they have also finished up. No arrests, off to get a vegan fry-up!

Portsmouth - Police took more of an interest, and attempted to intimidate the activists with threats of arrest. They stood firm and faced the police down, and have now chosen to finish the demonstration with no arrests.

Glasgow - 2 d-locked activists removed by a cutting team and arrested. 1 still holding out, standing on a chair! More news as its available.

MASSIVE respect and solidarity with all those who took part in the actions today.

Glasgow: last d-locker was cut out and arrested, tripod is still standing. 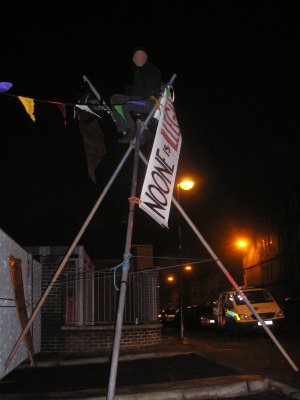 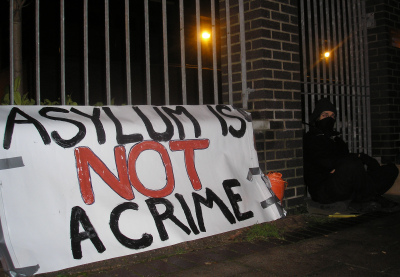 Both of the gates to Brand St were blocked 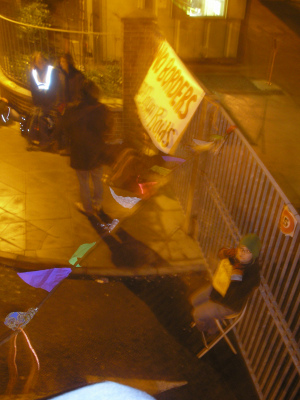 The view from the top of the tripod 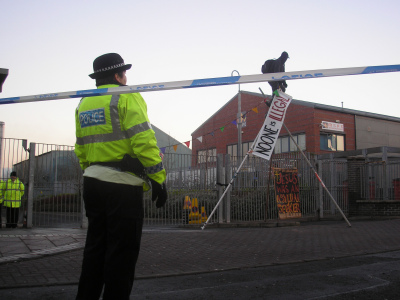 Sun's up, tripod's still up

some early photos from the blockade in Glasgow. It ended around 9:30. Text report to follow.

there was also an action at Dallas Court reporting centre in Salford/Manchester.