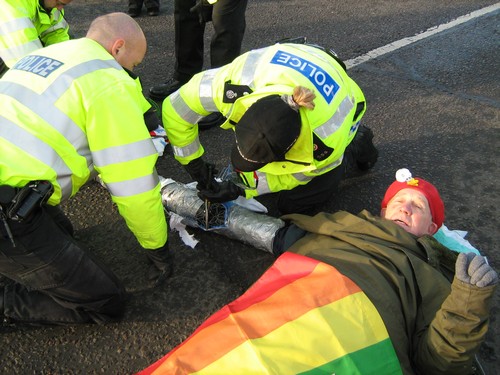 The court heard how, on 12 November 2007, Cllr Ray Davies, 77, from Caerphilly, and three others linked themselves together with metal pipes and lay down in the road to obstruct workers arriving by car via a private military road leading to the main entrance to Burghfield Atomic Weapons Establishment (AWE) near Reading, Berkshire - where Britain’s Trident nuclear warheads are assembled and maintained by nuclear profiteers Lockheed Martin (US arms giant), Serco and British Nuclear Fuels plc (BNFL), and where a new warhead components facility has just been rubber-stamped by the local council. Traffic entering the site was disrupted for well over two hours. Following arrest, the four activists were taken to Newbury police station, where they were held for six hours and charged with unlawful obstruction of the highway (under the Highways Act, rather than the MoD land byelaws).

Asked how he pleaded, Ray answered: "Guilty of trying to stop the destruction of our planet and the spread of nuclear weapons." The magistrate asked the court clerk whether anything was known about the defendant, to which she replied: “This man has a very long record. He has been to prison five times, and has recently appeared in court for his actions at Faslane nuclear submarine base." The chairman of the bench uttered something to the clerk, whereupon Ray was ordered to stand down. He was then led out of court by the usher.

When Ray asked what was wrong, the usher replied that the magistrate felt the case was so serious he could not deal with it, and so Ray had to go to a special courtroom. Late in the day, Ray was called to Court 4. Taking the stand, the charge was again read out, and Ray was again asked how he pleaded. This time, he told the magistrate that his plea was: “Guilty of trying to provide a future for my children, and for the world.”

He added: “I want to save taxpayers the £75billion which nuclear weapons would cost them; money which is so badly needed for our health, education and social services departments.

“No matter what happens, my campaigns against nuclear weapons and war will go on, and I have absolutely no regrets about my actions. On the contrary, I don’t think that I, or any of us, is doing enough to prevent the development of a new breed of nuclear weapon.

“Furthermore, as my local council's representative on the Wales Nuclear-Free Forum, I feel it my duty to make the strongest possible protest against both nuclear weapons and nuclear power.”

Ray had earlier told his family that it was highly likely he would not be returning home that evening, because of his long record of previous convictions.

Much to his surprise, when the chairman of the new bench asked whether anything was known about him, the clerk replied: "No, Mr Davies has a clean record and is of absolutely good character". The chairman looked at Ray and said: "Mr Davies, think yourself very lucky on this occasion. I am going to give you a conditional discharge for two years, and if you appear at any other defence establishment or commit any further crimes of this sort, then you will be brought back before the bench."

Ray stepped down from the stand and made a beeline for the exit. "Mr Davies", the chairman called out. "This is it", Ray thought; "they must have got hold of my previous records". Ray turned around, and the magistrate said: "Don’t rush - you could hurt yourself".

Ray then proceeded to walk slowly out of court, through the main entrance, and then ran to catch the next train back to Wales. That evening, he went straight to a meeting of the United Nations Association to plan the campaign against St Athans Military Training Academy.


**For further information and more photos of Ray in action at Burghfield in November, contact: dviesnik[at]yahoo.co.uk **

1. Report from original action included below.

THIRTEEN arrests as an estimated 70-80 anti-nuclear campaigners took part in direct action organised by Block the Builders against the nuclear weapons programmes at Aldermaston and Burghfield in Berkshire early on Monday 12 November, severely disrupting rush-hour traffic around the bases for two and a half hours.


At AWE Aldermaston, protesters sought to disrupt the construction of new multi-billion pound state-of-the-art facilities at the site, including the Orion laser. Campaigners say the new facilities will be used to develop new weapons of mass destruction, in collaboration with the United States. This, they say, breaches the nuclear Non-Proliferation Treaty, to which both the UK and the US are signatories.

There were three separate human blockades at Aldermaston, on the A340 close to Tadley Gate and Home Office Gate respectively. They were designed to block the entry of construction vehicles into the facility. Concrete-filled wheelie bins, lock-on tubes made from concrete and other materials, and superglue were used. Nine people of a wide range of ages, from Bradford, Cambridge and Devon, and from the Aldermaston Women’s Peace Camp (1), were arrested for obstruction of the highway and taken to Newbury Police Station.

At AWE Burghfield, on the outskirts of Reading - where the existing Trident warheads are assembled, before being sent by road convoy to the armaments depot at Coulport on the west coast of Scotland - four activists chained themselves together using arm lock-on tubes to block a private road which leads to the main entrance to the facility. A police cutting team took nearly two hours to arrive. The blockade was accompanied by a four-person choir from Turning the Tide (2) singing protest songs, and a violinist. All four blockaders were arrested for obstruction of the highway and taken first to AWE Aldermaston and eventually to Newbury Police Station. They included a 77-year-old man and members of Trident Ploughshares (3).

The arrests came in spite of a Thames Valley Police operation codenamed “Rumble”. All were held in police custody for around six hours, before being either cautioned or charged with obstruction of the highway. Supporters were waiting outside the police station as they were released.

A spokesperson from Block the Builders said: “We are living in dangerous times, largely due to the interventionist foreign policies of the United States and Britain. What we urgently need is a UN Nuclear Weapons Convention banning all nuclear weapons. What business do we in the West have threatening military strikes on Iran for its uranium enrichment programme, whilst at the same time spending billions of pounds upgrading our nuclear weapons facilities right here in the UK? The hypocrisy is plain to see. Would we not be better off spending the money on healthcare, education, tackling poverty and caring for the environment?”


The group plans to return for more direct action against Trident nuclear weapons in the near future.

http://www.tridentploughshares.org
4. Campaign for the Accountability of American Bases website:


For further information and more photos of Ray in action at Burghfield in November, contact: dviesnik[at]yahoo.co.uk