On 20th December at 13:30 15 activists targeted the ITT offices in Basingstoke, to protest against the takeover of Brighton arms manufacturer EDO MBM by the infamous ITT corporation, expected to be completed today. 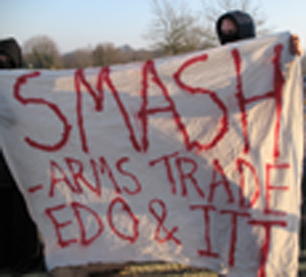 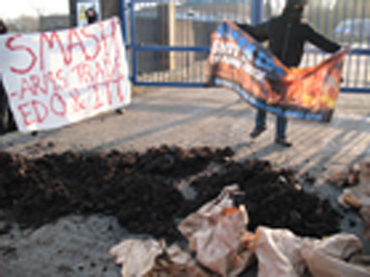 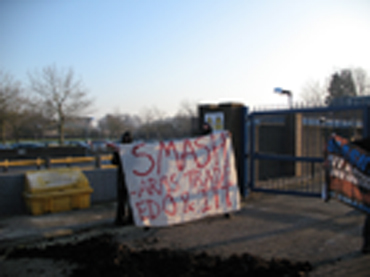 A large amount of horse manure was dumped at the front gate of the ITT offices and employees cars were leafleted, informing them of the decision by EDO shareholders to vote in favour of the takeover, and warning them of the ongoing campaign against the Brighton based arms manufacturer, which has cost EDO millions of pounds over the past three years.

EDO Corp. announced on 18th December that its shareholders had voted in favour of the company's acquisition by manufacturing conglomerate ITT Corp. The deal, worth about $1.4 billion, is expected to be completed today, 20th December.

ITT Corp. have an infamous reputation; colluding with fascist dictatorships from the 1930s onwards, including supplying Hitler with military equipment throughout WWII, and sponsoring the CIA backed coup in Chile led by Pinochet. In 2007 the company pleaded guilty to violating US arms controls over several decades up to the present day.

EDO MBM's Brighton offices have have been the subject of a direct action campaign since 2004. It has cost the company millions of pounds through court cases, blockades, roof top occupations and sabotage. EDO manufactures components for missiles which have been used to bomb civilians in Iraq, Afghanistan, Palestine and Lebanon.