Enclosed below is the text of a letter to the Chief Constable of Sussex Police, Martin Richards, calling for him to apologise for the behaviour of his officers at the demonstration against the bombing of Lebanon in August 2006. Also attached is an article in the Brighton Argus of 22-23 December 07. 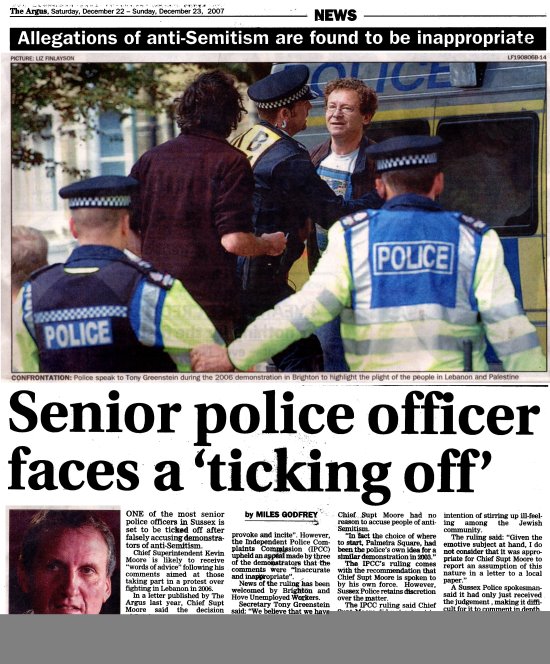 You will no doubt be aware that the Independent Police Complaints Commission has upheld a complaint made by Linda Catt, Ann Hallam of Palestine Solidarity Campaign and myself concerning the policing of the demonstration against the bombing of Lebanon on Saturday August 19th 2006.

This is the second complaint which has been upheld against the officer responsible, Chief Superintendent Kevin Moore, who was formerly Divisional Commander of Brighton & Hove Police and is, I understand, now Head of Sussex CID. The first complaint related to false allegations by Mr Moore that notice was not given regarding the first demonstration against the bombing of Lebanon on Sunday July 30th 2006.

The complaint which the IPCC upheld concerned a letter that Mr Moore wrote to the Argus newspaper of August 26-27th 2006. In it he wrote that:
‘I can only assume the intention of the demonstration in an area where there is a large Jewish population was a deliberate attempt to provoke and incite.’

This assumption on Mr Moore’s part formed the basis of the most hostile and aggressive policing of a demonstration in Sussex that I have experienced in over 30 years of living in Brighton. The assumption was however entirely without foundation. Although I accept that you have only just taken over as Chief Constable and are new to the area, nonetheless this matter is now your responsibility.

The IPCC’s findings are quite clear. Despite bending over backwards to give Sussex Police the benefit of the doubt, the IPCC nonetheless finds that:
‘However, I do not consider that there is sufficient evidence to reasonably support the assumption that the protesters specifically chose a Jewish area as the rallying point for the march with the deliberate intention to provoke and incite. As such, and given the emotive subject at hand, I do not consider that it was appropriate for Chief Superintendent Moore to report an assumption of this nature in a local paper.

Following, and for the reasons provided above, I consider that the allegation that ‘Chief Superintendent Moore brought discredit upon the peace movement by branding them as anti-Semitic and accusing the march organisers of a deliberate attempt to provoke and incite’ is partially substantiated in this case.’

As the IPCC notes, an accusation of anti-Semitism is an emotive one. Before making such an accusation, one would expect Kevin Moore to have had pretty solid evidence. Yet it transpires that he was completely ignorant about the reasons why Palmeira Square was chosen as a venue for the start of the demonstration. In a conversation with Kevin Moore, which I took the precaution of tape recording, a copy of which the Police have, the following exchange took place:
TG: In fact the original reason for going to Palmeira Square, was four or five years ago, there was a similar demonstration, and the Police said we should go from there. It was the Police who decided that.
KM: I can’t comment on things that happened five years ago when I wasn’t here.
TG: Well if it was anti-Semitic today presumably it was anti-Semitic then
KM: All that I can say as well is that obviously in preparation for the event on the 19th August we made contact with the local Jewish community leaders within the synagogues and obviously they were of a similar impression to the extent where on at least one of those places they were keen to finish their worship that morning earlier so that people could get away earlier.

In fact it wasn’t at all obvious why the Police should contact leaders of the Jewish community about a demonstration against the bombing of Lebanon, unless the Police had a priori decided that British Jews bore some responsibility for that bombing and were therefore legitimate targets for peoples’ anger. In fact some might say that such a viewpoint was in itself anti-Semitic, as it associates British Jews with something they cannot possibly have any influence or control over, still less responsibility for. There are of course those, primarily Zionists, who would argue that opposition to the Israeli state and/or its actions is anti-Semitic, however The Police have no business in endorsing such views.

One would also expect a senior Police Officer, before making allegations of anti-Semitism, to have been in full command of the facts concerning the antecedents of the use of Palmeira Square. By his own admission, Kevin Moore made no such inquiries. Mr Moore also ignored the fact that the area in question also happens to be the centre of Hove’s Arab population, larger in fact than the Jewish population. One can only presume that Arab residents of Brighton were invisible to Mr Moore.

There is no evidence that any of the demonstrators were interested in, or even aware of, the religious or ethnic complexion of the residents of Palmeira Square. There was no reason why they should be. Yet, on the basis of one resident’s political objections to the march, Kevin Moore decided effectively to brand the whole march as anti-Semitic or as he describes it, a ‘racial incident’. He did this through a wilful misinterpretation of the findings of the MacPherson Report into the death of Stephen Lawrence.

The other reason given by Kevin Moore for his statement was the alleged ‘serious racial assault’ on a person describing themselves as ‘half Jewish’. Yet when I informed Kevin Moore, in the same conversation as above, that I had personally witnessed what had happened and that there was no assault, his reply was that ‘Yes but the point is that’s your interpretation.’ At no stage did he request that I come to a police station to give a witness statement. Perhaps you can confirm that this is not normal police practice? The only conclusion that can be drawn from this is that Kevin Moore himself realised that there was no assault and was using this allegation as a pretext for coercive policing.

I am therefore calling upon you to both accept the findings and recommendations of the IPCC Report and to apologise publicly for the statements that Kevin Moore made regarding the motives of the demonstrators.