The youth and the rest of the inhabitants of Villiers-le-Bel in the Paris northern suburbs had good reason not to believe what the authorities asserted as the cause of death of the young boys Larami and Moushin at the end of November, killed in a collision with a police car. 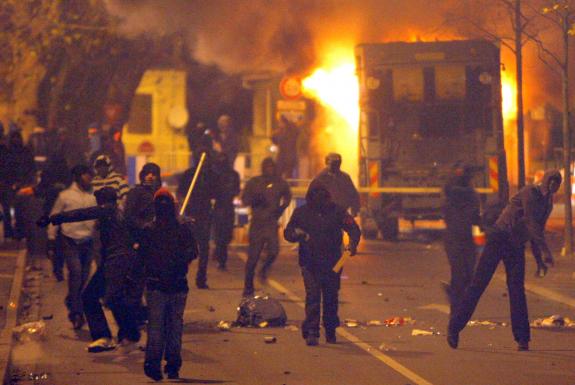 Too many inconsistencies and contradictions ruined the official version: location of the impact on the car which did not correspond to the official report, extent of damage incompatible with an accident at low speed, location of the bodies several tens of meters from the intersection where the mini-motor bike would have burned the priority.

It now appears that TWO police cars were at the scene of the accident. This Thursday morning on radio France Info, the Collective of the Families involved reported having received a dozen testimonies indicating the presence of two vehicles: the one which caused the accident (visible in photographs) and a vehicle of the BAC (the sinister Brigade Anti Criminalité). The presence of the 2 vehicles "in the perimeter" of the accident (!) was confirmed by the prosecutor a little later in the morning.

So, contrary to what had been claimed since the beginning, it was not a regular patrol in a police car travelling at low speed. The new official version is that these vehicles had been alerted to intervene in a pursuit and that the cops implicated in the accident, not knowing the route, were looking for their way on a map (while moving at a slow speed!) when they were run into by the mini-motor bike. The BAC car supposedly then pulled over beside the accident scene before setting out again a little later (perhaps evacuating the cops involved, according to certain testimonies).

Question: why was this car never previously mentioned if it had anything to do with what actually took place? What was there to hide? What really happened?

This is not just a lie concocted by a few cops: the first version, which had been taken up by all the media as being the truth--without so much as a raised eyelid, had been announced by the Director of the National Police himself (a close relation of French President Sarkozy who was appointed to give him the upper hand in the police). This makes it a State lie!

Sarkozy accused the young rioters of being thugs when they exploded in anger confronted with this new instance of “police brutality", but the real “thugs” are the liars and exploiters who are at the head of State! It is they who it will be necessary to combat and bring down by means of proletarian struggle.
.
Solidarity with Victims of the Police!
Release of Youth and Proletarians Imprisoned for the “Crime” of Struggle and Rebellion!
Truth for Larami and Moushin!