Capitalist greed leads corporation to cut labour costs to the bone. Will workers and consumers fight back, asks Laure Akai? 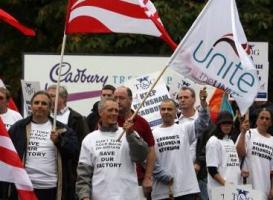 The Cadbury Company plans to shut down its Keynsham plant, which would result in 500 lost jobs. Another 200 jobs will be cut in Bournville. These jobs are to be transferred to Poland by 2010. (The company plans to start additional chocolate production in Poland in 2008. It has also signed a deal with Barry Callebaut in Poland to outsource some production. Callebaut outsources about 1/3 of Cadbury's total production.)

As Cadbury opens a new chewing-gum factory in the Walbrzych Special Economic Zone this January, the company has been negotiating for even more taxpayer sponsored financing and tax breaks to accompany the opening of a new chocolate factory. If all goes as they want, more jobs may eventually be transferred to Poland.

Officially, the company claims it has not chosen Poland for the building of a new chocolate factory and says it is still considering an investment in Slovakia instead. Like other corporations before it, Cadbury is busy playing a game with governments eager to claim they have “created new jobs” in their countries, a game in which the corporation asks for more and more tax breaks and subsidies and waits to see which country with outbid the other.

At the end of November, the Polish Ministry of Finance started to work on amending the law in order to allow Cadbury to get more subsidies. Currently, the government gives “grants” to companies in several industries which promise to create jobs in Poland. The Ministry claims that it is interested in supporting projects in food processing and paper – which is known to refer to potential Cadbury and Mondi investments. Besides a special “grant” Cadbury can count on other incentives. Their current investment in the Walbrzych Special Economic Zone included lost-cost land and property and significant tax breaks. Firms which qualify for state aid can also take special low-interest loans which can be to a large extent written-off.

Workers in the UK have been organizing against the job transfers and have considerable support from some local communities. But as director Ken Loach pointed out at a recent rally which he attended, you cannot count on companies to do the right thing out of conscience and some sort of corporate campaign should be organized. There are people who have already promised not to buy Cadbury products should the company go ahead with the planned job relocations.

The corporate greed at Cadbury's, just like at many companies, is fueled by investors looking to make a huge profit surge overnight. In Cadbury's case, the most troublesome investor is Trian Management Fund, run by billionaire investor Norman Peltz. Trian, together with Qatar Holding may only own 4.5%, but apparently it is a packet significant enough to make waves at Cadbury. Trian has called on Cadbury to restructure and economize in order to raise the value of shares by 60% within the next 2-3 years.

(Peltz is famous for trying to force himself and his financial ambitions on companies. It was Peltz who was behind the famous proxy battle at Heinz last year.)

Overall, Cadbury plans to cut 7,500 jobs in better-paid countries and close as many as 10 factories. Cadbury is also making plans for expansion in Turkey and Romania as well as in Poland. At the end of 2006, Cadbury decided to outsource IT and “back office” work (such as accounting). The company already moved about 500 jobs to a company called Genpact. Most of these jobs are in India but some are in Romania and China.

The jobs sent to Poland it seems is just the tip of the iceberg for the confectionery giant.