6 Things You Must Do

Another list? Well, yes, but one that actually addresses the root of the environmental degradation we are causing. This is one new year's resolution that is worth keeping. 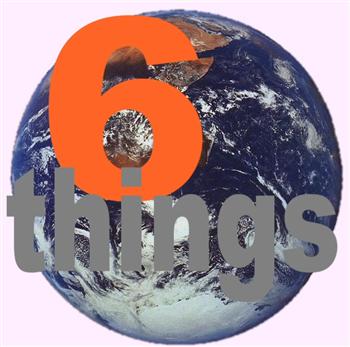 Lists are useful things: shopping lists, lists of things to do, lists of addresses, lists of names and numbers, lists of articles to write. I do keep a list of articles to write, but making a list of “x ways to save the world” has never been among them. A while ago I did write an article called “4 Essential Ways To Save The Earth”, which was not exactly a list (it was over 6000 words long), more a way of describing the types of systems that have to be changed. But it was a good way of putting my thoughts in order.

Then the environmental blogs started to fill up, much like the environmental books had years before, with lists and lists of things you should do in order to be a good green person. Meanwhile the Earth carried on heating, the forests continued to be cleared, the oceans became more acidic and the population kept growing and consuming more and more. I have not seen a single list that actually takes people to a genuinely sustainable place, let alone addresses the root causes of our situation.

It’s about time that was put right.

Not too long ago I visited a school to talk about climate change, and realised that I would probably be asked to tell the students what they should be doing to make things better. Buy organic milk; recycle more; change your lightbulbs; do lots of other really trivial things that on their own will have virtually no impact. How could I get around this problem without frightening the students into retreat, leaving them confused as to the best actions or giving them something that wasn’t worth the paper it was written on?

Finally, after some time breaking things down, analysing everything I know about the way systems (cultural and ecological) work, throwing out the trivial stuff and talking to my 10 year old daughter, I whittled everything down to just 6 main subject headings. They need a little explanation individually, as does the thought behind them. Essentially, if you take them all together and if a large enough number of people follow them, two things will happen:

1) Humanity will become far more sustainable, reversing the trends we are seeing in our consumption and damaging activities.

2) The systems that drive this culture’s terrible behaviour will break down, having no option but to change or die.


Each action taken alone is enough to fundamentally change and even take down one or more of the damaging systems that the industrial world makes us think are essential – they are not. These systems include the motor industry, the industrial food production system, the corporate fiscal system and many others. Many of them are interlinked and dependent upon each other, and when one falls, others can fall too. The real beauty of the 6 Things You Must Do is that they are all eminently achievable: they can be completed in one go or in steps, and you can concentrate on one or two at a time, so long as you get there by 2030, the year that we have to have become sustainable if we are to prevent runaway and irreversible environmental change.

I am not saying that the 6 Things are easy to achieve. People have been hardwired in the West, and increasingly in other parts of the world to behave in a certain way – an orthodoxy – which even the environmental organisations take as read. Not only is our behaviour controlled and thus difficult to change without considerable motivation, there are many things that are not achievable without fundamental changes taking place in society. But behaviour is the most important. You may think you are making great sacrifices, but you are actually making your life far more satisfying and in tune with how humans naturally behave.

So, here are the 6 Things You Must Do, if you want to ensure that we have a future on Earth:

CONNECTING : Get back in touch with your planet. You are part of nature so act as though you are. Understand your place in nature, how you affect it and how it affects you.


CONSUMING : Don't buy anything that you don't need. If you have to buy something, remember the 4 R's: Reduce, Repair, Reuse and Respect.


EATING : Become vegan, or as near as you can to remain healthy. Buy local. Eat simply.


LIVING : Reduce the energy used in your home to the bare minimum. Change your behaviour to allow for this. Become energy independent.


TRAVELLING : Travel as little as possible. Don't fly. Don't drive. Instead: walk, cycle, use the bus, go by train.

Simple, challenging and very effective. If you want more details then write to me at

keith@theearthblog.org. There will be a lot more information and help in my forthcoming book, A Matter Of Scale [