U.S. gangster policies in the developing world have come home to roost, yet again. 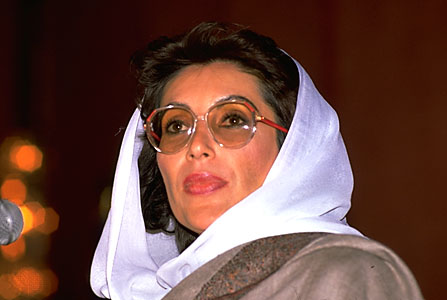 Editorial Note: U.S. gangster policies in the developing world have come home to roost, yet again. Washington never seems to learn that its thugs and gangsters change only the quality of their suits and caliber of weaponry - but never their spots. But then again, neither did the Gottis and Gambinos, who were no more criminal-minded than American foreign policy-makers. After decades of propping up and making continual use of Pakistan's permanent military state-within-a-state, the Americans decided to set up their loyal capo, Pervez Musharraf, for a fall. The Bush Gang chose to temporarily ameliorate their own political problems by demanding that Musharraf accept his nemesis - the thoroughly corrupt civilian, Benazir Bhutto - as a partner in governance. It was like a ceremonial Mafia kiss on the lips from Don Giorgio Bush. Naturally, the Pakistani military Mafia's interests had to be preserved, no matter what the Washington Mafia "family's" wishes. So Bhutto got whacked.


"The former prime minister was a top-of-the-line international crook - and so were her enemies in the Pakistan military."

The American corporate media have declared Benazir Bhutto an instant saint - part of their daily revision of history. In fact, the former prime minister was a top-of-the-line international crook right up to the moment of her assassination, with corruption and money-laundering cases pending against her in Spain, Britain, and Switzerland. Copious documentation has been compiled of huge kickbacks from selling Pakistani government contracts and monopoly trading rights to companies in Poland, France and western Asia. Bhutto and her husband were world-class kleptocrats - not democrats.

But then, her enemies in Pakistan's military are also crooks - a thoroughly corrupted culture of millionaire majors, colonels and generals who control whole sectors of the nation's horribly distorted economy. Like Bhutto, the military treat government service as a license to steal. Unlike civilians, however, the military have the muscle to maintain and expand their monopolies.

Much of that muscle has been provided by the United States. Pakistan's birth in the partition of British India in 1947 coincides with the start of the Cold War. The much larger, newly independent Indian government was vaguely socialist and non-aligned in foreign policy - a cardinal sin in the eyes of the United States. The U.S. saw Pakistan's military as an important asset in keeping India off balance and to combat Soviet influence in south Asia.

No sooner was Pakistan founded than a British Major General, who was then Deputy Chief of Staff in the Pakistani Army, set up the Inter-Service-Intelligence agency, the ISI, a huge network that combined the functions of the U.S. CIA, military intelligence, and domestic security. The ISI is a military state-within-a-state - a very convenient partner for American military and intelligence objectives in the region. During those periods when Pakistan was nominally ruled by civilians, the U.S. continued to rely directly on the ISI as its geopolitical ally. When the military ruled directly, the state and the ISI were one. This uniformed, criminal class methodically bullied itself deep into the economy and infrastructure of the nation - rule by gangsters who were, in turn, championed by the Americans as bastions of "stability" in Pakistan.

The American gangsters made great use of the Pakistani gangsters. Pakistan was the rear base in the U.S. and Saudi Arabian-financed jihad against the Soviets in Afghanistan. Pakistan virtually invented the Taliban which, with no discernable U.S. objection, took over Afghanistan in 1996. Benazir Bhutto was then prime minister, and supported the Taliban's ascension to power. The Big Gangster - Little Gangsters relationship between the U.S. and Pakistan's military changed - like everything else - after the events of 9/11, which the Bush regime perceived as an opportunity to become Supreme Gangster of the Planet. The Pakistan military mafia, in the person of dictator Pervez Musharraf, was threatened with being bombed "into the stone age" if it did not turn on its Taliban children and, in effect, purge those sections of the military that had given birth to the Taliban. Musharraf knew he could not do this without destroying his own military mafia, but for six years he pretended to try. As Bush's global offensive collapsed in Iraq and the Taliban rebounded in Afghanistan, the Americans made Musharraf an offer that he - and/or his military sub-gangsters - could not accept: share power with Benazir Bhutto, the queen of civilian corruption and suddenly the darling of Washington. As life-long gangsters, the Pakistani military recognized that following Don Giorgio Bush's orders threatened their "family." So Bhutto had to go.

America rules like a gangster, favoring gangster clients everywhere it goes. But gangsters all over the world know when they are being set up, and they fight back. That's what happens when Washington becomes the headquarters of a global Sopranoland.