For Barry "On the early morning of Xmas, while everyone is having toast, ALF activists raided Renogenic animal lab in Science University of Malaysia. We climbed through window and break the exit door. We saved 8 rabbits which are in bad conditions..." ALF MALAYSIA 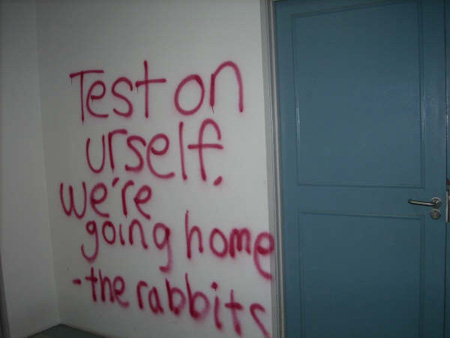 "On the early morning of Xmas, while everyone is having toast, ALF activists raided Renogenic animal lab in Science University of Malaysia. We climbed through window and break the exit door. We saved 8 rabbits which are in bad conditions. There are a few patches on their body.

We put them in the boxes and bring them out from this misery.

Spray painted 'Test on yourself, we are going home – the rabbits' 'This is just the beginning, close down or we will come back'

***Barry Horne, an animal liberation activist died in a UK prison hospital on November 5 2001. He had been sentenced to 18 years in prison for various criminal damage and arson attacks mainly against companies involved in vivisection.

In prison he went on hunger strike several times in protest against government support for the vivisection industry, and their broken pre-election promises about animal experiments. The third of these hunger strikes lasted 68 days, and Barry never fully recovered.***

"December 9th, Minsk (Belarus). Show-windows of fur shop are covered by a
paint. The lock is filled by glue."

"Anti-fur protestors launched paint attacks on two Dublin city centre
clothing shops over the Christmas holiday. Red gloss paint was thrown
across the front of The Turet and the Harlequin stores, both on Castle
Market behind the George's Street Arcade. No one has yet claimed
responsibility for the attacks, which took place early on Christmas day."