Liberty City 7 Trial: A Foretaste of Things to Come

The U.S. government reached deep into an impoverished neighborhood of Miami to find seven Black faces to attach to the bogus "war on terror." The Liberty City 7 - unemployed, semi-employed and sometimes homeless - were the most unlikely subjects imaginable to entrap as terrorists "prepared to wage a full ground war against the US." 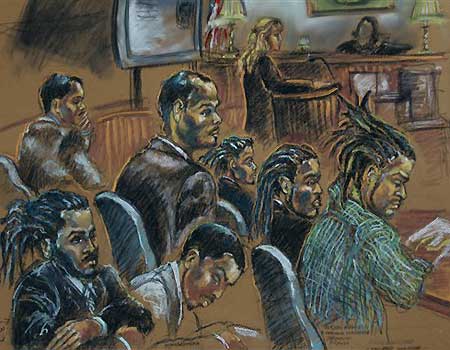 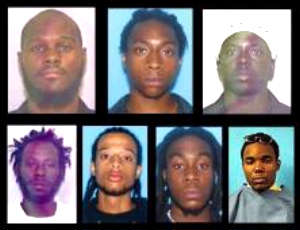 The U.S. government reached deep into an impoverished neighborhood of Miami to find seven Black faces to attach to the bogus "war on terror." The Liberty City 7 - unemployed, semi-employed and sometimes homeless - were the most unlikely subjects imaginable to entrap as terrorists "prepared to wage a full ground war against the US." Nevertheless, with the help of two well-paid Arab agents, the feds attempted to construct out of whole cloth a Black conspiracy to fight Al Qaeda's war on U.S. soil. A Miami jury didn't buy it, resulting in a mistrial in six cases and outright acquittal in the seventh. But so great is the Bush regime's need for internal "enemies" to validate its assault on the rule of law at home and abroad, the feds insist on pushing for another trial. As always, Blacks are the "usual suspects," even when no crime has occurred.

Liberty City 7 Trial: A Foretaste of Things to Come


"It was a classic case of entrapment."

The U.S. government war against black people continues unabated despite an acquittal and mistrial in the case of the Liberty City 7. By doggedly insisting they will press for a new trial, the feds signal a determination to bring the bogus "war on terror" to the ghetto, whether they can assemble a credible case for guilt or not.

The seven defendants were charged with several counts of conspiracy to commit terrorism. Included in those counts was, conspiracy to levy war against the U.S. government and conspiracy to cooperate with Al Qaeda, as well as conspiring to maliciously damage or destroy property by means of explosives.

In June of 2006, the national TV audience watched as dozens of police and FBI agents dressed in military garb and armed with automatic weapons assaulted a deserted warehouse in the middle of the Liberty City section of Miami - one of the poorest neighborhoods in the country. With all that firepower, something deadly serious must have been afoot, right? But it soon became clear that the Haitians and African Americans targeted as "terrorists" - Lyglenson Lemorin, Patrick Abraham, Stanley Grant Phanor, Naudemar Herrera, Rotschild Augustine, Burson Augustin and Narseal Batiste - were unemployed and semi-employed brothers from the hood who could not possibly pose a threat to the security of the United States. At the time of their arrest police found army boots and one registered handgun - the extent of their "arsenal."

"Something quite sinister was being hatched - but not in Liberty City."

Yet, US Attorney General Alberto Gonzales declared, "these men were prepared to wage a full ground war against the US." The seven down-on-their-luck brothers were described as, "as dangerous as al Qaeda." When indictments were handed down the FBI pronounced it, "yet another important victory in the war on terrorism."

Indeed, something quite sinister was being hatched - but not in Liberty City. The victims of over 300 years of organized and often state-sanctioned terror were now themselves being branded as terrorists. Talk about adding insult to injury.

So who were these brothers - who had no maps, written plans or weapons to wage "a full ground war" against a single police precinct, much less a super-power - and how did they get caught up in the federal trap? All were adherents of the Moorish Science Temple which was founded by Noble Drew Ali in the earlier part of the last century. The religion has taken some of its doctrine from Islam, Christianity and the sayings of its founder Ali. The majority of adherents are northerners and the sect had a sizable following in the prisons around the country in the 70's and 80's.

Their local leader was Narseal Batiste, who apparently attracted attention to himself by going around the neighborhood talking tough about his opposition to the workings of the government. Batiste made the acquaintance of an Arab shop keeper and convicted wife batterer named Abbas al-Saidi - a government informant. Al-Saidi was paid $40,000 to direct Batiste and his motley crew to Elie Assad, another government informant, who was paid $80,000 to pretend he was directly connected to Al Qaeda. Assad led the rag tag group to believe there was money to be made by working with him.

After Assad set the group up in a fed-funded and surveillance-wired warehouse the hapless brothers are said to have requested $50,000 for combat boots, uniforms and equipment. Assad in turn suggested that they swear loyalty to Al Qaeda through an oath administered by himself.

The "plot" was concocted entirely by the FBI in order to put a ghetto face on "terrorism."

"Most of the group were homeless and sleeping in their little warehouse."

It was a classic case of entrapment. The government recorded over 1500 hours of conversations, primarily between their guy Assad and Batiste - but the most they got was Batiste implying that to disrupt things in the US one would have to attack targets like the Sears Tower, yet never saying that he himself was planning to blow it up.

Batiste admitted during his trial that he was working a con and that he realized that these two Arabs had money and he was trying to get some of it. "I was behind a couple of months on the rent, the children had no clothes," explained the father of four. "There was no food for a couple of days. There was a lot of pressure on me at the that time." Most of the others were homeless and were sleeping in their little warehouse. Batiste's lawyer said the group actually wanted to start a construction company with the Arab's money - a credible claim, since the Liberty City 7 were essentially broke. Even the two federal snitches doubted that their impoverished entrapees had any real notions of carrying out terrorist acts.

But even with such flimsy and obviously orchestrated evidence most people in Miami would have predicted these brothers would be convicted anyway. After all, Miami has a very right-wing orientation, with its large population of revolution haters and despisers of any kind of redistribution of wealth. Add to that, a healthy dose of racism and you have a recipe for making sure you can kiss your black behind goodbye.

"One farcical show trial is not enough."

Oddly, the government failed miserably. A number of black folks were on the jury and stood up to the bully - exposing the proceeding as a bumbling show trial.

But the U.S. government has no shame and does not give up easily. One farcical show trial is not enough. Despite the outright acquittal of Lyglenson Lemorin and "not guilty" votes by half the jury on the other six defendants, the feds want another crack at the case. They are also intent on punishing Lemorin through deportation to Haiti.

This ought to serve as wake up call to all of us in the black community. There are folks we should be afraid of, but it's not a bunch of rag tag brothers from the hood looking to con somebody. It is the US government and its representatives that we should distrust and fear. If they can whisk some guys off the street and call them terrorists and spend thousands of dollars to make their lies stick, then none of us are safe.


* Mel Reeves is a political activist living in Miami. He can be contacted at

This e-mail address is being protected from spam bots, you need JavaScript enabled to view it .