On Saturday 5 January, in solidarity with the National League for Democracy (NLD), the Burmese monks and the oppressed people of Burma, members and supporters of Wrexham Women for Peace held a demonstration at the TOTAL petrol station on Hoole Road, Chester, calling for a general boycott of TOTAL until it severs its links with the Burmese military junta. 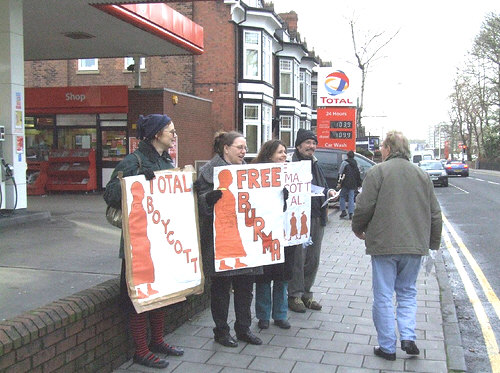 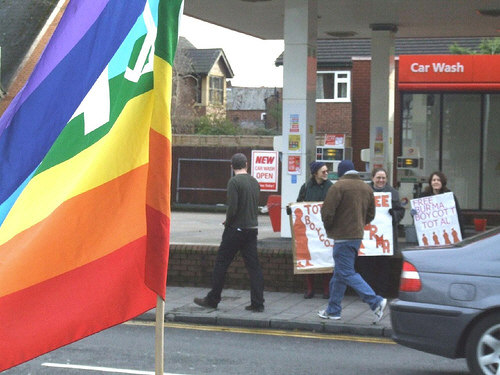 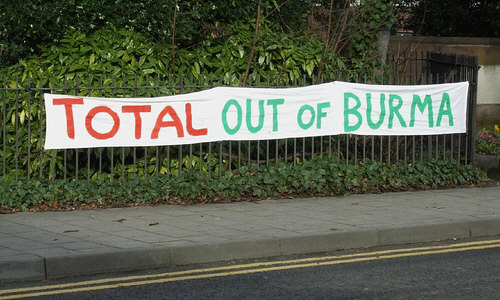 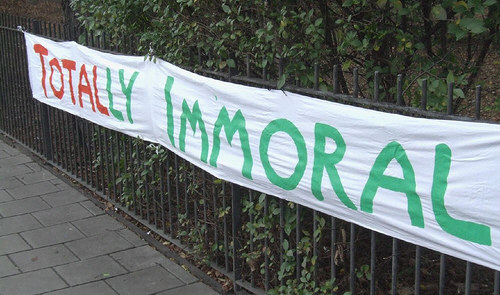 On Friday 4 January, in an action to mark the 60th anniversary of Burma’s independence from British colonial rule, members of the National League for Democracy (NLD) – the main opposition party to the country’s military junta – held a vigil in front of the party’s headquarters in Rangoon. Dressed in white convicts’ uniforms, the demonstrators called for the release of detained NLD leader Aung San Suu Kyi and over 1,000 political prisoners currently detained by the military regime. Spokesperson for the NLD, Nyan Win, expressed hope that “democracy and human rights will prevail in the country one day.”

Pyinya Zawta, a member of the underground monks’ group, the Alliance of All Burmese Buddhist Monks, said: “On this our Independence Day, I want people to enjoy real freedom and independence. As long as we are not free, we must demand freedom.”

Protesters put up large banners opposite the petrol station with the words “TOTALLY IMMORAL” and “TOTAL OUT OF BURMA”, displayed a peace flag and placards, and handed out leaflets to passers-by and motorists. Many motorists decided to fill up elsewhere, or vowed not to return to the petrol station again.

A spokesperson for Wrexham Women for Peace said:

"Burma is a country rich in natural resources, yet its people are poor and hungry. Almost half of government spending goes on the military; very little is spent on health and welfare. There are more child soldiers in Burma than in any other country. Rape is used as a weapon of war. Many of Burma's political prisoners are tortured by the regime.

“Years of co-operation between the West and the military junta in Burma have contributed to the suffering of the ordinary people by strengthening this brutal and inhumane regime. Following widespread condemnation and a number of human rights lawsuits, other oil companies have pulled out of Burma, yet TOTAL continues its association with the regime, along with Chevron-Texaco. We urge everyone to boycott these companies until they stop supporting the bloody oppression of the Burmese people.

“British condemnation of the military regime’s recent violent suppression of dissent in Burma has been universal, but I believe that it is important to translate our objections into action, and a very simple way to do this is to withdraw our custom from TOTAL and Texaco.

“Supporters of the boycott can also write to TOTAL via the Burma Campaign website at:

It's an unhappy new year for Totalitarian Oil in London, as protests restart this week. Why not make a new year's resolution to join us?


For peace, democracy and human rights for the people of Burma.

Well done folks. good to see some action at total garages again. Brighton demos to resume again this saturday morning (12th january). meet at 11.30 outside the pavillion or meet us at the garage in Kemp town from 12 onwards. all welcome. bring your imagination and inspiration!

Total Out Of Burma Brighton

Great to hear that demos are starting up again all over.

Wrexham Women for Peace will be back in Chester on 26 January, hopefully with more people.

Do join us if you can, Chester people. :o)