AWPC challenges denial of right to freedom of assembly

A legal challenge to byelaws at the Atomic Weapons Establishment (AWE) Aldermaston will take place at the High Court in London on 1 February 2008. 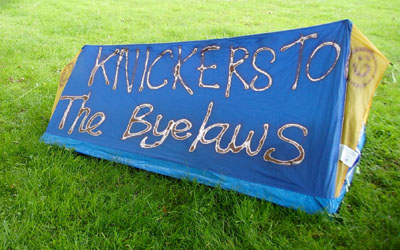 A legal challenge to byelaws at the Atomic Weapons Establishment (AWE) Aldermaston will take place at the High Court in London on 1 February 2008; the case is brought by Public Interest Lawyers on behalf of a member of the Aldermaston Women’s Peace Camp (AWPC). The claimant is seeking a judicial review of the Ministry of Defence’s (MoD) decision to introduce, in 2007, byelaws which deny the women’s peace camp their right to freedom of assembly and threaten the 22-year-old monthly camp.

This case has significance beyond Aldermaston and the peace camp. The restrictions on protest at Aldermaston under the byelaws are part of a range of police powers, including the Serious Organised Crime and Police Act 2005 (SOCPA, see below) which have the effect of denying the right to protest at military, nuclear and government sites across the UK. A programme of reviewing the byelaws is in progress across the country.

It will be argued that the criminalisation of camping (AWPC’s core activity) as set out in byelaw 7(2)(f) is unreasonable, unjustified and contrary to ECHR articles 10 (freedom of expression) and 11 (freedom of peaceful assembly). The claimant is seeking a review of: whether the decision taken by the Ministry of Defence to introduce the byelaws was lawful and proportionate; the lawfulness of some of the byelaws; and the refusal of the MoD in May 2007 to fully amend the byelaws following a public consultation period.

An oral hearing to determine whether the High Court will proceed with a judicial review of the above byelaws is scheduled for 1st February 2008. If the decision is made to proceed, the arguments will be heard immediately.

The new byelaws – which came into force at Aldermaston on 31 May 2007 - were put out to consultation in April 2006. In their original form, they would have criminalised all forms of protest, including assemblies and processions, handing out leaflets and holding placards. AWPC formally appealed to the Byelaws Review Committee citing the Human Rights Act and, with support, succeeded in removing most of these prohibitions from the final version. However, clauses remain which criminalise “camping in tents, caravans, trees or otherwise”, lighting bonfires and “attach[ing] any thing to, or place any thing [for example, a banner] over any wall, fence, structure or other surface”: activities which form an integral part of the Aldermaston Women’s Peace Camp.

The Aldermaston byelaws were introduced as part of a package of measures to provide “protection against unauthorised trespass and unacceptable activities at military establishments”, including at the Nuclear Licensed sites at AWE Aldermaston and Burghfield. [1]

Other measures included the criminalisation of trespass at the site. Section 12 of the Terrorism Act 2006 - amending sections 128-9 of the Serious Organised Crime and Police Act 2005 (SOCPA) - provided for the offence of criminal trespass at protected nuclear licensed sites; SOCPA entered into force at Aldermaston - via the Terrorism Act - on 13 April 2006. [2] To date, one woman has been arrested and charged under SOCPA; the case is due to be heard at Newbury Magistrates Court on 28 and 29 February.

The increase in police powers to control and restrict protest

Protest at Aldermaston has significantly increased since 2002, when AWE ml (a consortium of Lockheed Martine, BNFL and Serco) published a Site Development Strategy Plan. This document set out plans for the massive redevelopment of the site, to construct facilities which AWPC believed would equip the UK government to test, design and build the next generation of nuclear warheads. Despite the start of the building programme, the fact that new facilities would be used for a new generation of nuclear weapons was repeatedly denied by AWE and the government - almost up until the March 2007 parliamentary vote in favour of replacing Trident.

On 9 August 2007, charges against ten women (and a dog) – who had been the first group arrested under the Aldermaston byelaws - were dropped. The women had been charged in June 2007 with “camping” and “lighting a bonfire”, following the introduction of new bylaws. No subsequent attempts have been made to arrest the women. The MoD police are reportedly awaiting the outcome of the legal challenge.

Aldermaston women would welcome support outside the High Court, The Strand, London on 1 February.
For further information, contact: 07791 257709 or

info@aldermaston.net
For further reading on the Aldermaston byelaws, see