Despite the assurances that the Commissioner MUST give "authorisation" for demonstrations, Maria, from Parliament Sq, has been denied that very thing. She will now be holding demonstrations OUTSIDE Downing Street next week. She welcome you if you feel you can support her there, no matter how briefly - Monday 14th - Thursday17th 10am - 2pm and on Wednesday 16th between 5pm and 7:30pm 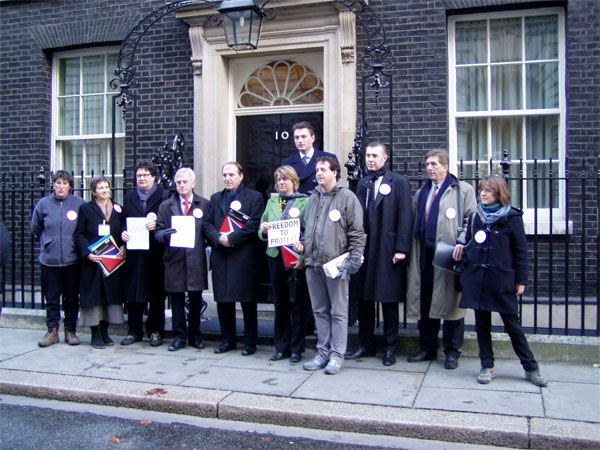 On Thursday 10th January Parliament Square's Maria had a SOCPA request to demonstrate turned down although the legislation states that when notice of a static demonstration is given, the Commissioner MUST authorise it.

Maria applied to demonstrate inside Downing Street - asking that SOCPA be repealed and that no new police powers be introduced across the UK (as threatened in the current government consultation document Managing Protest - see www.repeal-socpa.info/ for information and access to the document itself).

Her permission has been denied. She has had not a written response but has been given an idea that maybe she is viewed as some kind of security threat. She believes that this verbal refusal refers to her attempts to make a citizens arrest of Tony Blair during his last weeks of office (see www.peacestrike.org.uk/)

What is interesting here is that Maria has been going into Downing Street every day with a petition for Gordon Brown. Indeed on Wednesday 9th January (the day before the refusal) Maria was accompanied into Downing Street by one peer of the realm and four MPs from all sides of the House (see indy report by rikki

What overnight change has occurred to the security arrangements for Downing Street that the Commissioner Sir Iain Blair deems it necessary to refuse 'permission to demonstrate' to a woman who has had access to Downing St on a regular basis and only the day before was there with 5 parliamentarians.

Was th refusal made because she was there with 5 parliamentarians? (rather than in spite of it)

Or is this another example of the totally arbitrary application of this ridiculous shameful law.
Maria welcomes your support outside Downing Street Monday 14th to Thursday 17th January from 10am – 2pm and on also on Wednesday 5pm to 7:30 pm. Authorisation has been given to be in the pens outside the gates.