Sea Shepherd is Moving In On the Japanese Whaling Fleet

The Sea Shepherd Conservation Society is about one day away from making contact with the Japanese whaling fleet. "We have our sources in Greenpeace. There are quite a few disgruntled Greenpeacers who are opposed to Greenpeace's policy of non-cooperation. They are being very helpful," said Captain Watson. 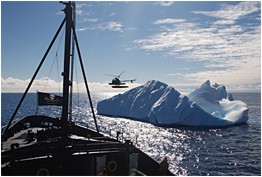 The Sea Shepherd Conservation Society is about one day away from making contact with the Japanese whaling fleet.

"We know where the Greenpeace ship Esperanza is and if Greenpeace is in contact with the Japanese fleet, Sea Shepherd will be there as quickly as we can cover the distance between our two positions," said Captain Paul Watson from onboard the Sea Shepherd ship Steve Irwin.

The Greenpeace ship Esperanza is with the Japanese fleet. Peter Hammarstedt, the 2nd officer of the Steve Irwin called the Esperanza to speak with the Captain but was informed that the Captain was sleeping and was not to be disturbed. Mr. Hammarstedt spoke with Karli Thomas the Greenpeace expedition leader and congratulated her on finding the Japanese fleet and said that since Sea Shepherd gave Greenpeace the coordinates last year would they repay the favor and provide Sea Shepherd with the coordinates this year? Ms. Thomas replied that as expedition leader she did not have the authority to release that information nor did the Captain of the Esperanza. She added that Greenpeace was withholding the information for security reasons.

"We have our sources in Greenpeace. There are quite a few disgruntled Greenpeacers who are opposed to Greenpeace's policy of non-cooperation. They are being very helpful," said Captain Watson.

The position of the Sea Shepherd Conservation Society is that we will provide information as we get it to the world at large, to other groups and to the government of Australia.

"The least we can do in the Cooperation Sea, is to do our best to cooperate with everyone," said Captain Watson. "After all, this is about saving whales from illegal whaling activities. We encourage Greenpeace to be aggressive and wish them well with their opening act in this high seas drama. Sea Shepherd is preparing for the Grand finale."

Just heard on radio Maru factory ship is on move followed by Greenpeace, they must be worried that justice in the form of Neptune's navy is on the way!
HaHa, eat your heart out Francis Drake, Sea sheperd are coming
ps well done Greenpeace to finding them, especially those who are relaying the position to Shep despite official orders

They should. They really should. Forget the past!!!
Together they are stronger. As they are both for real.

Sea Shepherd Joins the Chase for the Whalers

Sea Shepherd Joins the Chase for the Whalers:

The Japanese whaling fleet is on the run and the Sea Shepherd ship Steve Irwin is pursuing.

"We have reached the place where the Nisshin Maru was only hours ago. We are on their trail and will continue to pursue as they continue to run," said Captain Paul Watson.

Two years ago we chased the whalers for 3,000 kilmetres along this remote Antarctic coast," said Captain Watson. "We will continue to pursue them for as long as it takes. The whalers have a choice. They can stop and continue to kill whales and we will catch them or they can continue running without killing whales. Both options will work for us. As Sherlock Holmes would have said to Dr. John Watson, the 'game is afoot' and the chase is on."

The Sea Shepherd Conservation Society is glad to see that the Greenpeace ship Esperanza has the whaling fleet in sight.

"I'm counting on Greenpeace to slow the poachers down until we can catch up. I'm hoping they can block some harpoons and harass them enough until we can arrive to shut the criminals down."

The Greenpeace ship is still under strict orders to not cooperate with Sea Shepherd but Captain Paul Watson is a founding father of Greenpeace and he has his sources.

"We know where they are," said Captain Watson. "So there really is no need for them to withhold their position from the media and the public."

The Sea Shepherd Conservation Society regards the Japanese whaling operation as a poaching operation. The Japanese are targeting endangered whales in a Whale Sanctuary in blatant violation of a global moratorium on whaling. They are as much criminals as elephant or Mountain gorilla poachers. We condemn Africans who kill wild animals for bushmeat yet governments are tolerating the biggest bushmeat butchers of them all and it is happening in Australian Antarctic Territorial waters. The Japanese whalers are a disgrace to civilized society and the government of Japan should be ashamed of their subsidies and support for these bloody minded Cetacean serial killers.

Mainstream news video on the chase: