Freedom to Protest in Milton Keynes

On 12 January 2008, as a part of the national day of action in response to the latest Government consultation titled 'Managing Protest around Parliament', a number of local protesters in Milton Keynes engaged in some leafleting. 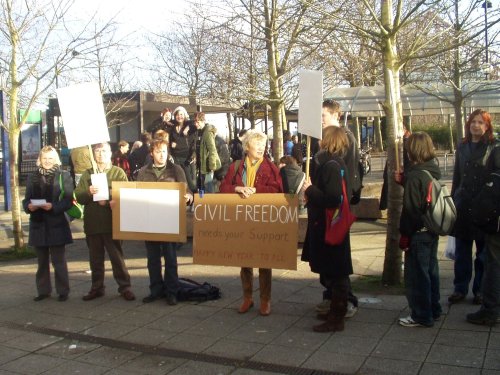 On 12 January 2008, as a part of the national day of action in response to the latest Government consultation titled 'Managing Protest around Parliament', a number of local protesters in Milton Keynes engaged in some leafleting to spread awareness of some of the proposals from the Government which could affect civil liberty to take part in static assemblies.

The leaflet handed out referred to the plans for 'harmonising' the rules governing processions and static demonstrations. It pointed out that the various groups that currently use some of the limited amount of public space available could find their activities affected, and could have extra work in working with Police to gain authorisation for events or be unable to organise events at short notice. It also mentioned that the police could impose restrictions on the place, the duration or the number of participants. It would also affect the actions of any individuals travelling to other places to take part in demonstrations elsewhere.

There was a small demonstration with leaflets handed out to passers by. Several people participated. Passers-by showed interest after seeing some of the signs. The signs including some blank signs which were used to symbolise what could happen if our freedoms are curtailed. One sign said 'Civil Freedom needs your support', whilst another said 'Protest Without! Permission'.

During the period of the demonstration the participants were questioned twice - first by two of the 'security' staff from the adjacent shopping centre thecentre:mk (see note 1 & note 2). Then a short while later two police on horseback (referred to as 'the cavalry' by one of the demonstrators) arrived to question demonstrators to ask what they were doing. After a while the demonstrators were allowed to continue the protest without further interference.

The 'security' staff from thecentre:mk were keen to point out to us that the young people standing around nearby were most certainly not supporting our cause. However whilst some of them may not have seen the point of our blank banners (or protesting at all), a few of them had shown an interest in what we were doing by asking what the protest was about and a few even helped by holding some of the placards!


Note 1. thecentre:mk on it's own website the joint owners of the centre are listed as Hermes Real Estate and Prudential. Also mentioned on the website is that it is still the longest covered centre in Europe.

http://www.thecentremk.com/
Note 2. The shopping centre was opened by Margaret Thatcher on 25th September 1979.