during the freedom to protest assembly this afternoon, brian haw (who was peacefully filming events in whitehall) was violently attacked by a territorial support group policeman who lashed out at him, smashing his camera into his face and causing a deep cut. police then arrested brian for an unspecified public order offence and further assaulted him in a police van. 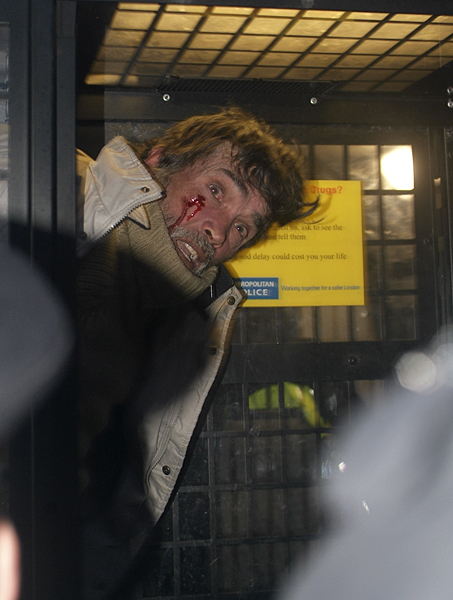 a bloody-faced and frightened brian haw (minus hat)

a number of people were milling around the road outside downing street where a group of around a dozen had laid down with linked arms in the road.

without warnings the territorial support group moved in and began violently pushing and man-handling people to the pavement. one young woman was grabbed round the throat and dragged. others were pushed from behind. brian was miving backwards towards the pavement with a camera to his face when officer U1019 lunged at him deliberately and without provocation. the blow was aimed directly at brian's face and pushed his camera into his cheek causing a deep wound.

shortly afterwards, brian was snatched from the crowd and taken to a police van, from which witnesses heard him screaming. after several minutes he was dragged out of the van looking very alarmed and frightened, and taken to another cell van where he was driven to belgravia police station.

supporters there are worried for his safety, but after an hour of no news, they were told that he was being taken to see the prison doctor. there are concerns about his treatment during that hour.

steve jago, on seeing the snatch, pushed forward to try to help brian, but was immediately pounced on by four heavy tsg thugs who violently dragged him to the ground, sat on him, and aggressively hand-cuffed him before apprently arresting him for an unknown offence.

in an afternoon of filming, at no time did i see a single act of violence towards the police from the peaceful protestors, and yet police used completely disproportionate and aggressive tactics to disperse and control peaceful sit-downs and blockades. i saw a 61 year old woman being dragged wihout any heed for 'health and safety' and dumped on the pavement. another elderly man was thrown over his bicycle (despite having recently had an accident leaving him in considerable pain)

there were several other arrests this afternoon, mainly for obstruction and public order offences. one person was arrested for 'organising an unauthorised protest'

attached photo was taken by nuj journalist terence bunch and remains his copyright although he has kindly allowed publication here - for any commercial usgae please contact him via
www.terencebunch.co.uk

i'll be editing a short film of this afternoon soon

steve jago has been released from belgravia and bailed to return next month. he has a big black eye, very painful jaw and his right embow is swelling up and very painful. no charges have been laid on him yet, but police are considering charges of obstruction, participating in or organising an unlawful demo, and criminal damage.

steve believes there were 7 others held at belgravia who were arrested this afternoon.

brian is still being held, and a forensic medical officer was called to him. supporters are extremely concerned about his treatment at the hands of the police apart from the initial assault by U1019. he has only been charged with a section 5 public order offence, but after seeing the FME he was then in a police interview.

brian is back in parliament square, shaken and bloodied. apart from the time spent inside the police van at whitehall during which witnesses heard his screams and he alleges police held him in torture positions and beat his testicles, he was then subject to further abuse and humiliation at belgravia police station, during which other prisoners heard his screams.

in the end he was only charged with a simple section 4 public order offence and released around 1.30am after being further 'interviewed' by cid:

[[4A Intentional harassment, alarm or distress]

[(1) A person is guilty of an offence if, with intent to cause a person harassment, alarm or distress, he—

(b) displays any writing, sign or other visible representation which is threatening, abusive or insulting,

thereby causing that or another person harassment, alarm or distress.]


given that brian had just been viciously assaulted by an officer, and that the senior officer didn't remove that officer from duty or treat brian seriously, i'd have thought paragraph 3 will be shown to be pertinent:

(b) that his conduct was reasonable.]


brian is in court tomorrow at southern crown court in a challenge to a 'contempt of court' ruling made by judge nicholas evans originally at westminster magistrates' during another trial. the case sets legal precedent as brian had to go to the high court first to win the right to appeal a 'contempt of court' allegation - there was no clear route to do this and the high court had to give judgement first on the process for this to happen. judge evans is on a warning that he may be summonsed to the court to give evidence.

another detainee at belgravia was rob little. he recently walked into marylebone police station with a dossier of evidence of war crimes, and after further meetings with him, chris coverdale (war law expert), and others, there will be a press conference announcement on tuesday that the anti-terror and war crime unit is actually launching an investigation into possible breaches by tony blair and the then attorney-general goldsmith. police pounced on rob at the protest yesterday and arrested him under suspicion of being an organiser of an unauthorised protest. he was also interviewed by cid, held for over twelve hours and let out after 4am, and refused food during this time as they didn't have anything vegan.

there were several others arrested, for minor public order offences and socpa breaches. it sounds as though police were at first reluctant to press any socpa charges, but then had a change of heart and threw them in before rebailing most of the defendants until dates in mid-february.


steve jago seems to have a hole in his elbow and his face is swollen with a black eye.

one thing i forgot to mention earlier is that although brian has only been charged with section four, the belgravia police took it upon themselves to take his camera and film "for evidential purposes". whether this is to see what evidence brian has on officer U1019 (who struck and wounded him), or whether it's to see if it shows evidence of brian's alleged section four breach, i'll leave it up to you to imagine.

an infamous previous occasion when police took brian's stuff was may 23rd 2006, when 78 of them turned up in the middle of the night to seize his placards in parliament square. since then, commissioner blair has been caught lying twice about the cost of that operation. first he said it was £7000, then he admitted it was £28000, and a year later it emerged it was actually £110,000. since that night, the courts have agreed with brian that the operation was an "illegal seizure". but his placards including several 'banksy' artworks worth tens of thousands of pounds, are still rotting in a container at hendon police college.

ps could any kind indymedia folk consider separating this thread out into additions and comments? - it may be helpful for any msm directed to this story. cheers

doug also reported and filmed at

correction - brian wasn't charged with anything!

brian was arrested under s.4 POA for threatening words and/or behaviour, after he was smacked in the face by the TSG thug. he was then manhandled into a van, and further arrested for assaulting a police officer at that point.

he was further arrested, at the beginning of his taped interview, for participating in an unauthorised demonstration.

he denied all 3 offences via written statement, and made no comment to questions asked.

he was released on bail at 3.10am, pending further investigation of these offences. he was NOT charged with any offences.

can Rikki please correct the account given. the information i have provided above is true, i was representing brian during his time in custody.

URGENT! The deadline for self assessment is approaching

For those who not already know. The government have been fielding a public consultation on SOCPA. However the tenor of their literature sounds like they want to extend SOCPA powers for demonstartions rather than repeal them.

Forms can be obtained online and returned either by e-mail or post and must be in by the 17th of Jan:

The Twat in the Bowler Hat