Om Saturday 12 January, Aldermaston Women's Peace Camp(aign) joined others around the country in holding a demonstration claiming the freedom to protest. The Atomic Weapons Establishment is subject to SOCPA and military lands byelaws - both of which intend limiting the right to protest. 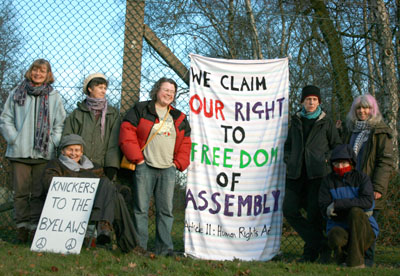 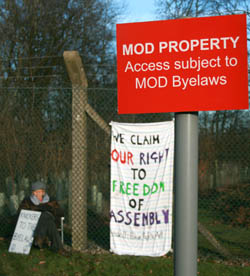 This weekend was the regular monthly women's camp at the Atomic Weapons Establishment Aldermaston in Berkshire. For the past year or so, women from the camp have been battling with the MoD over both SOCPA and new military lands byelaws which aim to limit the right to protest. Since the introduction of these bits of leguislation (as applied to Aldermaston), eleven women have been arrested (see

http://www.aldermaston.net/news for various earlier stories on this).

Speaking at the camp, one of the women said "As 12 January was a national day of action on the freedom to protest, we thought we should show our solidarity and also highlight the MoD's attempts to curtail our freedom of assembly as a camp".

On 1 February women from the camp will hear whether their judicial review of the byleaws will go ahead (previous story at:

The camp has been sustained on a monthly basis since 1985 and is currently working to stop a new generation of nuclear weapons being manufactured at Aldermaston. More women always welcome ;) See website for details.