A peaceful demonstration atains the death of Jamie Pearce in Holloway Prison on 10 Sec, 2007, organised by Pauline Campbell, took place outside the prison on Wed 16 Jam, 2008.
Pictures copyright. 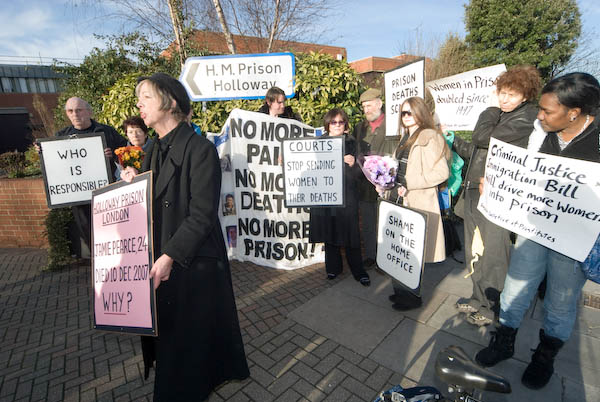 Demonstrators with placards and flowers 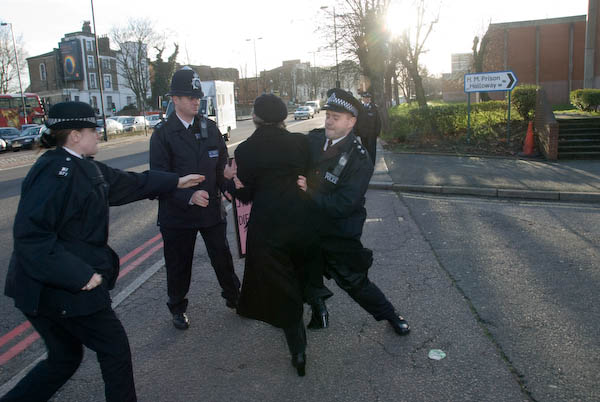 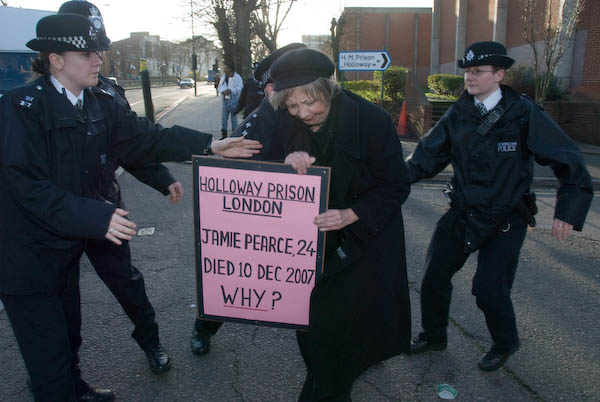 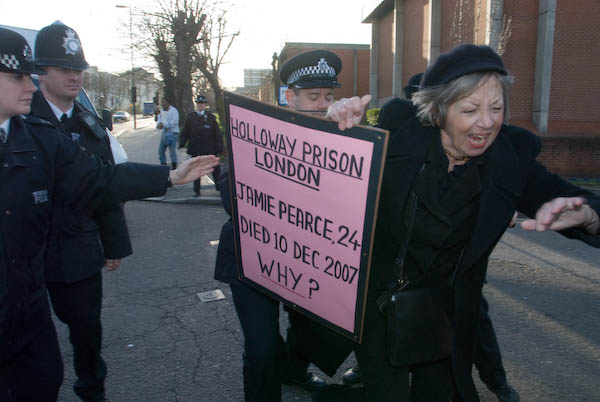 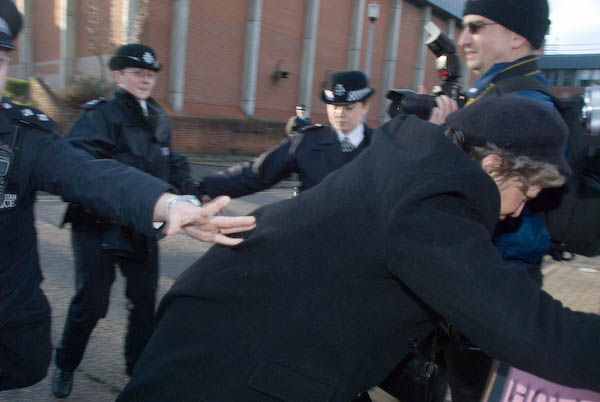 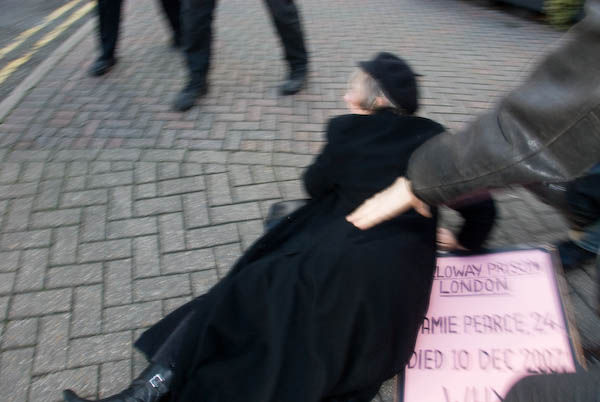 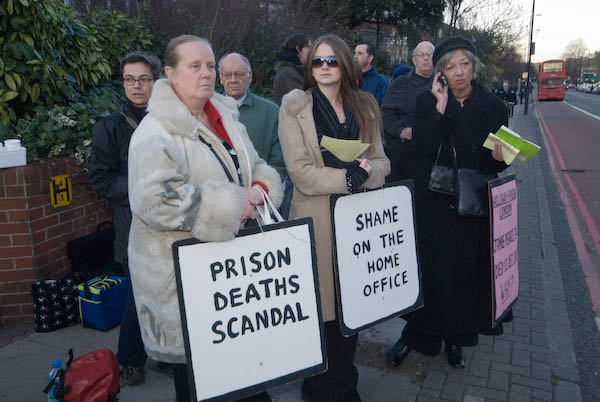 On the side of the road 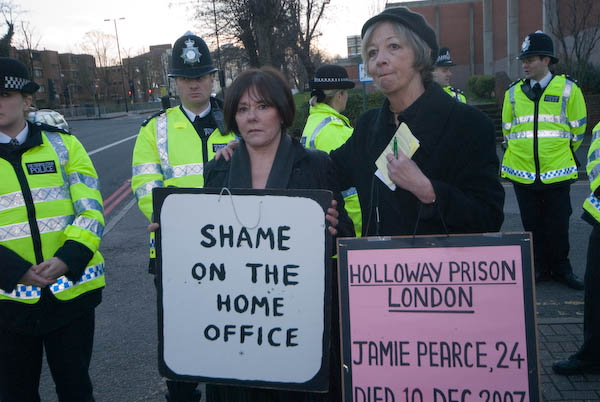 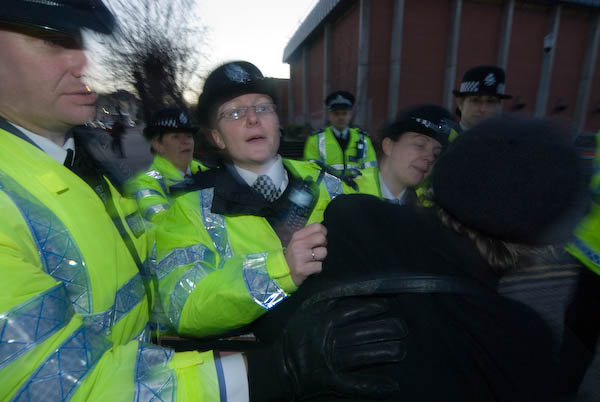 Jamie Pearce died in Holloway Prison on 10 December 2007, aged only 24. She was the eighth woman to die in jail in 2007. Eventually there will be an inquest which may provide information about how and why she died. Prisons have a duty to take care of everyone entrusted to them, and any death represents a failure. Marie Cox, aged 34, also died in Holloway, just a few months earlier on 30 June 2007. "To lose both" in such a short time - to borrow a phrase from Mr Wilde, "looks like carelessness."

A small group of demonstrators gathered at the entrance to Holloway on the afternoon of Wednesday 16 January to display banners and lay flowers in memory of Jamie Pearce, although very little seems to be known about this young woman. Two of those present were mothers whose children had died in jail, the organiser of the protest, Pauline Campbell, and Gwen Calvert, whose son Paul died on remand in Pentonville in 2004. The jury at his inquest gave a damning verdict against the prison, finding "systematic failures, incomplete paperwork, lack of communication, disablement of cell bells, breach of security..."

Sarah Campbell was only 18 when she died in Styal prison in 2003, her death recorded by the prison authorities as "self-inflicted." Two years later the inquest found that her death was caused by antidepressant prescription drug poising and said that there was a "failure in the duty of card" and that "avoidable delays" in summoning an ambulance contributed to her death.

http://mylondondiary.co.uk/2003/10/oct25-06.htm) October 2003. During the afternoon at Holloway she quoted to me the start of something I had written on the site in October 2006, and which I had forgotten:
"One small piece of positive news came from Pauline Campbell, whose daughter Sarah Campbell died in Styal prison in 2003. She said 'After nearly four years of my struggle for justice - in a highly unusual move, the Home Office have finally admitted responsibility for the death of my daughter Sarah Campbell, including liability for breach of sarah's human rights under the European Convention on Human Rights. Don't give up the fight.' It is a fight that has taken Pauline to many protests around the country on behalf of other women who have died in prison and numerous arrests, recognition by the 2005 Emma Humphreys Memorial Prize for her campaigning."
She is also a trustee of the Howard League for Penal Reform. After one of her 14 arrests she was brought to a criminal trial in September 2007 and acquitted when the judge threw the case out of court.

Since Sarah Campbell's death in 2003, forty women prisoners have died. We've suffered for many years under successive governments who have courted tabloid approval for being 'tough' by criminalising and banging up many more women and men with little regard for worsening conditions in prisons. Positive ideas and programmes have largely been sidelined, and the incredible number of prisoners with mental health problems largely brushed under the carpet. It's a system that is failing, one one whose failings actually greatly compounds the problem by increasing reconviction rates.

An inspector and seven police officers lined the roadway leading into Holloway, restricting it to a small area of pavement - and then periodically complained that the pavement was being obstructed. They did allow an adjoining area of pavement normally open to the public but apparently on prison property to be used briefly for photographs, but then made their own job considerably harder by insisting that the demonstrator and press moved back onto the relatively narrow pavement.

At intervals through the long afternoon, SERCO vans came to bring more prisoners to jail. As they did so, Pauline Campbell rushed forward with her double-sided placard demanding 'HOLLOWAY PRISON LONDON JAMIE PEARCE, 24 Died 10 DEC 2007 WHY?' and the line of police stopped her. The first time this happened she was pushed very forcefully by the Inspector, sending her flying to the ground. It looked for a moment as if we were going to see a repeat of the disgraceful treatment given to her at last year's demonstration here (I wasn't present, but I watched the video and saw the photos) but the police appeared to have rethought their approach after this, keeping hold of her and preventing her going through the police line rather than pushing her away.

The atmosphere during the demonstration was quite unlike any other I've been to; it was more like a gathering with Pauline Campbell as an attentive host, talking to people, introducing each of us to many of the others present, and keeping track of everyone's details in her notebook. The police too came in for a great deal of her attention, although some seemed rather resistant to her attempts to educate them.

One of the police voiced resentment being taken away from other duties to police this event. But at least some of the blame for what is happening must fall on police and prison staff who run the business and are in a position to observe its many failings first hand. It's hard to see why prison governors, chief constables, leaders of the various professional associations for prison workers and police aren't far more active in campaigning for reform - and it would be good to see some of them standing beside Pauline Campbell.

More pictures from the event on My London Diary,

I was present at this demonstration abd witnessed the behaviour of the police at first hand. The police sergeant present described the force used against Pauline, to her, as "reasonable" but it wasclearly nothing of the kind - just cheap and nasty bullying which I have seen and experienced myself too often
The numbers of fatalities in custody is a national disgrace; i am actively involved in supporting prisoners an have been for about four years since my own ill treatment, fitting up and abuse by police here in Brighton.. I have been told of staff standing around apathetically when alarm bells go off; persistent racist and other abuse and ill treatment of prisoners going beyond endurance. There seems to be no semblance of shame within the home office or anywhere else in the system. I am well aware of the situation regarding Gwen calvert and several others and the longer it goes on the angrier i and others will inevitably become. One of my prisoners was involved in the Strangeways riots and has commented to me that we are moving toward a situation that will make Strangeways look like a Sunday school picnic, I fear he may well have a point.
There must be an authentically independent body to whom one can complain regarding the police and no such body exists at present - the IPCC is not independent- complaints are too open to tampering and interference by the police who i ahve been tols "stick together like flies round cow shit." More also needs to be done to invetigate miscarriages of "justice" and the governments decision to cut funding is shocking.
A letter in the present edition of FRFI says a bit more about me. Dostievsky, as I've often said, once remarked that you can tell the state of a nation by the way it treats its prisoners well, he is clearly correct, things are not good and until we discover a sense of shame and compassion they never will be. Edmnd Burke said mercy was not distinct from justice but part ot it.
I could say so much more but would end by extending sympathy and condolescence to all who have lost loved ones to the "care" of the state and say to thos eincarcerated by the state keep strong and maintain your personal integrity