Eight protestors held a demonstration at the Dorset House Total petrol station at 170-172 Marylebone Rd, calling on Total to stop funding the brutal military junta in Burma with hundreds of millions of dollars a year. 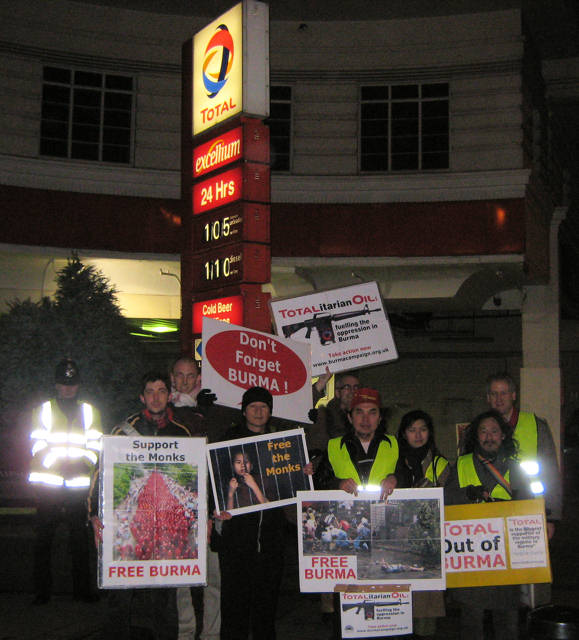 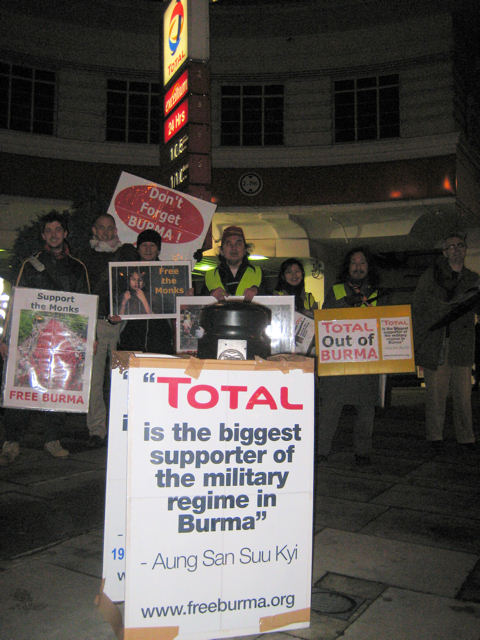 The protestors distributed leaflets and passers-by signed a petition calling on Total to withdraw from Burma. A large banner "Beep to get Total out of Burma" was held for the heavy traffic.

Two policeman accompanied the protest. Despite many peaceful protests at Dorset House, this Total station routinely panics and calls the police wasting their time. One of the policeman very kindly took the first photograph for us !

http://myamarnews.blogspot.com/ for summary of news reports)

The UN Security Council has criticised Myanmar for slow progress on democratic reforms as its special envoy said the government there was trying to delay his next visit until April.

He said: "I had requested to go there this month. They have sent word that it's not convenient and they will prefer mid-April.


A peaceful demonstration was disrupted in Taunggok township.

"The public have been struggling to put up with 'forced' fire guard duties, other 'forced' labour, a 'forced' reduction in rice price for sale to the military, a 'forced' sunflower growing project that no farmer wanted to be involved in, as well as 'forced' cash "donations" to the 'authorities'."

[The Rohingya are a minority Muslim ethnic group in Western Burma, many of whom are effectively denied citizenship and are routinely subjected to extortion; forced labour; arbitrary taxation; land confiscation; forced eviction and house destruction; and financial restrictions on marriage. Hundreds of thousands have fled Burma to become refugees in neighbouring Bangladesh.]

In Buthidaung, Arakan State the security forces, or Nasaka, are taking family group photographs (6" X 4") of Rohingya families and collecting kyat 2,000 to 2,500 from each household. In Taung Bazar village tract to reduce or increase the number of family members on the list the Nasaka demands 3 gallons of kerosene or kyat 5,000 for each person. To increase or decrease the number of cows, buffaloes or goats on the livestock list, families are fined kyat 500 to 1000, said a resident who was recently photographed.

The Geneva based UN aid agency, which terminated its prison visits in late 2005 following interference by a junta-backed organization, said family members of political prisoners have requested them to continue their programme as it would help improve the situation of prisoners.

Thierry Ribaux, ICRC's deputy head of delegation in Burma, said there has been no progress so far in negotiations with the ruling junta on prison visits

The ICRC, which maintained a presence in Burma since 1999, terminated its prison visits in December 2005 when junta-backed civil organization – Union Solidarity and Development Association (USDA) – insisted on accompanying it in its prison visits.

The junta in a further restriction in ICRC work forced a temporary shut-down of its five field offices in October 2006. But the government continues to impose restriction even when it allowed re-opening of the field offices.

In response to the restrictions, the ICRC in March 2007 closed down two of its field offices and reduced its staff.

The Maungdaw district authority is constructing a model village near Du Shara Gon Village between Maungdaw and Ale Than Kyaw motor road. The village is being constructed for new settlers who will be coming from Burma proper.

The authorities have forced many residents of nearby villagers to work at several jobs in the construction, including carrying bamboo, timber, and brick, without payment.

Since October last year, villages in Mong Ngaw Township have been forced to grow sunflower plants and each village was ordered to grow at least 5 to 6 acres. In order to grow the plants, villagers need to buy sowing seeds with their own money. A can of the seeds is K1,200 (about US $ 1) and they need to spend at least K 1 million (US $ 800) per 5 - 6 acres per village.

“Currently, people are using their village funds to buy the seeds. But it is not enough, so each household have to pay another K 40,000 (US $ 32). If the money is not enough, then the village headmen will recollect again,” said Nang Hsa, a villager from Manpint in the township.

Another villager, Sai Zing complained and said,” I don’t know why the junta always wants to oppress us. We always have to do as we are told. When they ask for money, we must pay, even we don’t have money to buy food for us. I had no money to pay. That’s the reason I came to Thailand. I came to ask for help from my relatives here. If I can’t pay, the authorities will double amount of the fine.”

Local authorities have been forcing people to buy motorcycles for their use in Mong Ngaw Township, Kyaukme District, Northern Shan State

[2] The World Health Organization's ranking of the world's health systems:

In other recent news Total was convicted for France's worst oil disaster. The tanker Erika sank, split in two in the Bay of Biscay in 1999. It was carrying 20-thousand tons of toxic heavy fuel oil which polluted 250 miles of French coast, causing major environmental damage. Up to 75,000 birds died in the spill.

The fine was the maximum penalty allowed.

Total and 14 other defendants went on trial in February 2007. All denied responsibility.

Total has plenty of experience denying responsibility in court cases: