During the early hours of January 15th, two crew members of the Sea Shepherd vessel, 'Steve Irwin', were taken hostage by the Japanese harpoon vessel 'Yushin Maru No. 2', which is now nominally owned by the Japanese government through the "Institute for Cetecean Research" (ICR). The incident occurred in the area of 60 Degrees South and 78 Degrees East about 2500 miles southwest of Fremantle, Western Australia and 2800 miles southeast of Cape Town, South Africa. Benjamin Potts and Giles Lane boarded the vessel to deliver a letter to the Japanese captain stating that the whalers were in violation of international conservation law by targeting endangered species in an established whale sanctuary and in violation of a global moratorium on commercial whaling. They also notified the captain that Australia had just passed a court ruling barring Japanese whalers from the Australian Antarctic Economic Exclusion Zone.

The hostages were released from the Yushin Maru No. 2 and transfered to the Australian Customs vessel Oceanic Viking on January 17th. The two men were then transferred to the Sea Shepherd ship Steve Irwin where they resumed chasing the Japanese whaling fleet in the Southern Oceans. Both men reported that although they were roughed up when they first boarded the whaling ship, that they were treated well during their time onboard. The only injury was a bruised wrist suffered by Giles Lane. 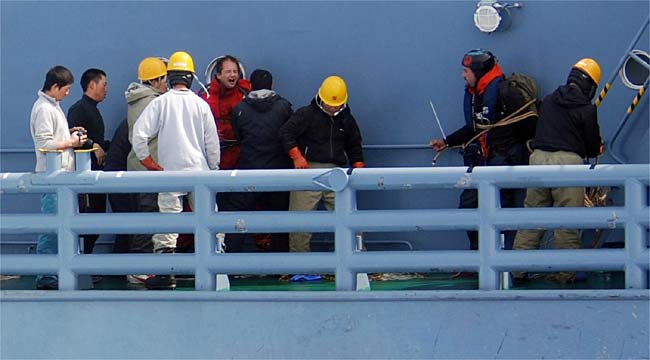 Giles Lane is tied up, while colleague Benjamin Potts is already bound

'Although we appreciate the concern that people have expressed for our welfare, it is important to remember that this is not about us.' said Giles Lane. It's about stopping this cruel and illegal whale hunt. The treatment that we received was trivial in comparison to the suffering that the whales experience at the hands of the Japanese whalers. They may have been rough with us but at least we were not harpooned, electrocuted and mutilated. This is not about us, it's about the whales. Since January 15th, the Sea Shepherd Conservation Society's ship 'Steve Irwin' has been in full pursuit of five vessels of the Japanese whaling fleet, including the Japanese supply vessel 'Oriental Bluebird,' and they say that they will continue to pursue illegal Japanese whaling activities for as long as possible.

The letter taken aboard:

To: The Captain of any Japanese ship involved with poaching operations in The Australian Antarctic Territorial Economic Exclusion Zone.

My name is Giles David Lane

I am a British citizen and an unpaid volunteer on the Sea Shepherd Conservation Society vessel Steve Irwin.

I have come onboard your ship because you have refused to acknowledge communication from our ship pertaining to your illegal activities in the waters of the Australian Antarctic Territorial Economic Exclusion Zone.

I am not boarding your ship with the intent to commit a crime, to rob you or to inflict injury upon your crew and yourself or damage to your ship. My reason for boarding is to deliver the message that you are in violation of international conservation law and in violation of the laws of Australia. It is my intent to deliver this message and then to request that you allow me to disembark from your vessel without harm or seizure.

I am empowered to act to uphold these laws in accordance with the United Nations World Charter for Nature and the laws of Australia.

I am boarding you with the request that you please refrain from any further criminal activity in these waters and cease and desist with the continued killing of endangered whales in this designated Whale Sanctuary in violation of the IWC global moratorium on commercial whaling and that you cease and desist in continued violations of Australian law by killing whales within the territorial waters of Australia without permit or permission from the government of Australia.

I am boarding you on the orders of Captain Paul Watson who requests that you treat me with respect and in accordance with the Geneva Convention.