Twelve protesters held a demonstration at the West Four Total Oil petrol station at 137 Chiswick High Road on January 24th, calling on the company to stop giving the brutal military junta hundreds of millions of dollars a year, as the largest western supporter of the military regime. 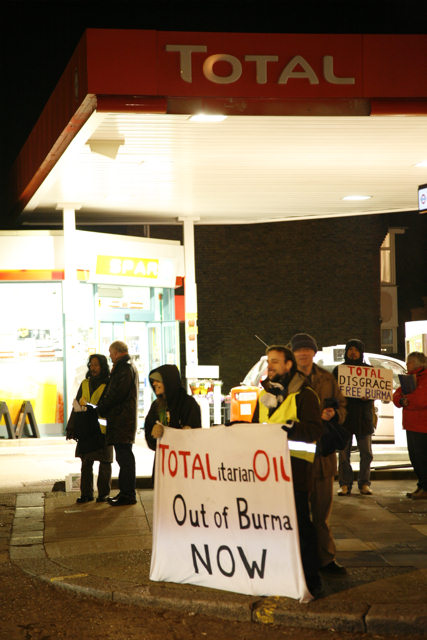 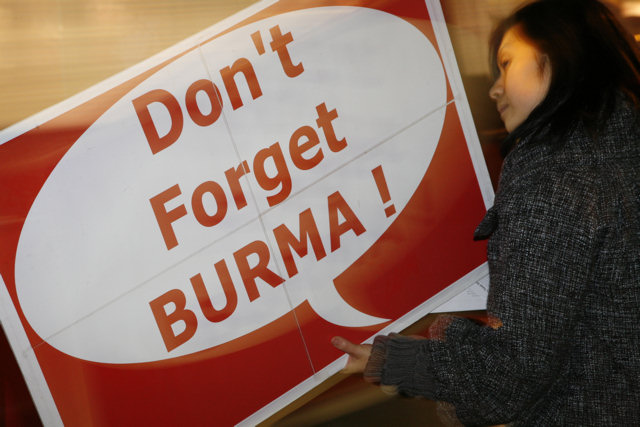 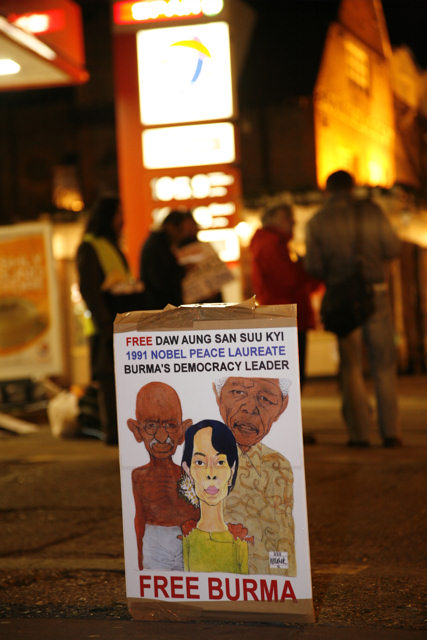 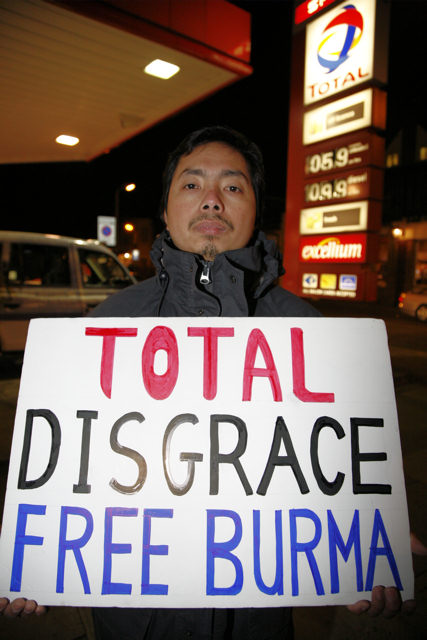 The protesters held a large "Totalitarian Oil Out of Burma Now" banner for passing vehicles, leafleted passers-by and asked them to sign a petition.

Sergeant Soe Myint is well-known for his many previous trips to buy children from poor backgrounds to be taken to Danyin Gone military recruitment center. Recently four children were arrested by security staff for selling discarded broken ice pieces they had picked up from the local fish market. When the parents were unable to pay the K 20,000 to K 30,000 fine for each of the children, Sergeant Soe Myint arrived and paid K15,000 for each of the four children and took them away to Danyin Gone military recruitment centre. The parents living in municipal compounds are intimidated from making complaints for fear of being evicted. Families say at least 20 children have been taken from the same compound as these children.

Nilar Thein and her husband Kyaw Min Yu, known as Jimmy are 88 Generation Student activists.
Nilar Thein spent eight years in jail from 1996 to 2003 for her political activity. Her husband spent 16 years in prison after the 1988 pro-democracy uprising. Nilar Thein is a fugitive from last years protests (number 5 on the junta's list of "terrorists"), unable to visit her 9 month old daughter, which the junta hopes to use as bait to catch her. Her husband is in the notorious Insein Prison and likely to receive a long prison sentence.

Moulvi Alizoher (40), son of Dolo Meah was arrested at the mosque while he was sleeping. He was brought to Baga Mora, an isolated area outside of Monibill, where he was tortured severely. While he was going unconscious and rigorously bleeding, he was handcuffed and then carried to Buthidaung police station by motorbike. The Village Peace and Development Council chairman of Jabbar Para village managed to get the police to release him, but he was pronounced dead from severe bleeding at the hospital he was taken to. According to the post-mortem report of hospital, the victim’s kidneys and liver were completely destroyed.

A close relative said that it is unknown why he was arrested and tortured since he didn't commit any crime.

The police are identified as Corporal Than Aye, Kyaw Zaya and Aung Sein. Sub-inspector Mrat Htwe, was in charge of the operation but did not go to Monibill. The ‘gang of four’ has been harassing the Muslim Rohingya community since killing a woman from Yaung Chaung village of Buthidaung Township in 2006.

"They came and set up their military camps, and then started on their new road plans. Several farmlands in the area, owned by local villagers, were demolished with bulldozers," the villager said, speaking on condition of anonymity.

The villager said that the locals were furious with the military but could do nothing as they had no legal assistance or knowledge about the correct procedures.

"We don't know where to file our complaint and we don't dare to do it. Also, we have to worry about our daily food first of all before we can start dealing with this."

In Pha-pon district, road building by government troops has made villagers relocate deeper into the jungle for fear of a possible new offensive.

Locals said the aim of the new road projects could be to aid mobilisation and provide supply routes for government troops so that they can carry out more offensives against KNU-controlled areas.

[1] Aung San Suu Kyi, Burma’s democracy leader, has said that “Total is the
biggest supporter of the military regime in Burma.” For more information
about Total Oil's investment in Burma see the Burma Campaign UK website:

[3] Burma joins Somalia in 179th place as the most corrupt countries in the
world according to Transparency International 2007 index rankings:

Another demo against TOTAL in Chester on Saturday

All welcome. Please join us.