A colourful banner protest was held outside the office of Greenergy International, the UK’s largest biofuel supplier, on Wednesday, 30th January, between 12.30 and 2.30 pm.
This was part of a National Week of Action on Agrofuels in which different groups and organisations across the UK are organising protests against the deforestation, high food prices, human rights abuses and faster global warming caused by biofuels from large-scale monocultures. Over 40 people were present. 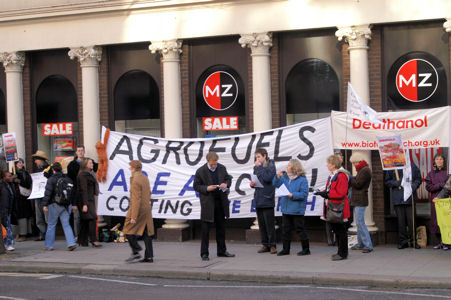 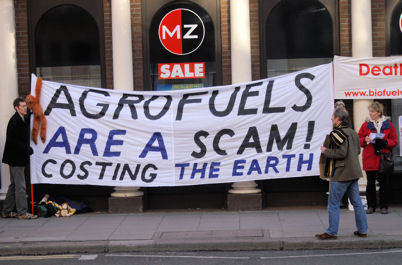 Agrofuels are a scam 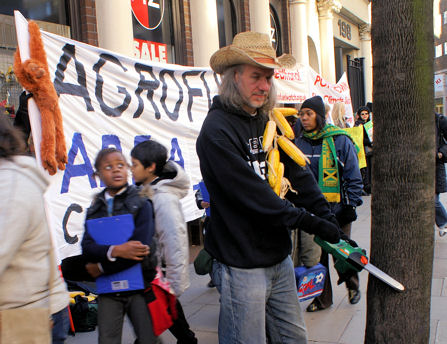 How many more trees will be chainsawed? 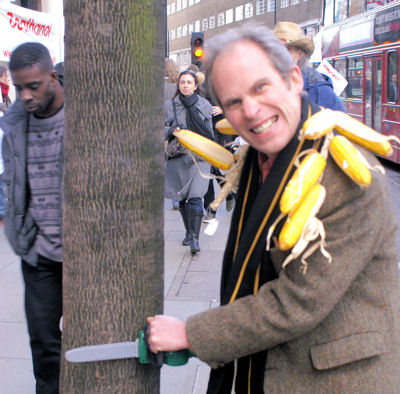 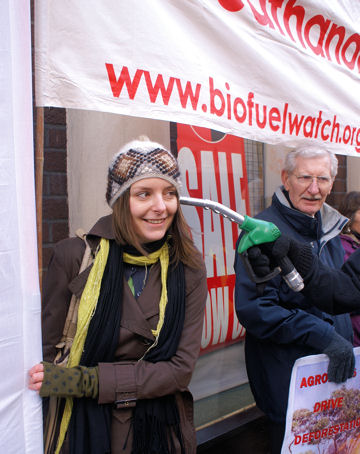 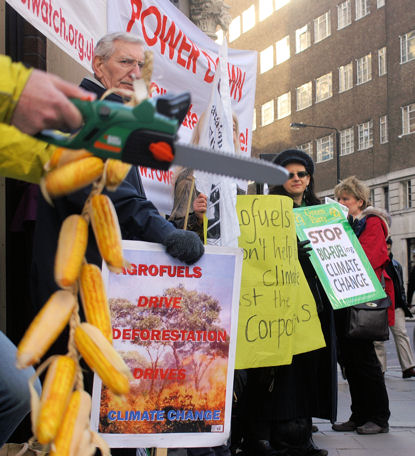 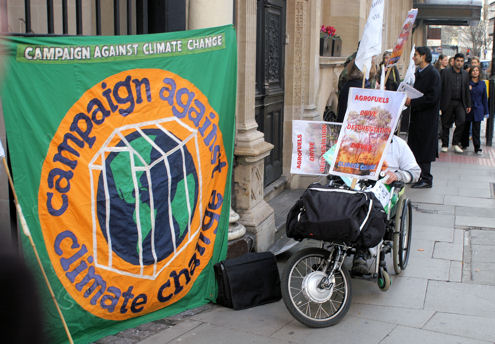 Agrofuels are a climate justice issue 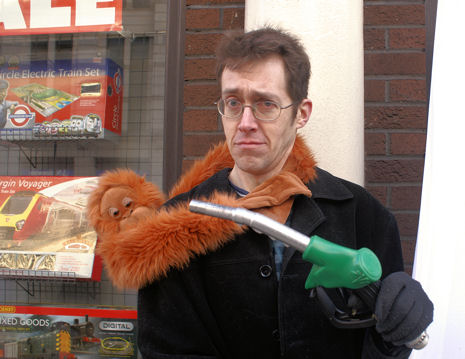 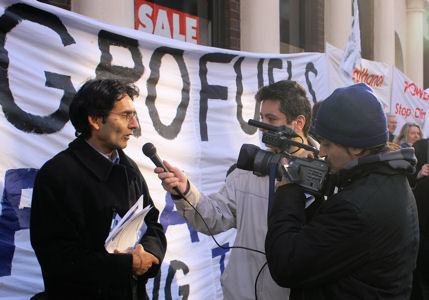 Greenergy International is an oil company with large biofuel interests, in partnership with Tesco and Cargill (see ‘Links to Tesco’, below). They supply ethanol from Brazilian sugar cane as well as refining biodiesel from soya, palm oil and rapeseed oil.

Deepak Rughani of Biofuelwatch, one of the organisers of this protest, says: “Across the global South, tens of millions of hectares are being converted to vast monocultures to grow fuel for our cars. This is a disaster for communities, for forests and for the global climate. “

Over 200 organisations from North and South have called for an EU moratorium on agrofuels from large-scale monocultures, and there have been many similar calls, including from a large number of civil society organisations in Africa, Asia and Latin America. The United Nations Special Rapporteur for the Right of Food has described current biofuel production ‘a crime against humanity’ and demands a 5 year moratorium. The UK Parliament’s Environmental Audit Committee also supports a moratorium on biofuel targets and warns that current ‘sustainability standards’ will not prevent serious negative impacts from biofuels.

In the UK, mandatory blending of petrol and diesel with biofuels will be introduced on 15th April, under the Renewable Transport Fuel Obligation. Almuth Ernsting from Biofuelwatch states: “From April, people will have no choice but to contribute to the destruction of forests, the eviction of small farmers and rising food prices which will mean more hunger. More and more people now realise the need for a strong movement to stop the destruction caused by the biofuel industry and the legislation which encourages it.”

Andrew Boswell, said "Last week a committee of MPs published a report 'Are Biofuels Sustainable?'. Their answer was a resounding ‘No!’. Ruth Kelly, Transport Minister would like this report to quietly disappear. It won’t, and it is now time that Ruth Kelly go to the House of Commons and respond to the report - not hide away and hope the report will be forgotten. Her only credible response is to drop the UK biofuel / biofool targets immediately."