Nine protesters demonstrated at Kilburn Total petrol station on 31st January at 409 Kilburn High Rd, calling on the French oil company to stop being an accomplice to the theft of Burma's resources by the corrupt military junta. The National League for Democracy (NLD), led by Aung San Suu Kyi, won 82 percent of the seats in Burma’s 1990 election but the corrupt regime refused to hand over power. 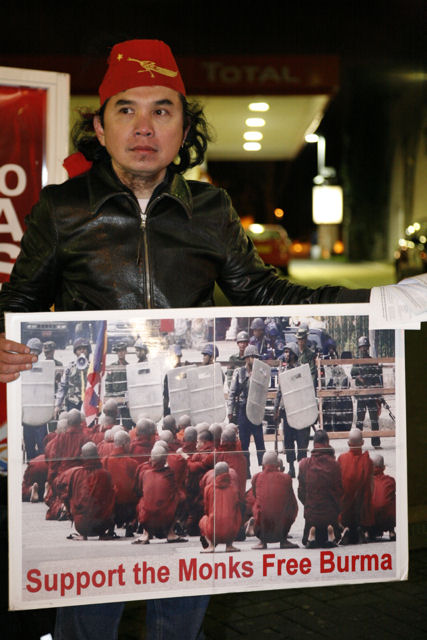 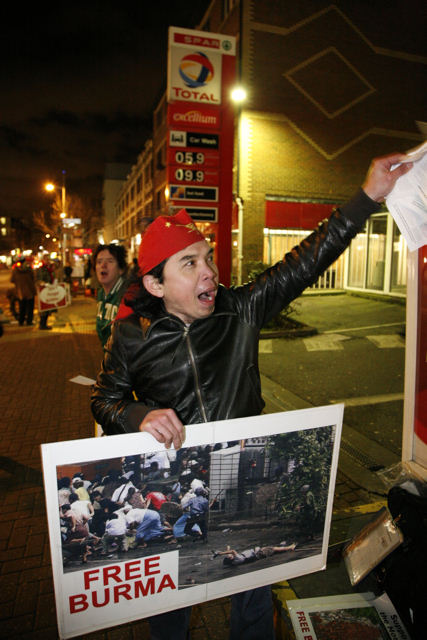 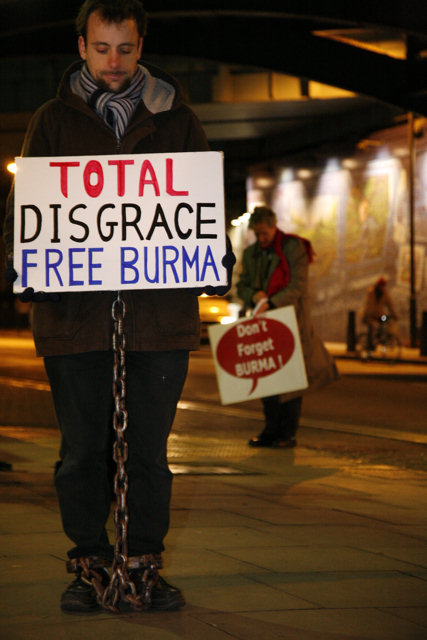 Braving the cold and strong winds, the protesters chanted against Total's funding of the brutal military regime. Hundreds of leaflets were handed out to passers-by.

One bus driver stopped his bus briefly to invite protesters on board to give him a leaflet and was very supportive of the protest. London bus drivers often wave or beep in agreement when they pass the protests. Clearly London has some very well informed bus drivers.

The protesters were interviewed by the Chinland Guardian (See article

We'll be back again in Kilburn next week.

A detailed report on Total Oil's involvement in Burma, written by Burma
Campaign UK, can be downloaded at

National League for Democracy (NLD), spokesman Nyan Win said Suu Kyi had told Aung Kyi, appointed as go-between after the September crackdown, that talks must include representatives of Myanmar’s many ethnic groups, which have been struggling for autonomy or independence for five decades.

Suu Kyi also told her colleagues she feared she was being strung along by the junta, a group of generals who have turned promise-breaking into an art form, not least by ignoring their humiliating 1990 election defeat.

“She is not satisfied with meetings with Aung Kyi and with the lack of any time frame,” Nyan Win said.

In another sign of junta intransigence, NLD number two Tin Oo, who like Suu Kyi has been under house arrest since May 2003, was barred from attending the meeting, held at a government guest house under heavy armed guard.

Members of the Burma Campaign UK have just returned from a trip to Karen state in Eastern Burma where eye-witnesses described increasing numbers of child soldiers being sent to the frontline to take part in attacks on ethnic Karen civilians. The regime’s battalions in Karen state are under strength, reportedly due to increasing difficulties recruiting, high numbers of desertions, and heavy losses fighting the Karen National Liberation Army (KNLA), the armed wing of the Karen National Union.

“The commitments on human rights that this regime has given the UN have as much credibility as Hitler’s signature on the Munich agreement,” said Mark Farmaner, Director of the Burma Campaign UK. “For almost 20 years the dictatorship has lied to the UN over and over again, and the UN has let them get away with it.”

Last year the regime gave the UN a commitment to take action on child soldiers. At the same time reports from Human Rights Watch and organisations in Burma indicated that the regime was stepping up recruitment of child soldiers. The regime has also recently broken commitments to the UN on forced labour, and on the arrests of activists who took part in the September 2007 uprising. UNESCO has described Burma as the child soldier capital of the world.

On 12th of this month, about 30 soldiers from Company 2, LIB 360 led by Second Lieutenant Maung Myint came to Loi Kao Kot (Nine Bend Mountain), between Tong Tar and Mong Pieng, to destroy poppy fields. "It is just another of their (the junta) public relation stunts. They do that just to take pictures and show their leaders or to the world," the source said.

On the way back from Loi Kao Kot to Mong Liang village, they met Nang Kham Ai (not her real name) coming back to her house from herding the family's horses. She was threatened with gun and dragged into the farm, half a mile from the village and was raped by Second Lieutenant Maung Myint and 3 of his followers from 4:30 pm till late evening.

Uthidaung, Arakan State: Another teenaged Rohingya girl hailing from Phone Nyo Hlake village in Buthidaung south was raped and robbed Kyat 170,000 by policemen of Buthidaung Town on the second week of January.

On January 11, at around 3 am, six policemen led by Sub-corporal Hla Aung and Kyaw Zaya, Aung Sein of Buthidaung town police station went to Phone Nyo Hlake village while the villagers were sleeping, said a close relative of the victim.

Three policemen entered the house after calling the owner Abdu Karim while three others waited outside. Entering the house, the policemen saw a young girl Shamsunar Begum (not her real name). Two of them tried to rape her while the third broke the lock of a box and took Kyat 170,000. The family members cried for help and villagers rushed to the spot. But seeing the policemen, the villagers left. The girl was raped in the presence of her family members.

On January 3, a section of policemen led by Sub-corporal Hla Aung of Buthidaung Town raped another teenaged girl in Phone Nyo Hlake village.

A Nasaka commander Captain Aung Tun Myint of Nasaka area No.7 has become a millionaire after collecting money from villagers illegally , said a close aide of the Burma ’s border security forces.

The captain accompanied by other Nasaka personnel went to villages, surrounded it at midnight and searched house. They searched for illegal marriages, guest lists, family members, who had gone out of the out the house temporarily, checked the livestock list, mobile phones and property list. If they found any mistakes, they arrested the villagers and brought them to their camp and detained them. They released the persons who paid money and sent to jail those who were unable to pay, said one of the villagers who requested anonymity.

About 200 children were born in Nasaka area No. 7 from parents who didn't have marriage permits from the authorities. The commander also collected Kyat 50,000 to 200,000 from such couples. Some couples unable to pay were sent to jail for six years.

In an amazing display of solidarity and unity the people of Taunggok defy the authorities in well organised poster and petition campaigns, despite an overwhelming presence of security forces.

In January 7,000 people signed a petition calling for the release of National League for Democracy members (

Extensive use of force, compulsive labour and rampant abuse of human rights in military ruled Burma since 1988, have forced many ethnic Chins to flee to neighbouring countries in search of their livelihood.

Saw Wai was arrested after a poem he wrote with a hidden message that read “megalomaniac Than Shwe” was published in a weekly journal.

His wife, Ma Nan San San Aye, said that she received a telephone call from an official at Insein prison at around 4pm on 29 January telling her she could not visit Saw Wai.

“The official said he had been banned from receiving family visits, but that the family could still send him things.”

But when Ma Nan San San Aye went to the prison the next day to give him some items, officials showed her an order letter which said Saw Wai would not be allowed to receive family visits or packages after 29 January.

“I just wanted to give him some blankets and mosquito nets,” Ma Nan San San Aye said.

Trafficking in women increasing every year in Kachin state: KWAT

Lives of women have been severely affected in Kachin state because of the overall deterioration of the economic situation in Burma. Things have come to such a pass that women from the state are being sold to neighbouring countries like China, a Kachin women's group said. It added that trafficking in women is increasing by the year.

Kachin Women's Association (KWAT) is now ready to produce a series albums called "Amyu shayi ni shawng lam de" which means women towards the future. It will be released within this week.

"The idea behind producing the album is to unite the women in society and encourage trafficked women. It is meant to reduce trafficking in the community," said Ms. Gum Hkawng. "It is also the most effective way to create awareness about trafficking in society through music," she added.

Message To All From 1988 Student Leaders

The Military government has charged ten leaders of the 1988 Generation Students, the detainees in Insein prison, with unlawful printing and distributing, then remanded them, Ko Soe Tun, their colleague reported.

Many of the 88 Generation Students are serving long-term prison sentences. They still nevertheless strongly believe that the country's long-running political, social and economic issues can be resolved by National Reconciliation.

[1] Aung San Suu Kyi, Burma’s democracy leader, has said that “Total is the
biggest supporter of the military regime in Burma.” For more information
about Total Oil's investment in Burma see the Burma Campaign UK website:

[3] Burma joins Somalia in 179th place as the most corrupt countries in the
world according to Transparency International 2007 index rankings: