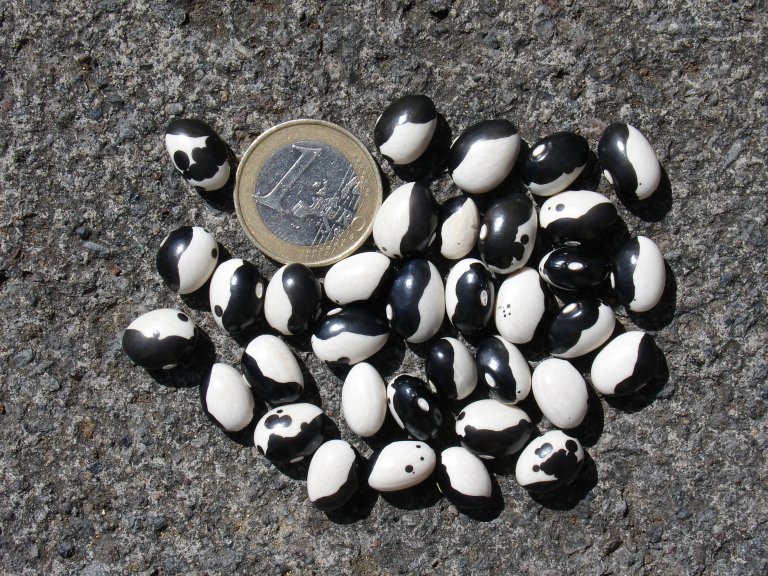 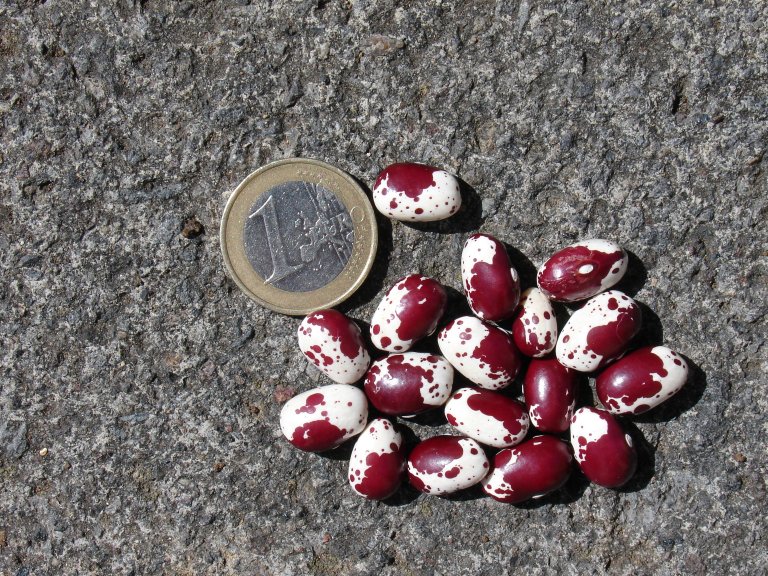 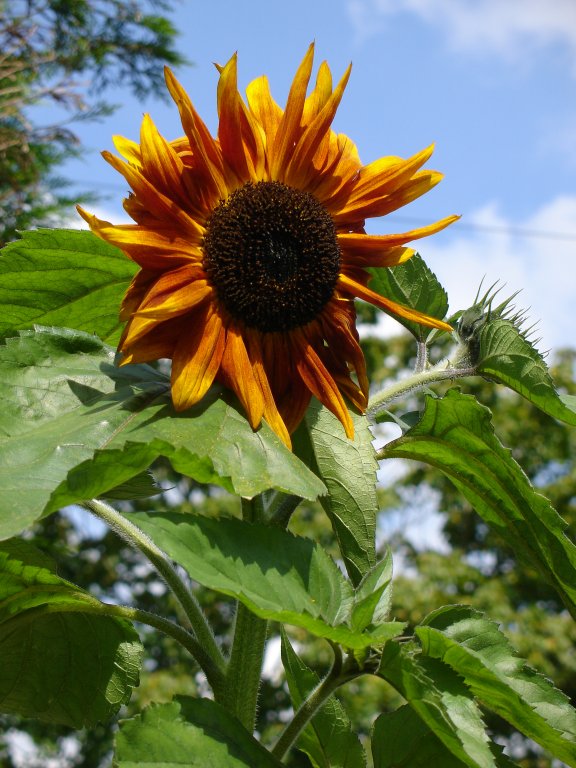 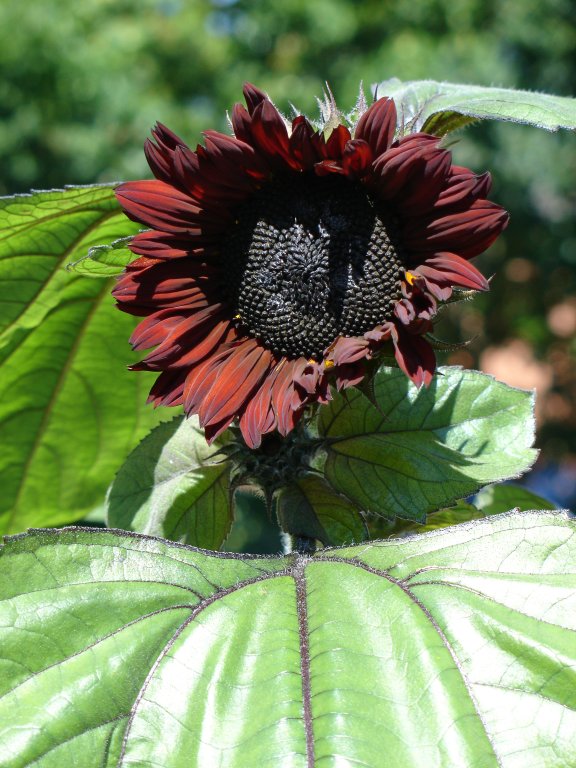 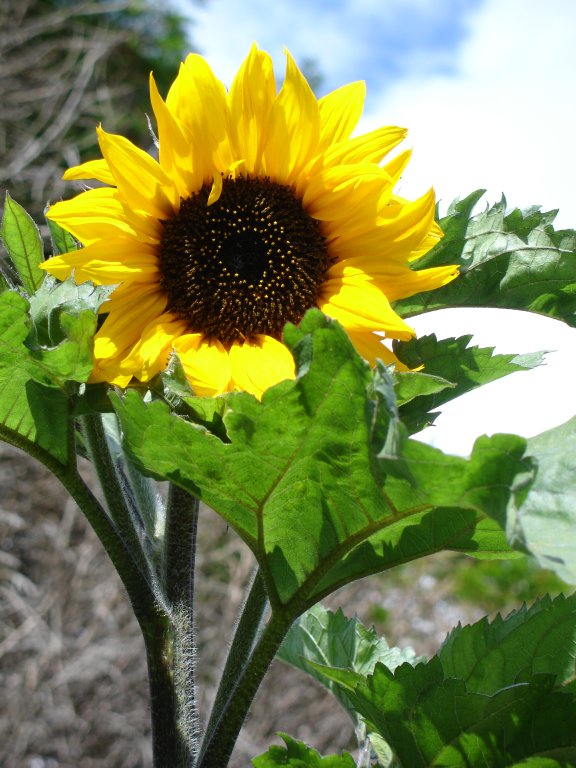 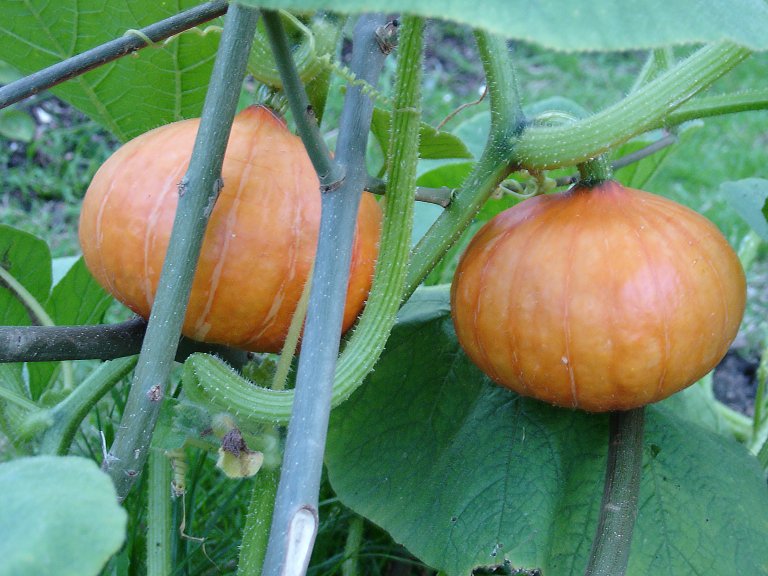 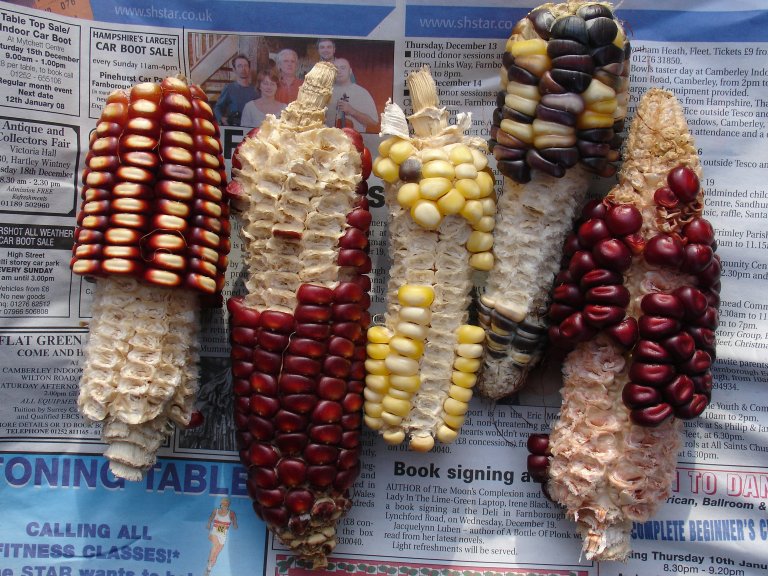 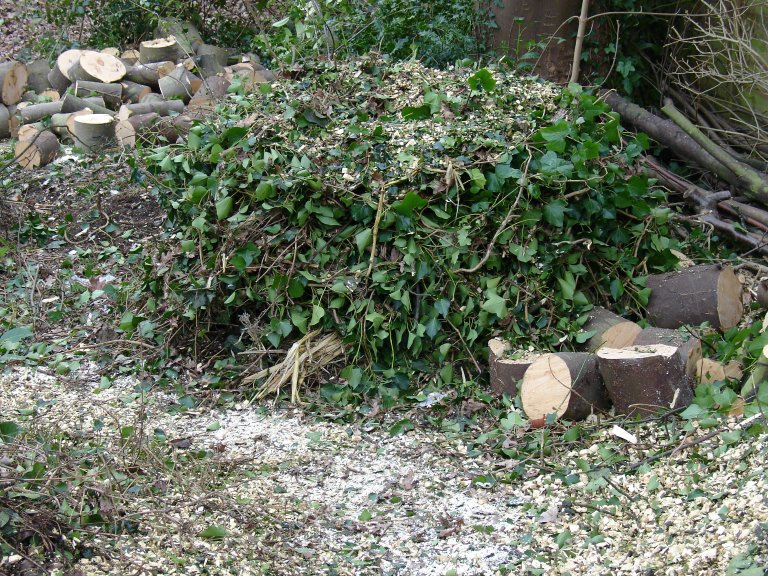 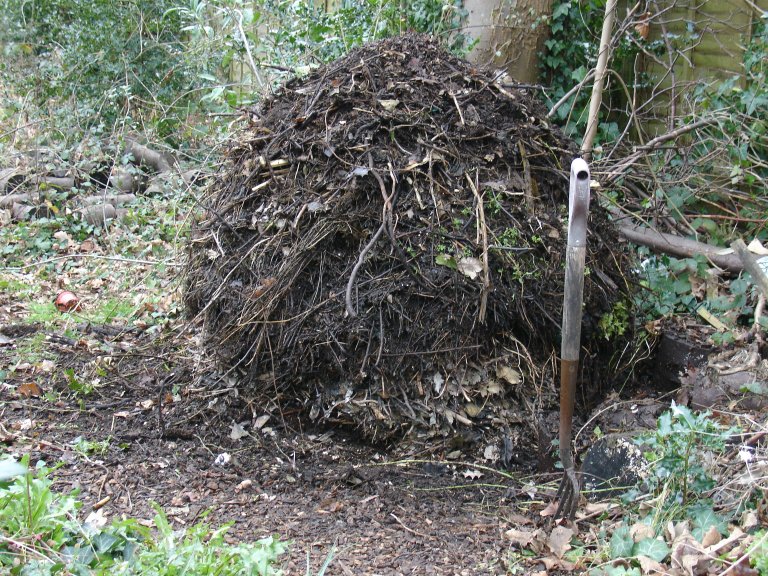 "The time has come to reclaim the stolen harvest." -- Vandana Shiva

Seedy Sunday Brighton is an annual event held early in the year, a seed swap, the place to get rare and unusual seeds just in time for the growing season.

Due to renovation work at the Old Market in Hove, this year saw a change of venue to Hove Town Hall.

A little further to walk along the sea front from Brighton. A pleasant walk if it is a nice sunny day, not so good if it is wet and windy and pissing down with rain.

I took down with me a variety of sunflower seeds, including rare red sunflowers, grown in my garden last year, and unusual sweetcorn varieties from a friend's farm in Tenerife, which I also successfully grew last year.

The red sunflowers varied from deep blood-red, almost black when they opened, to yellow tinged with red, which look like a flaming sunrise. The sunflowers I made no attempt to segregate when they were growing (they need to be a kilometre or more apart to breed true) and I also neglected to label the plants as they were growing, so a mixed bag. But you can get back to the original varieties, or maybe improve upon, by careful seed selection when they are grown.

With the seeds I took, I was able to make some excellent seed swaps.

Journey down by train was the usual nightmare. Rail works forcing a bus trip from Three Bridges to Brighton. Time wise it was not too bad, less than ten minutes to wait at Gatwick for a train to Three Bridges, then a bus left direct Brighton that left almost immediately on arrival, but a double decker bus rattling down a motorway (and rattle is the operative word as you feel every bump and pothole, is no joke). Arrival at Brighton was almost the same as by train. The journey back almost as bad, but not too long to wait at Three Bridges (and the train was waiting), nor too long to wait at Gatwick. Welcome to the Third World transport network. [see Weekend public transport]

With a bitterly cold wind blowing, wind chill making it sub zero, I diverted into North Laines (Bohemian part of Brighton) to get out of the wind and made the most of the opportunity to drop into a couple of bookshops, and to my pleasure picked up My Name is Red by Orhan Pamuk and The Pilgrimage by Paulo Coelho. At the station flea market I managed to pick up a copy of The Valkyries by Paulo Coelho.

I would highly recommend all three books as excellent.

On the seafront I stopped and had cockles, followed by a crab sandwich, eating of which my fingers turned blue with the cold.

A long cold trek along the seafront, occasionally a little hazy sunshine. Once Hove is reached a wide esplanade which is extremely boring to walk along. The little bathing huts (in reality little more than large garishly painted garden sheds), look great on postcards, but in realty very tacky.

Finally there, but once inside, I have to say, what a disappointment compared with previous Seedy Sundays.

Hove Town hall lacks the atmosphere of the Old Market.

In previous years, apart from the Seedy Sunday stalls, there has been many other stalls if not groaning loaded with seeds, this year there wasn't.

We also need some more radical stalls: Rising Tide, SchNEWS, The Land is Ours.

Not though an entirely wasted journey.

Most of the seeds I acquired were from the commercial seed merchants. I also this year picked up some first early seed potatoes.

There has to be a serious rethink of the direction in which Seedy Sunday is heading, otherwise it will degenerate into just another Green Fayre, and been to one, you have been to them all.

There has to be a lot more tables and organisations with seeds to swap. There also has to be better quality control and seed labelling.

To find packets labelled 'runner beans' or 'climbing French beans', defeats the whole rationale for the very existence of Seedy Sunday, which is to safeguard and propagate rare and endangered traditional varieties.

The provenance of the seeds is important. Maybe Joe has been growing his beans on his allotment for thirty years, his grandmother before him, he saves his seeds every year and has no idea what they were other than a neighbour gave them to his grandfather.

Use a little imagination. Joe's beans, or the name of the farm or locality. Something so we all know what we are taking about. A brief description of where they came from, of the seeds, its shape and form, the flowers etc.

In addition to a good size seed swap, there also needs to be a good range of commercial seed merchants.

No gripes on that score and I would in particular commend Thomas Etty and Pennard Plants.

It is a pity though that Real Seeds have not had a stall these last two years.

Some my question why, surely a seed swap is not a commercial event?

True, but these are small companies who are doing sterling work keeping the traditional varieties alive. They need our support. If people did not buy seeds from them they would not exist, and we would be the worse off for lack of choice.

I do not know who did the soup (leek and potato), but it was excellent. Please someone post the recipe in the comments.

Last year and the year before, there was fresh vegetables for sale. Not this year.

We did though have a cookery demonstration, which is a welcome extra.

I hope next year Seedy Sunday is back at the Old Market Hall.

Apart from being a better venue, it is also more convenient for those who arrive by train at Brighton Station.

I have enjoyed previous years and was looking forward to this year, but I have to admit the sense of enjoyment was not there as before.

I nevertheless picked up a good selection of seeds, mainly, but not exclusively so, from the commercial growers.

Cos lettuce: Lobjoits Green Cos.

I can only hope this year's growing season is better than last, which was an unmitigated disaster, nearly everything got eaten by slugs and the tomatoes which were doing so well succumbed to blight.

Last year, with the warm, wet summer, was something of a growing disaster. Peas (Kelvendon Wonder) and broad beans (Bunyard's Exhibition) sowed late February and a further sowing of peas (Lincoln) in March did very well and we enjoyed eating the produce in June, as did tomatoes, sweetcorn (maize) and sunflowers, but for everything else it was a disaster. Several successional sowings of French beans, runner beans, courgettes, pumpkins, were all devoured by slugs and snails.

I did try watering in nematodes some time late summer, which unfortunately coincided with a dry spell, but it made no difference, as soon as it turned wet again, out came the slugs and snails, happily munching away. Every night I would go out, killing the slugs, collecting the snails and depositing on the compost heap, but it made no difference, everything was still eaten. Very disheartening.

This year, during a warm spell in January, I planted out early peas (Early Onward) and broad beans (Muchamiel), in February in will go some more peas (Kelvendon Wonder).

I will also put in some more broad beans, these will have to be remote from the January sowing, else will not have varietal purity, possible Bunyard's Exhibition, or maybe The Sutton or Bonny Lad. I have yet to decide.

May, I will sow runner beans (Scarlet Emperor) and start off French beans, courgettes, pumpkins, young tomato plants can be planted out.

The nice thing about peas and beans and sweetcorn and tomatoes and pumpkins and courgettes, is that apart from problems with slugs and snails, they are very easy to grow and the seeds are very easy to collect.

When saving seeds, do not forget to save extra for seed swaps or giving to friends.

It may not seem much, but by growing our own vegetables, by sowing the unusual and traditional varieties that we find at Seedy Sunday and other seed swaps that are springing up across the country, we are countering the control Big Business has literally over the seeds of life, helping to safeguard rare and endangered varieties, enjoying fresh produce from our gardens and allotments, not spending money in the big supermarkets who are driving small retailers out of business.

Walking back to the station I walked along the main road running past the Town Hall into the centre. En route, an amazing shop called Taj, an Indian variant on Infinity Foods.

Shopping in Tesco or any of the major supermarkets is an unpleasant experience, one cannot get out quick enough. Not so in either Infinity Foods or Taj. Ones senses are assaulted by seductive aromas, a riot of colours.

Apart from swapping seeds, I also dropped off a couple of BookCrossing books with a food or environmental theme.

I hope who ever found them, enjoys!

The day's event was sponsored by Infinity Foods, who have a very good whole food shop in Brighton.

Keith Parkins, Why do we feed our kids junk food?, Indymedia UK, 12 February 2007