The World Bank are at it again. Not content with enforced privatization of utilities in poor countries, they have now been found to be funding loggers and cattle ranchers in the Amazon! 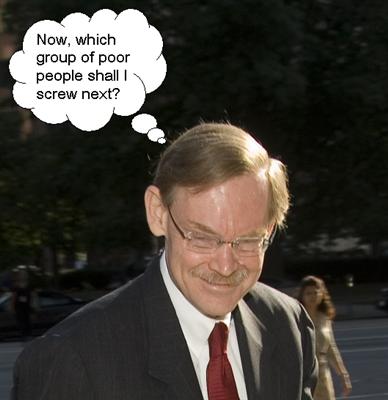 Nice guy Robert Zoellick. Hand-picked by George Bush in 2007 to ensure the interests of the USA remain paramount in the policies of one of the world’s largest money lenders, his replacement of the shamed Paul Wolfowitz was really a like-for-like swap, so it’s no surprise that the World Bank is in the news again as arch hypocrites.

Founded in 1944 to fund the reconstruction of post-war Europe, the World Bank, or International Bank for Reconstruction and Development shifted its focus in the 1950s to funding “development” projects in poor countries. The underlying aim is now, in fact, to ensure that any financial, infrastructure or political systems operating in these countries become market-led, thus allowing corporations and Western government interests (essentially the same thing) to control the resources and public purses of poorer countries. The lending agreements are corrupting, to say the least.

Here is an excerpt from the a conditions of lending agreement with Armenia:

That was from 1997. Just in case you think things have changed, this is from a lending agreement with Serbia:

“In order to increase collections from industrial consumers, political will is required, particularly where enforcement of payments discipline requires disconnection. Evidence from elsewhere in the region suggests that payments problems of this nature are best tackled through restructuring and privatization of large industry.”

So it is no surprise that they are in the news again, this time having been found to be a major lender to projects that are causing massive deforestation in the Amazon Rainforest. The Independent newspaper reported at length on this appalling hypocrisy, running counter to many of its now public aims:

“In a single project last year, the IFC – part of the World Bank group – handed $9m to Brazil’s leading beef processor to upgrade its slaughterhouse operations in the Amazon, despite an environmental study, carried out for the IFC, which showed that expansion of a single slaughterhouse in Maraba would lead to the loss of up to 300,000 hectares of forest to make way for more cattle.”

They lie, they manipulate, they are the World Bank.