Kilburn Get Total Out of Burma protest 7th February

Eight protesters targeted Kilburn Total petrol station on 7th February at 409 Kilburn High Rd to demonstrate against the French Oil and Gas company. Total funds the brutal regime with hundreds of millions of dollars a year. Total's gas pipeline in Burma was built with slave labour from Burmese villages that were bullied and "relocated" by the junta's army for the pipeline (See www.totaldenialfilm.com). 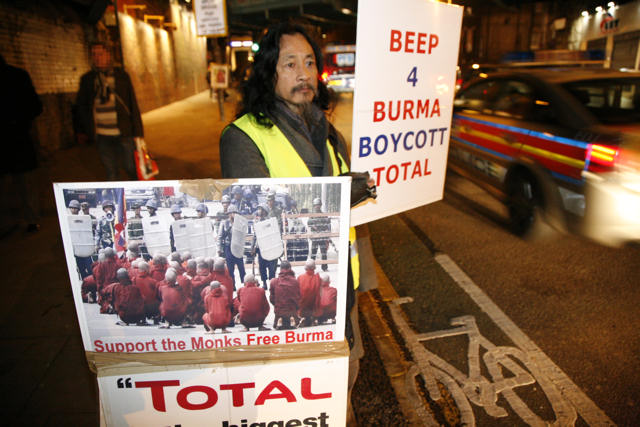 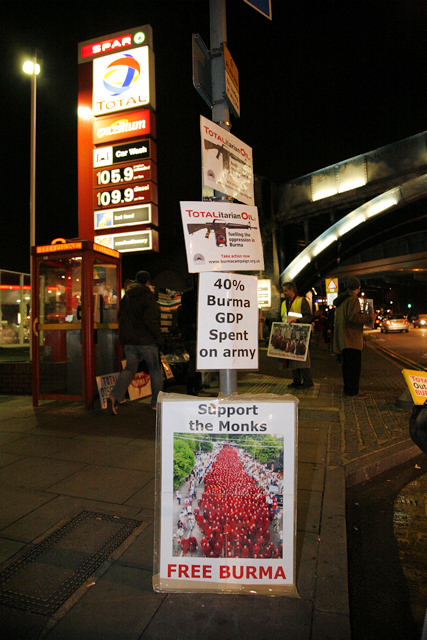 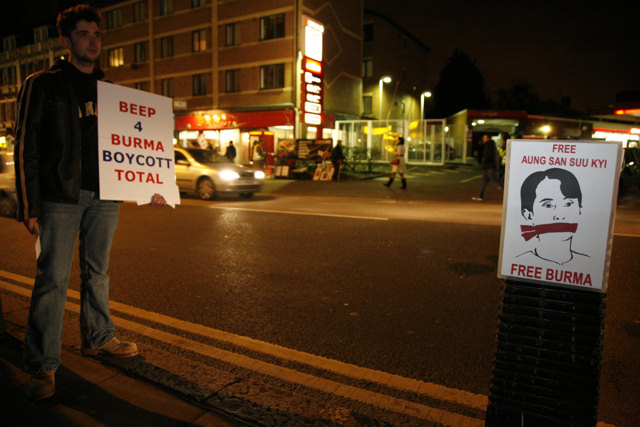 It was the second week in a row the Get Total Out of Burma protest had been held at Kilburn, but passers-by again showed great interest with hundreds of leaflets being handed out for Burma Campaign UK. Several people asked how to get more involved helping with future protests (we took their email address but people can also sign up for campaign updates on the www.totaloutofburma.org site - see below for some interesting events next week).

Total's 4th Quarter results will be out next week on 13th February. We expect Total to again make huge profits at the expense of oppressed Burmese and other oppressed regions Total likes to exploit, not just the motorists !

A detailed report on Total Oil's involvement in Burma, written by Burma Campaign UK, can be downloaded at

Events in London next week:

http://preview.tinyurl.com/383nv7
(Film set in Burma, Burmese and supporters will be calling for a Free Burma rather than specific campaigns. In Burma people are risking jail just to see this film see:

http://www.abitsu.org/?p=1292
Sylvester Stallone writes, directs, produces and stars as RAMBO, filmed on location in and around Chiang Mai, Thailand, with the backdrop of the world's longest-running civil war, the Burmese-Karen conflict.)


Protests are held weekly but locations may change. For information and reports on protests in London and around the country please see

The junta has announced that a referendum will be held on the constitution in May followed by elections in 2010.

The military's roadmap for democracy has been widely dismissed as a sham by observers.

Late last month, Ms Suu Kyi said she was not satisfied by recent talks with military rulers, expressing concern that the meetings might raise false hopes of political reform. She repeated demands that the talks must involve pro-democracy groups and representatives of Burma's ethnic groups.

Burma held a multi-party election in 1990, two years after thousands were killed in a crackdown on popular demonstrations.

But the military ignored the result and Ms Suu Kyi has spent 12 of the last 18 years under house arrest in Burma's commercial capital, Rangoon.

Instead, the military formed a convention in 1993 that spent the next 14 years setting out guidelines for a new constitution.

Tamanthi Dam In Burma :The ethnic Kukis will be subjected to forced labour

In a blatant disregard to the internationally accepted principles of the World Commission on Dams (WCD), of public access and participation, equitable resettlement programme, effective environmental mitigation and fair sharing of benefits between the affected communities and developers, the Military Junta of Burma, in collaboration with NHPC of India, propose to build a mega hydroelectric power project in the heart of Kuki inhabited areas in Burma which will displace the ethnic Kukis from their ancestral homeland.

The THPP will adversely affect the biodiversity, ecological balance and the climatic conditions of the region. Floods in the upstream, and changes in the morphology of the riverbed and bank will destroy the habitats of precious species of flora and fauna. Burma's largest National Park is very close to the dam site.

The ethnic Kukis of the area will be subjected to forced labour till the completion of the proposed project. Relocation of 35 Kuki villages and acquisition of 17,000 hectares of agricultural land will result in severe food security and loss of livelihood.

The subjugation of Kukis will continue through the game of outnumbering them and reducing them to minority through a calculated influx and settlement of poverty-ridden people from other regions of Burma as construction labourers for the project.

** Demand that the Indian Government and NHPC stop the proposed Tamanthi Hydroelectric Power Project and all other mega projects in Burma must be stopped until the restoration of democracy and consultative people's participation in decision making takes place.
** Call for ban on and oppose all forms of investment and development assistance in to Burma until genuine democracy is restored
** Urges the Indian democracy and its people to support immediate peaceful democratic change in Burma.

Persecution and Exclusion of Muslims in Burma

Burmese Muslims have become third class inhabitants, who are no longer considered to be citizens. Under the brutal government of Burma Mosques and Muslim schools have been desecrated or destroyed all over the country. No new religious buildings have been permitted to be built. Publication and distribution of the holy Qur’an and other religious texts are not permitted.

The junta instigates riots and propaganda against Muslims. Creates great difficulties for Muslims to obtain citizenship. Birth certificates to Muslim babies are prohibited in Rakhine state. In Rangoon authorities don't allow Muslim babies to be recorded on household registers. National Registration Cards are not issued to Muslims, they must either declare their religion as Buddhist or obtain a different type of card designed to segregate Muslims. Without ID cards, travel means that Muslims have to bribe officials for failing to show their ID or they cannot travel. There are many more cases of discrimination in the work place as well as the military where Muslims and their families have to change faith if they want to keep their jobs.

All these problems are because of the military regime. The regime not only prevents, but also creates these problems, to divert people’s attention from the worsening economic and political situation. See Burmese Muslim Association

The Role of Muslims in Burma’s Democracy Movement

Although the September protests in Rangoon were led by Buddhist monks, Burmese Muslims were among the first to offer water to the monks as a means of showing support for the peaceful demonstrations.

“I saw some Muslims kneel down and pay respect to the Buddhist monks,” said Pan Cha, a Burmese Sikh businessman who arrived at the Thai-Burmese border in early October after being involved in the September demonstrations.

According to residents and journalists who were at the demonstrations, many Muslims supported and participated in the protests and were badly beaten by Burmese security forces.

In a video clip seen around the world, soldiers beat and kick a young Muslim man who is huddled on the ground. They club him with batons and kick him brutally.

Sai Liang lost everything when his village was burned and his family murdered by the SPDC. He lived on the streets and drank alcohol daily. Unable to care for his younger brother, he was forced to abandon him at a temple. Eventually, Sai Liang made his way to Loi Taileng, where he completed high school and SSSNY college. Now, he is a school teacher, and cares for orphans at Loi Tailang, so that they won’t have to suffer as he did. His story is an inspiration, a testament to the indomitable spirit of man.

This year according to the Lunar Calendar, Mon National Day would fall on 22nd February 2008.

We should not forget the fate of our Mon People in Monland who are under constant oppression imposed by the ruling Burmese military regime which is one of the cruellest in the world where there is absolutely no democratic freedoms. They must challenge the Military Regime and defy unlawful orders and the threats imposed upon them to celebrate the Mon National Day Ceremony with freedom.

Trying to claim discrepancies between UN organisations the junta was quoting from a WHO-SEARO paper for the year 2003 that found a mortality rate of Myanmar stood at 66.1 every 1,000, whereas UNICEF's latest estimates are based on 2006. UNICEF stated in the latest report that there were 104 deaths out of 1,000 under-five children in Myanmar. WHO's estimates concur almost exactly with those of UNICEF. WHO's estimated child mortality rate for Burma in 2005 differed by only one to that of UNICEF's, 104 per 1,000 live births as opposed to 105.

Thailand's newly elected government says it will maintain a policy of non-interference in military-ruled Burma, and that democracy and human rights are domestic issues.

Foreign Minister Noppadon Pattama said Thailand will work within the framework of the 10-member Association of Southeast Asian Nations (Asean) but "will have to respect Burma's sovereignty."

Asean allowed Burma to join a decade ago, hoping that membership would inspire change in the country.

During its November summit in Singapore, the group failed to come up with any action to push for democratic reform in Burma.

Despite raising 7.5 million kyat, the local authorities in Ramree township Arakan state are refusing to release funds for road repairs until all the young people in the township join the junta's Union Solidarity and Development Association.