Kurds march in London for Ocalan and Peace

Roughly a thousand Kurds took part in a march in North London on Friday 15th Feb, calling for the release of Abdullah Ocalan and for peace in Kurdistan. The march marked the 9th anniversary of his illegal kidnapping in Kenya.
Pictures are copyright: (C) Peter Marshall - all rights reserved. 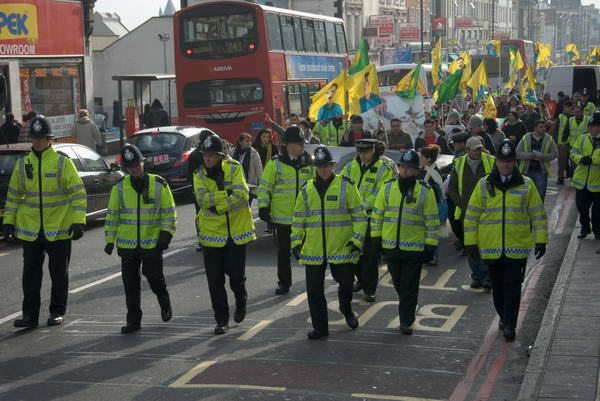 Police at the head of the march 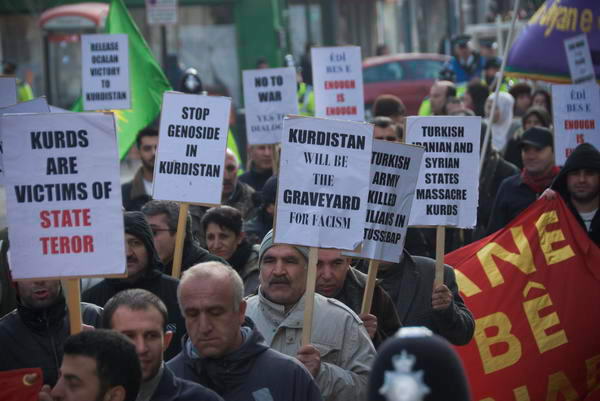 Abdullah Ocalan, the leader of the PKK, (Partiya Karkerên Kurdistan - the Kurdish Workers Party) was kidnapped in Nairobi on 15 Feb 1999 in an operation involving the CIA, the Turkish intelligence agency (and possibly the Israeli intelligence agency Mossad,) and flown back to Turkey where he was sentenced to death (later commuted to life imprisonment) in a military trial.

Since then he has been in solitary confinement, the only prisoner on Imrali, an island in the Sea of Marmara, guarded by over a thousand soldiers.

Although the PKK is listed by many countries as a terrorist organisation, and over 37,000 are thought to have died in the conflict between them and the Turkish authorities, since his arrest Ocalan has called for an end to terrorist operations by the PKK and a peaceful solution to the Kurdish problem.

As one of the banners from the FED-BiR (Kurdish Federation) put it: "Abdullah Ocalan is the Political Will of the Kurdish People." Many of the demonstrators wore T-shirts with his picture and the message "Free Ocalan - Peace in Kurdistan" and some carried banners and flags with his image on them and one man a large framed portrait of him.

The march went through areas of north London with a strong Turkish presence and the police were obviously worried at the possibility of conflict, providing a strong presence. I only went with them for the first mile or so of the march from Dalston to a rally in Wood Green, and although some Turks on the street stopped to watch I heard no comments. Last November there was a large march in Central London by the Turkish community calling for an end to support for the PKK from groups aided by the British govenernment. ( see

More pictures of Friday's march at: