On Friday 15 February, London Catholic Workers Zelda Jeffers and Fr. Martin Newell appeared before Stratford Magistrates for pouring fake blood on Excel Centre, East London the first morning of the DSEI Arms Fair 12th September 2008. The Custom House entrance was closed to both the sellers and buyers as a result.They were charged with criminal damage at one of the entrances to the

(On reading the charge it was found that the word "destroyed" had been written instead of "damaged".) Although admitting that they poured fake blood, both denied that it was criminal damage. In speaking to the court Zelda made some moving and powerful arguments. She said that she felt she had to do something to prevent children being killed by the arms that were on sale. She reminded the court of the young boy who had, two weeks before the arms fair, been killed by a gun which had been bought and sold.

Martin also refused to accept that his act was criminal in any way. He pointed out that splashes of paint are to be found in the Tate Gallery to convey a powerful message. Having poured the fake blood had then knelt down to pray. He was dragged away and arrested. Martin mentioned the Nuremberg Trials which established the principle that to prevent a greater crime from being carried out it was the duty of a citizen and necessary for him to do what could be seen as causing damage to prevent that greater crime. .

He gave the example of a firemen having to break into buildings to save lives. What he was doing at ExCel was trying to prevent great crimes being carried out by those who purchased the weapons of offer. He mentioned the Cluster Bombs used by Israel in Lebanon etc.

The Magistrates asked the legal advisor to advise them on the Nuremberg Acts. Both Martin and Zelda stated that if fined they would not pay.

After consideration Zelda was given 12 months conditional discharge with £175 costs and £50 compensation. Martin, who has a previous record of nonviolent direct action for peace was fined £200, £175 costs and £50 compensation . £15 was added to the bill for each as a surcharge for victim support. Both were told that if they did not pay they would have to return to the court at the on 18th March. 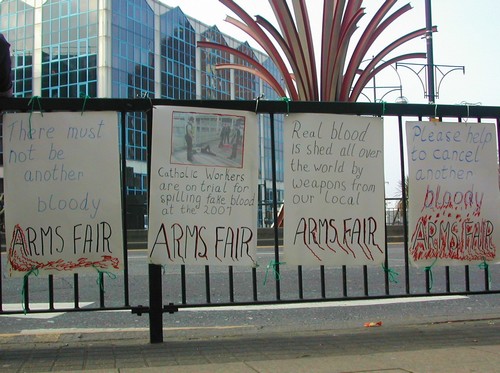 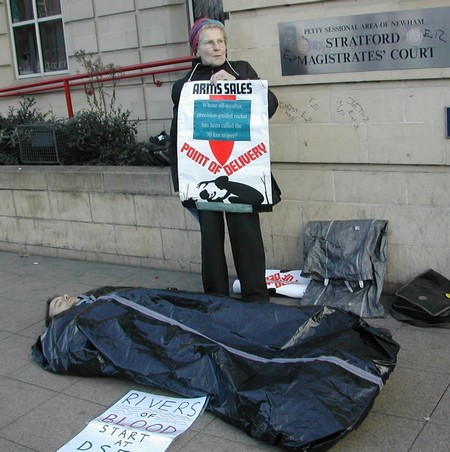 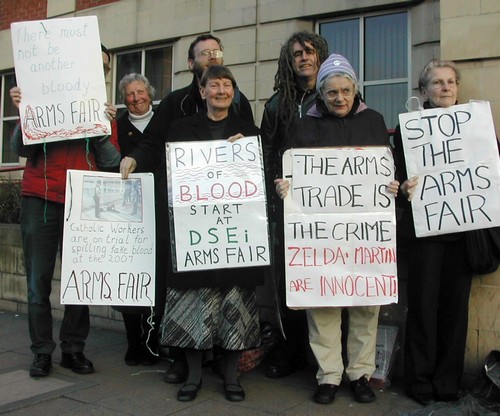