France, Villiers le Bel: "Kill Me Instead, Right On the Spot!"

“I’ve never seen a police operation on this scale” declared the prosecutor who supervised the raids Monday morning in Villiers le Bel, a banlieue in northern Paris where riots took place last November after 2 young people were killed by a cop car. 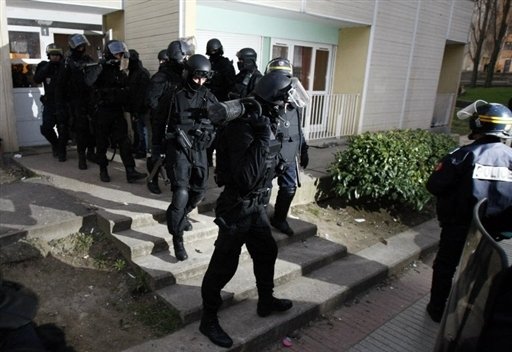 And she added, cynically: “I do not think that there will be too much traumatism in the city”. “I hope”, she added, “that the inhabitants will understand that we are there to restore order and peace”. Nearly 1.500 police officers of RAID, the Central Office for the Repression of Banditry (OCRB), and the Criminal Investigation Department of Versailles and of Ile-de-France, specifically, took part in the operation the purpose of which was to arrest 38 people, supposedly responsible for the riots and of firing at the cops.

The vehicle being used by the general staff of the police engaged in the broad operation which began on Monday is unique: fire and bullet-proof, it is nicknamed “Robocop” by the police. This vehicle is the one of the Brigade of Research and Intervention (BRI—“anti-gang”) of the Parisian Criminal Investigation Department. This “Robocop” vehicle is especially equipped for emergencies, hostage-takings, antiterrorist operations, madmen etc. Completely black, armoured, never passing unperceived in traffic, it is equipped with ultra-high-tech monitoring and transmission equipment, notably with a sort of periscope worthy of a submarine… (According to the AFP dispatches mentioned in the various daily newspapers).

Meanwhile, after this “gigantic” ultra-high profile (racially ultra-profiling) police invasion, where the cops succeeded in arresting 35 of the people they sought, they returned to the attack at the end of the morning, in particular stopping at the family residence of the brother of Larami, one of the November victims. His father, trying to prevent the arrest, shouted at the cops: “Kill me instead, right on the spot! You’ve already killed one of my sons!” He has been accused of showing resistance to the police…


Anonymous squealers and their rewards


To arrive at this “success”, the cops put the call out for informers by distributing thousands of leaflets in the town, but without result.

So they went to a higher stage. According to “L’Express”: “The police force requests testimonies under ‘X’” (i.e. anonymously), but, with a new wrinkle added: “Any element likely to lead the investigation in progress in a favorable direction could be subject to remuneration.”
The explanation of a person in charge: “It was a double appeal: to propose the new procedure of anonymity, which allows, with the agreement of the prosecutor and a judge, someone to testify without giving its name. The other reference was intended for informants, “Tontons” (“Uncles”) as they say around here. The message was clear: ‘Testify, you will be protected, Squeal and you will be paid.”
A winning strategy, so to say. Among the 80 calls received, the Judiciary Police retains ten people ready to testify under X and a handful of "informants" ready to provide information for cash ".

For the resumption of proletarian struggle!

The Authorities triumph: more than one thousand of cops succeeded in arresting about thirty young people at dawn! Alliot-Marie, full of himself, struts and congratulates the police on this “very beautiful operation”. But, one never knows, dozens of CRS cars, representing hundreds of cops took up positions this evening in Villiers le Bel, according to “Le Parisien”. For the director of CRS: “it is not necessary to fear serious disorders”, and if this were to be the case “the prefect took the proper provisions”.

As for the investigation into the death of Larami and Moushin, it is at a dead end. The important thing, Sarkozy said, is to punish those who committed the unforgivable crime of revolting, and defying the repressive apparatus of the State!