Ten protesters held a demonstration at Dorset House Total petrol station at 170-172 Marylebone Rd on Thursday calling on the French oil company to stop fuelling oppression in Burma with hundreds of millions of pounds a year to the brutal regime. Total has for many years been the largest western supporter of the military regime. Villagers forced as slave labour to build Total's gas pipeline nicknamed the soldiers oppressing them as the "Total Battalions". 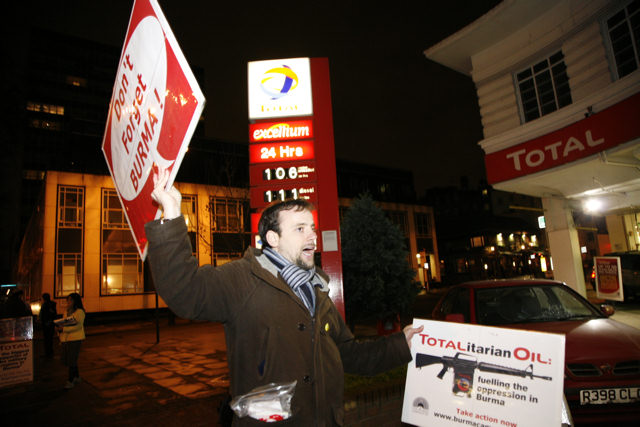 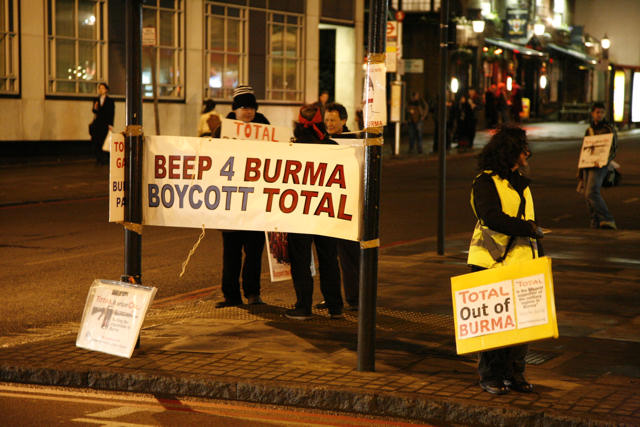 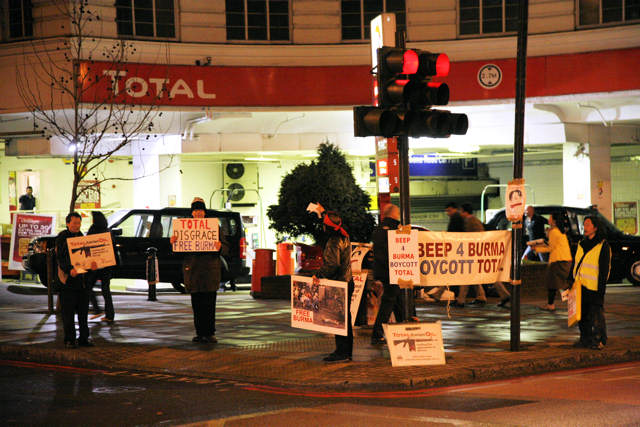 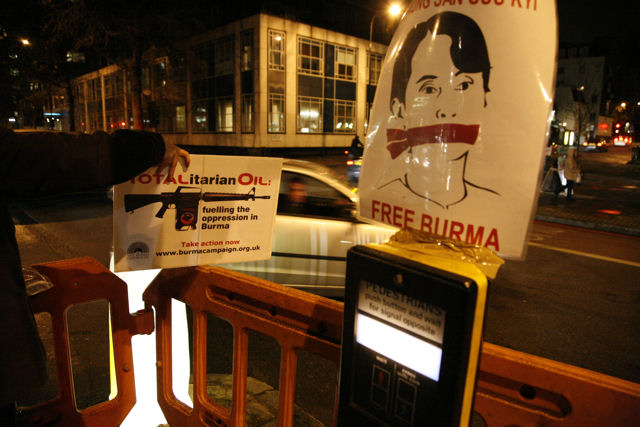 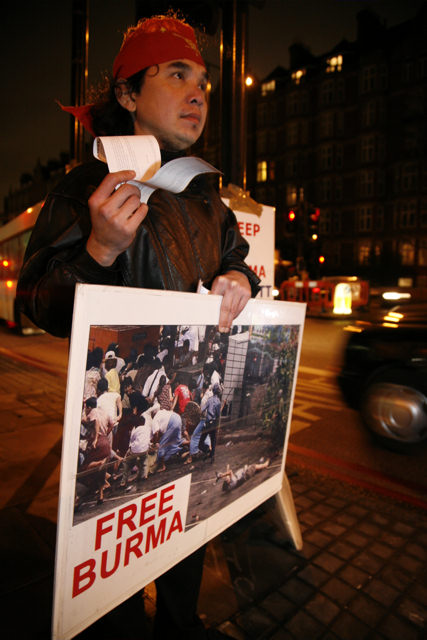 A large "BEEP 4 BURMA. BOYCOTT TOTAL" banner was displayed for the heavy traffic along the Marylebone Road. Many vehicles beeped in support showing that they had not forgotten the suffering in Burma.

The protesters also handed out leaflets and passers-by also gave their support in signing a petition.

Last week the father of Zoya Phan, one of the Burma Campaign UK's staff members, was murdered by agents of the military regime. Two gunmen came to his house in Thailand and shot him in the chest in a cowardly cold-blooded assassination.

Padoh Mahn Sha was General Secretary of the Karen National Union, which represents the Karen ethnic group in Burma in their struggle for democracy and human rights.

He was a greatly respected leader who had dedicated his life for the struggle for freedom. He was killed because of his effective and principled stand against the regime.

His assassination is yet more evidence, as if it were needed, that the regime is determined to cling on to power, no matter what. They see leaders, such as Padoh Mahn Sha, who speak out for freedom and justice, as a threat to their survival.

Zoya and her brothers and sister have set up a fund in memory of their father. Donations can be made online at

http://www.zoyaphan.com. You can donate by credit card from any country or you can send a cheque made out to Burma Campaign UK and post it to Padoh Mahn Sha Fund, care of Burma Campaign UK, 28 Charles Square, London N1 6HT, UK.

A detailed report on Total Oil's involvement in Burma, written by Burma Campaign UK, can be downloaded at

Protests in London next week:


Protests are held weekly but locations may change. For information and reports on protests in London and around the country please see

The Burmese exiled community in the United States is collecting signatures on a petition urging the US Congress to pass legislation asking the multinational company Chevron to end its investment in Burma.

“There is an overwhelming response from the people, both Burmese and friends of Burma,” said Moe Chan, one of the organizers of the campaign, which was launched at the initiative of the National Council of the Union of Burma. Moe Chan is executive director of the Committee for International Movement of Burma Point.

Chevron has a 28 percent stake in the Yadana gas pipeline, the country’s largest. Total of France has the major stake (31 percent), while Thailand’s PTTP has 25 percent and Burma Oil and Gas Exploration about 15 percent.

When asked about the Shan State Army (SSA) South’s view on the dam projects which the Junta is implementing in cooperation with companies from Thailand as well as from China, through an interpreter, Col Yawd Serk, Chairman of the group’s political wing Restoration Council of Shan State (RCSS) said, “We are opposed to any project that will destroy the environment and livelihood of people in Shan State".

KNPP General Secretary, Khu Rimond Htoo said, “If the construction goes ahead, Karenni will be the most hard hit region because most people reside along the river plain. After they built (in 1960s) Lawpita hydro electric power plants in Karenni State (Kayah State), Karenni people do not even get electricity in their houses. From the past experience, we can say that the proposed dams won’t benefit civilians and therefore, I don’t wish it to go ahead”.

But as Myanmar's ruling junta expands logging in the country's teak forests, more wild elephants are being captured and trained for clear-cutting operations that destroy the very habitats in which they roamed freely, activists and industry insiders say.

As logging operations have dramatically expanded, especially in remote regions of northern Myanmar near the Chinese border, some companies are turning to private entrepreneurs to capture and train elephants, business owners said.

"Deforestation would not be occurring if we used the selective-felling system, adhering to the forestry law," he said on condition of anonymity.

"But the advice of experts is ignored by orders from the government." According to the most recent estimates, some 1.5 million cubic metres (53 million cubic feet) of timber worth $ 350 million was exported from Myanmar to China in 2005, most of it illegal, according to Britain-based forestry watchdog Global Witness.

That was a 12 percent gain over the year before, and roughly double the amount exported in 2000, the group said.

Much of the logging takes place in remote areas of the country where it's impossible for outside experts to assess the extent of the environmental damage, but activists have long warned of the devastating consequences.

"This is a particularly destructive approach to logging that causes huge environmental damage," said Mike Davis of Global Witness.

For the elephants working in logging, the clear cutting means they are assisting in the destruction of their own habitat, Uga said.

Around 10,000 people reportedly attended the colourful celebration, which began at 1pm and included speeches, music and food.

An ethnic Chin who attended the event said that the government would not allow them to celebrate Chin national day so they had to find a way around it.

Feb 21, 2008 (DVB)–Residents of Klone Kanyar village were given orders by State Peace and Development Council troops on 1 February to leave their village within 15 days.

Around 250 villagers were ordered to relocate from the eastern part of Klone Kanyar village, which is in Khaw Za sub-township, part of Mon state’s Yay township.

The order to relocate has caused major difficulties for the villagers, particularly as many rely on the village’s fishing industry for their livelihoods.

The Thanphyuzayart Township Peace and Development Council in Mon state has forced tractor-trailer owners to buy sand at a cost of 4,000 Kayt for each tractor load in order to revamp the Shwe Phyu Yatana golf-field in town, said locals.

Tractor-trailer owners in every village of Thanphyuzayart Township have no option except sending money to the VPDC office in the township, said a resident tractor-trailer owner. They started paying 4,000 Kyat for each load since the beginning of this month, he said.

Dhaka: Burmese monks and democratic activists in Bangladesh staged a protest on Wednesday in the border town of Cox's Bazar against senior monks visiting from Burma.

"We have evidence that they came to Bangladesh to organize monks in Bangladesh to support the current military government, so we had to stage a demonstration against them from Bangladesh soil," the monk said.

The Burmese military authority recently sent monks abroad on missions to organize the sangha in support of the junta and to stop the monk boycott of the military.

Monks in Bangladesh are still boycotting the Burmese military government by not cooperating with the demands of the junta and by not accepting any offerings such as food from those associated with the military, after the ruthless crackdown on the monk-led protests in Burma in September 2007.

It has also been learned that local Bangladeshi officials intervened in the religious festival in Bandarban and denied the five senior monks entrance to the town after rumors spread that monks in Bangladesh would protest the festival if the senior Burmese monks attended.

Southeast Asian countries have told Burma that barring pro-democracy leader Daw Aung San Suu Kyi from elections because she once was married to a foreigner would be odd and not in keeping with the times.

An election planned by the Burmese generals must be credible, said the Singapore's Foreign Minister George Yeo.

He added the outcome would affect all members of the ten nation group.

The full text hasn't been released but the Burmese government confirmed on Tuesday that it would bar the pro-democracy leader, Aung San Suu Kyi, from standing for election.

Earlier, the Burmese military government says a new constitutional draft is now complete and ready to go to a referendum within months.

Although little is known of the constitution, it's thought to entrench the political supremacy of the military: the document was widely expected to bar citizens with foreign spouses, such as Aung Sang Suu Kyi, from seeking public office.

-The main opposition party, the National League for Democracy has responded the government's statement saying the election scheme is unjust.

-The spokesperson of the Communist Party of Burma analyses that the current move by the military government is trying to diminish the role of NLD and Daw Aung San Suu Kyi together.

Feb 20, 2008 (DVB)–As the Burmese military continues to use foreign-made weapons against its own people, it is time for the international community to adopt a comprehensive ban on military trade with the regime.

According to the Sweden-based Stockholm International Peace Research Institute, the key arms exporters to Burma in 2005-2006 were China, India and Serbia and Montenegro.

China was the biggest arms exporter with a value with 2.5 billion US dollars.

While there are no crucial and strategic security threats from either internal or external enemies or actors, the Burmese army has doubled in size since 1988 and continues to expand, with active forces estimated at 428,250, ranking it 12th in the world, and a total force of 500,250, ranking it 26th in the world.

Japan has never imposed economic sanctions on Myanmar but decided to cut its aid to the pariah state in the aftermath of the September crackdown in which one Japanese photo-journalist, Nagai Kenji, was shot dead.

On Monday, a delegation from Japan’s Royal Police arrived in Yangon to investigate the death of Kenji.