Pics of "End the siege on Gaza" Demo

Pics from the demo against the Gaza siege, Saturday 23rd February 2008, in front of Downing St. 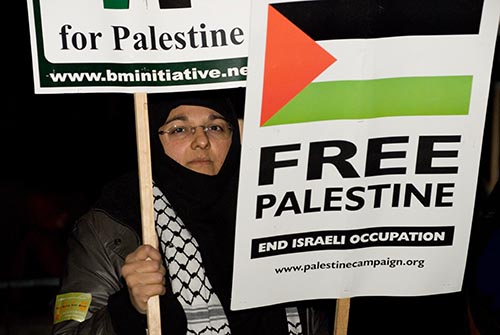 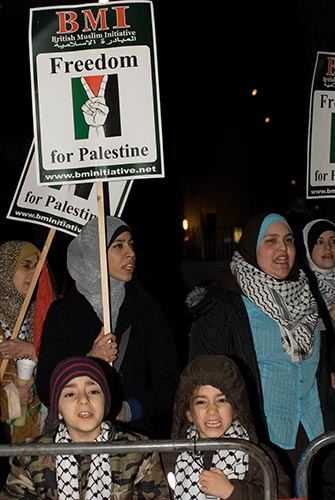 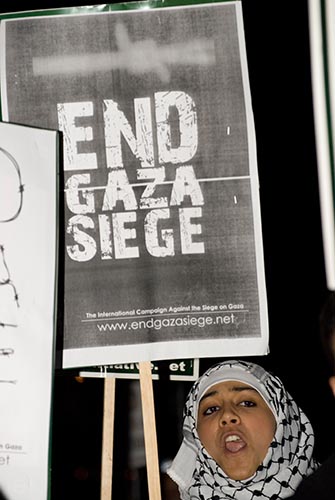 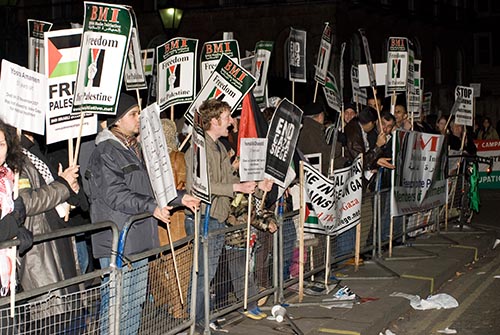 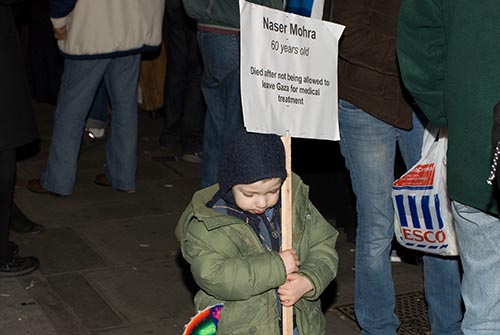 Pics from the demo against the Gaza siege, Saturday 23rd February 2008, in front of Downing St.

Thank you - Keep at it

Thank-you so much for this.

Do you know if any representatives have been able to (or tried to) meet with officials with the Brown Government? I'm asking because Israel is currently on a 'diplomatic mission', meant to shore up support (minimize criticism, official international condemnation and reaction) to the invasion and reoccupation of Gaza that was planned before Annapolis, which now appears to be imminent.

We must stop this International Crime before it occurs.

Note that the attack on Iraq constituted 'the Supreme International Crime'.

This attack was planned long before the Annpolis Conference, which again saw Israel's ruling Extremists rejecting peace, negotiation and compromise.

The Israeli government has been reportedly approved a military plan, similar to the U.S invasion of Iraq in 2003, within underway preparations to massively attack Gaza.

According to the Jewish Press online website on Wednesday, Israeli sources said that a plan, drafted by the Israeli general staff, has been endorsed by the Israeli defense minister, Ehud Barak.

The website also reported that such a planned invasion has been discussed by several panels of the Israeli cabinet, involving many cabinet members.

A part of the plan, Israel is intending to diminish the Hamas regime in Gaza, with targeting the Hamas leaders and controlling most areas of the Gaza Strip, in a way that dejects momentum of likely international response.

At least 10,000 to 20,000 soldiers, backed by warplanes and warships and battle tanks, will be employed in the Gaza invasion, to be deployed at four main access, including the Mediterranean sea side.

In addition, the Israeli army will dismember the coastal region into three parts, starting with the Gaza international airport of Rafah city in the south, the Jewish online publication added.

Nevertheless, the plan requires approval of the Israeli prime minister, Ehud Olmert, who is supposed to await the United States' permission to the proposed invasion of Gaza.

Among the possible scenarios of such an offensive, an Israeli army presence on the Gaza-Egypt border line, with a possibility of installing a NATO force into the region, following the Israeli withdrawal.

Recently, a number of Israeli ministers have gestured possibility to eliminate the Hamas regime in Gaza, once and for all.

Israel has warned of massively attack the Gaza Strip as some ministers proposed leveling to the ground entire Gaza neighborhoods, after having evacuated the residents.

Olmert, Livni and Barak know that Israel’s public relations apparatus is currently facing a problem. The Western world, which maintained its support for Israel’s right to act against the rocket attacks from Gaza employed by Hamas and its associates, is inclined to criticize the Jewish State over the Gaza siege and economic sanctions.

(Collective Punishment is a War Crime. The rockets that Israel is trying to use to justify attacks it planned long before Annapolis have been provoked by its imposition of Collective Punishment, its War Crimes. Its own defence staff warned that when these illegal measures were increased months ago, that this policy would provoke such a response.)

Israel’s stock is dropping, reaching the point of a condemnation by British foreign secretary David Miliband last weekend. The concern is growing in light of the possibility that Israel will need to embark on a wide-scale military operation in Gaza early in spring.

(It doesn't 'need' to do this, and therein lies the rub. Israel's ruling Extremists simply reject any notion of ending its war to wipe Palestine off the map, especially if it involves partaking in a 'peace process' it can't control, one which would force Israel to give back much of what it has stolen, as demanded by international Law and UN Security Council Resolutions.)

Olmert is reading the international map and he knows what Israel has planned should the Qassam fire continue. Together with Livni and Barak, they postpone the decision to embark on major Gaza operation every week. Yet the three of them know that it is impossible to go on with a situation whereby civilians are subjected to Qassam barrages and a game of Palestinian roulette.

(But the facts that Israel's attacks on Gaza have doubled since Annapolis, as has the murder of Palestinian civilians during these attacks, and the severity of Israel's War Crimes in Gaza are apparently inconsequential. Israel is wholly responsible for this 'crisis', one which could quickly be averted if they truly wanted this to happen.)

In closed-door sessions, Olmert’s people make it clear that should Israel decide on a wide-scale operation, it would need international room for maneuver. It needs support that would be similar to what Israel enjoyed in the last war in Lebanon. This will enable Israel to complete an effective military operation and also, if necessary, would facilitate the involvement of a UN-mandated multinational force in order to prevent the emergence of a new Gaza vacuum.

(The only UN force needed is one to seperate the Israelis from the Palestinians, and to enforce the many Security Council Resolutions Israel is currently in violation of.)

Berlin, which is undecided on the prospects of a major Israeli operation, was a good place to start. On the one hand there is Chancellor Merkel there, who was convinced of the need to back Israel’s actions – ranging from continued civilian sanctions to expanded military operations. On the other hand, there is German Foreign Minister Frank-Walter Steinmeier, Merkel’s coalition partner, who does not automatically back everything Israel says.

(Appeasement doesn't work. Haven't we learned that by now? If you allow Israel this murderous rampage, where does it end?)

Olmert presented to the German administration the distress faced by Sderot and Gaza-region residents, pointed to Hamas-Iran ties, and warned that fundamentalist terrorism has no boundaries. This public relations work was apparently useful.

(But that's all it is; empty PR. The attack which has been planned for months would make the abject suffering of Gazans immeasurably worse.)

Now, officials at the Prime Minister’s Office are expecting the grand campaign to start.

Yesterday, Foreign Minister Livni took 70 foreign diplomats to see a 15-second film, about the 15 seconds that Sderot residents have in order to find a shelter from the exploding Qassams. Now she traveled to Washington, where she will meet her counterpart Condoleezza Rice, who is expected to arrive here next month. In the meeting Livni will discuss the intolerable situation in the south.

(Immorality breeds contradiction. Nothing the residents of Sderot have to 'endure' because of their Government's rejection of peace even approaches the suffering endured, the terror felt, by the people of Gaza.)

Meanwhile, Defense Minister Barak traveled to Turkey, and spoke about the need to safeguard southern residents even before promoting negotiations on the establishment of a Palestinian state. Other ministers will travel worldwide, while our ambassadors will work hard.

Berlin came first, as a harbinger of what the political leadership in Jerusalem wishes to achieve internationally, ahead of the hot summer in Gaza.

'IDF should wipe out parts of Gaza'

Probe: At Least Half of Palestinians Killed by IDF Were Civilians

It's All Right, I'm Only Bleeding

An Experiment in Famine: Hamas is Not the Real Issue