Three articles of news from the campaign, (I think) all recently updated despite the dates and also 10 videos from the USA, Germany and the Netherlands... 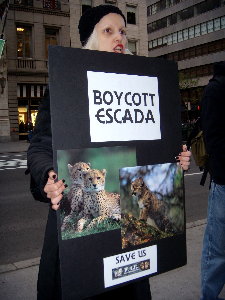 Even if the decision-makers at the Escada group are still clinging to
their company policy and are refusing to go fur-free, now they are being pushed in that direction by other parties. More and more outlets which sell collections by Escada and daughter companies are deciding to give up selling fur products, mostly as a result of protests by animal rights activists.

The Flairline Fashion Group, which has fourteen branches in Ireland, and also sold Escada products, has become completely fur-free after protests by local animal rights groups.

In Switzerland activists wrote to numerous fashion companies, who offer Escada products in their assortment, asing them to end the sale of fur. The Swiss firm, Weber, announced as a result that they would be discontinuing the sale of fur in al their stores as of Autumn 2008. The company also said they aim to be parting from the BiBA collection generally, which is another loss for Escada.

Examples like this encourage us to go on and get fur out of all stores
and all closets, bit by bit, however ignorant companies like Escada are.
Leave the furs to those who own them - the animals!
Until Escada sees this too!

Since October 2007 protests against the fur trade are being held within an Escada-Campaign. The animal liberation activists are demanding an end to the fur trade at Escada.

On the first Febuary week end a day of action was called. Many animal liberation groups and activists from Europe and the USA organised demonstrations and civil disobedience. This raised the pressure against the company to do as many others have done after years of protest and quit the sale of fur products.

This article gives an overview of th protests on the last weekend of action.

You can´t forbid it - you can´t ignore it
Global Days of Action against the fur trade of the Escada group.

While Escada tried again over the last weeks to ban the Ascada-Campaign through their lawyers, activists were getting prepared for protests on the first February weekend to set a clear signal against the murder of animals by the self proclaimed luxury fashion company. The Global Network Against the Fur Industry had called out to actions against the Escada group and in particular against the daughter company, BiBA.

The German fashion company belongs 100% to the Escada group and also does not want to give up the sale of fur or the violence which is connected to it. Most of the 300 branches are in Germany, usually in larger shopping malls. However activists still managed to find ways of targeting BiBA this weekend. In Hamburg, activists wearing fur coats and covered in fake blood laid themselves outside a BiBA store in one of the town´s main shopping streets, while a further 30 people called out their solidarity with the victims of the fur trade. In Lucern in Switzerland, staff at a BiBA store felt they had to close the store 20 minutes after the beginning of the demonstration. Further demos were reported in Munich, Berlin, Münster, Berlin, Bielefeld, Cologne,Oldenburg, Gissen, Dortmund and Hannover.

Animal liberation activists also brought their protests inside the shopping malls which contain BiBA stores and risked charges of trespass. In a mall in Hamburg, no less than 2000 mini flyers were thrown from the top floor, while in Berlin an large banner was hung inside a shopping centre and 1500 little flyers were dispersed throughout several floors.

Escada, too, was the target of varied protests. After demos at Escada stores in Vienna (Austria) and Luxembourg City on Friday, in Warsaw (Poland) protesters in masks and fancy dress demonstrated with noisy instruments inside an Escada shop. They showed the staff in their own way what they think of Escada for ignoring the cries of the animals.

Employess reacted by alarming the security services. For the first time, activists from Barcelona, Washington DC and Minneapolis participated in the campaign. But also in New York City, Genf, Munich and London, where demonstrations have previously been held, activists organised determined protests this weekend.

In the many action reports which are posted on the website www.escada-campaign.org, activists promised to continue to make their anger at Escada´s ignorance known and to carry on their protests until Escada and all its daughter companies (BiBA, apriori, cavita und Laurèl) ditch all forms of real fur.

At the end of December 2007 Escada had already brought an injunction
against the "tierbefreier" before the district court of Münster. This
injunction forbids the association from publically, especially on the
website

http://www.tierbefreier.de, " from reporting about illegal acts or
crimes, which occur within the framework of the anti-fur campaign
targeting the claimant (Escada), particularly when the reports concern
criminal damage of property belonging to the claimant, their employees
or their management, or so-called "home-visits" to employees or management."

In this way Escada wants to prevent media coverage of Animal Liberation
Front actions. Although no home visit has to date occured, the
injunction bans any report of these in advance.

Contravention of this injunction may result in a fine of up to 250,000
Euros or a prison sentence of up to 6 months.
The lawyers´ office who filed the injunction is again Avocado based in
Cologne. This firm has ran cases against animal rights activists on
several occasions in the past. Up till now they had only represented
vivisection laboratories, for example they had the publication of
photographic material from the primate laboratory Covance banned. Escada
are showing their position quite clearly when they choose to work with
this firm.

The association "die tierbefreier" does not have any connection to the
ALF, but has undertaken the media relations for actions against violence
to animals for the past 20 years. This injunction is a restriction to
our work which we cannot accept. Judicial measures are being considered.

http://www.youtube.com/watch?v=uMuV8Q2MSk4
(slideshow and video footage of march in Germany)

"Fur is murder, Fur is death. Free the animals - ALF"

"For the mink and for the fox, smash there windows glue their locks."

"Stop the insanity, no blood for vanity"