short update on newsflash reported at

http://www.indymedia.org.uk/en/2008/02/392385.html
there are serious concerns for the welfare of the three protestors who were arrested by inspector fox outside the gates of parliament last night. their protest was about about the iraq war, the genocide occuring there, and the war criminals here who still evade justice.

police have admitted in previous instances that arrests are not a proportionate response to 'unauthorised protest', and they generally use 'report for possible summons' instead.

however, last night at around 9pm, the three protestors, barbara tucker, stephen jago, and 'ant', were taken to belgravia police station. police then tried to search tents to seize 'evidence' - they wanted to confiscate barbara's 'blood on their hands' banner - but backed off when brian haw pointed out that it's been shown in court that police have no power of seizure under SOCPA and that they did not have warrants.

inquiries for information at belgravia police station this morning were flatly refused by the custody officer, but it was revealed that the three are still in custody, having been held for 14 hours, and are due to be 'processed' shortly. nothing is known about their welfare, whether any additional charges have been laid, or why they have been detained so long.

any station support is will be welcomed. 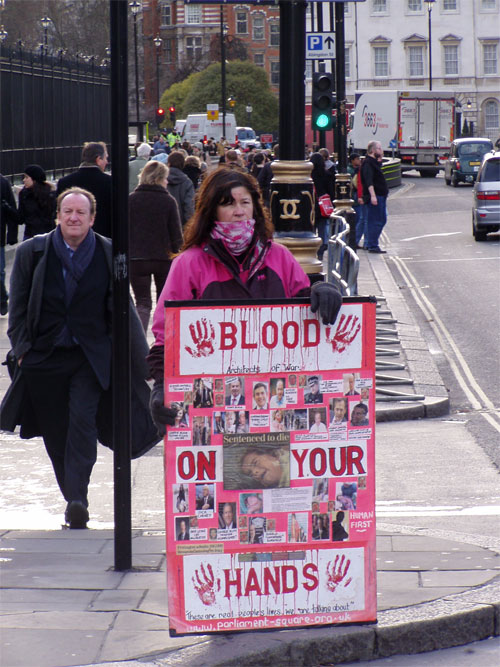 blood on their hands