Home Office Appeal against SIAC Decision: No Deportations to Libya!

Another one of those issues happening right under our noses that we know little about: the British government is seeking to deport foreign "terror suspects" to countries where they face the risk of torture and the death penalty. The British government must respect human rights law and understand that a "suspect" is no more than that. 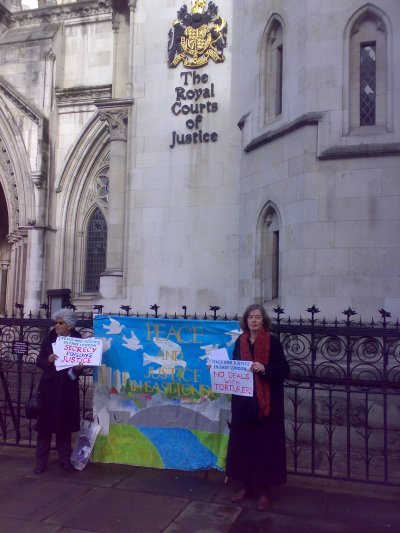 Peace and Justice in East London outside High Court 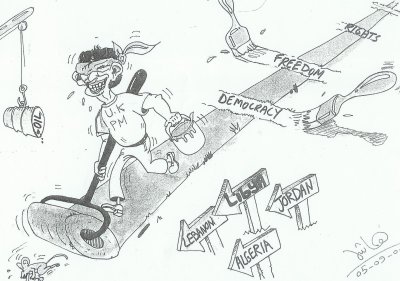 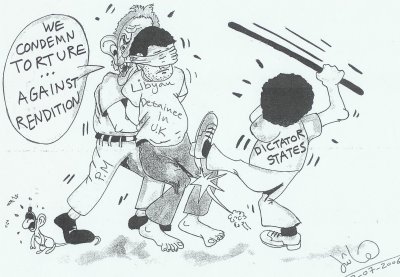 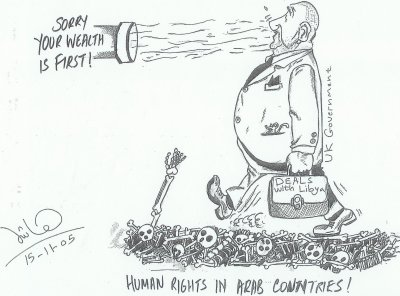 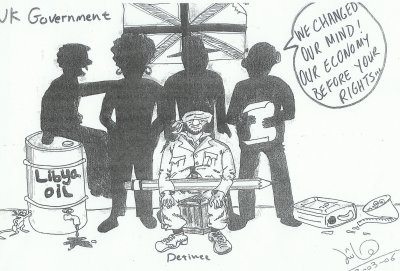 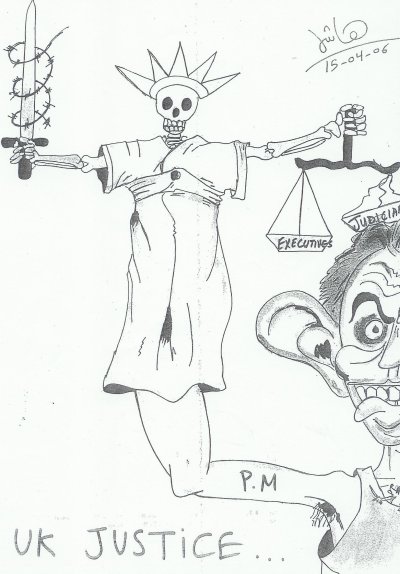 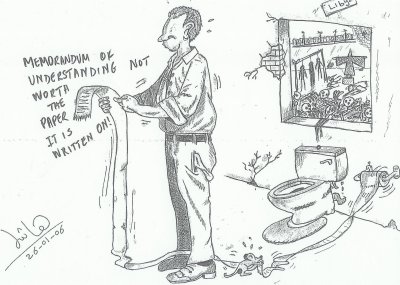 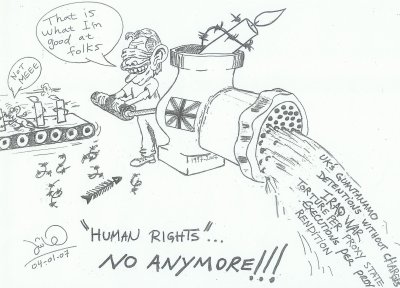 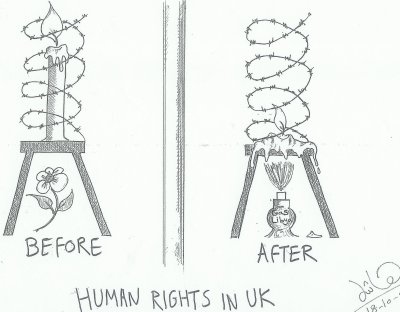 Home Office Appeal against SIAC Decision: No Deportations to Libya!

This week, as the High Court in The Strand, London, heard the vitally important McCartney-Mills divorce saga and as lengthy queues formed outside to enter the hallowed public gallery of the Diana Inquiry, half a dozen campaigners from CAMPACC (the Campaign Against Criminalising Communities) and Peace and Justice in East London gathered outside the High Court to hold a demonstration in support of an appeal case taking place inside with serious implications for human rights and the treatment of foreign terror suspects in the UK.

In April 2007, SIAC (the Special Immigration Appeals Commission) judges ruled that two Libyan “terror suspects” – known as DD and AS – could not be deported to their country of origin as they would face the risk of being tortured and executed if returned there. In his ruling, SIAC chairman Justice Ouseley, stated that there was a real risk of Article 3 of the European Convention on Human Rights (ECHR) – the prohibition of torture - being breached if they were returned to Libya. This judgment struck a blow to the government’s anti-terror policy of concluding Memoranda of Understanding (MoU) with several Middle Eastern countries – Libya, Jordan and Algeria – whereby the government claims that they have signed agreements assuring them that “terror suspects” returned to their countries of origin would not face torture, arbitrary imprisonment or even worse, the death penalty. These MoUs have been criticised as being mere promises on paper given by countries with extremely poor human rights records. Although the men had won, the government appealed; they were released on bail but under severe conditions, placing restrictive boundaries on their freedom of movement in the areas they live in and compromising their freedom of association without prior Home Office approval.

On Tuesday 26 February 2008, the Home Office appeal case against this decision started at the Court of Appeal. On the first day of the hearing, Philip Sales QC, representing the Secretary of State for the Home Department (appellant) presented the government’s grounds for appeal which pivoted fundamentally on the question of whether or not there was a “probable risk” of a breach of Article 3 if the respondents – DD and AS – were returned to Libya. The government contended that the SIAC judges had failed to bear in mind all the evidence presented by an expert witness from the Foreign and Commonwealth Office, a not wholly independent expert, concerning whether or not the Libyan government was likely to adhere to its commitments to respect human rights made in the MoU and the “improved” human rights situation in Libya. Mr Sales criticised SIAC’s approach to the evidence and alleged that the judges may have misdirected themselves in their analysis and approach to the evidence provided by the FCO. By the end of the first day, which ended with only the government lawyers having presented their appeal case, it appeared that the judges were thinking that no errors in law had been found in the judgment itself and the points raised by the government were merely a question of the words used.

Edward Fitzgerald QC, representing AS and DD, presented the respondent’s case on the second day of the hearing, 27 February, stating that the Home Office was seeking to rewrite the law and the facts of the case for the sake of making an appeal without having any coherent legal basis to their approach. The Home Office case came to an end on Wednesday and was followed by a hugely significant decision in the European Court of Human Rights on Thursday in the Saadi v Italy case in which the approach taken by AS and DD was upheld by the European Court of Human Rights; this case involved an attempt by Italy to deport a Tunisian national to his country of origin. This judgment undoes the case of the Home Office, in which the British government had intervened last year, along with several other European countries, to allow the deportation to go ahead in spite of the real risk of torture and other forms of ill-treatment.

The case resumes on Monday 3 March during which the rest of the appeal case of the two Libyans will be heard in the morning (both open and closed sessions). On 3-6 March, Abu Qatada’s appeal hearing against deportation to Jordan under a similar MoU will be heard. Campaigners will again gather outside the Royal Courts of Justice in The Strand on Monday 3 March at 9.30am to show their support for the two Libyans and the Jordanian. Please join us for a short demonstration and at the hearing. Please contact Peace and Justice in East London for more details:

elpeaceandjustice@yahoo.co.uk Judgment is likely to be delivered in both cases in a month’s time.

BACKGROUND:
SIAC: the Special Immigrations Appeals Commission, one of the most controversial courts in the UK, was set up by the 1997 Special Immigration Appeals Commission Act. The court deals with "appeals against decisions made by the Home Office to deport, or exclude, someone from the UK on national security grounds, or for other public interest reasons” . It was seldom used until the 9/11 attacks and has since then been used in the war on terror as a tool to threaten and intimidate migrant communities, wholly of Middle Eastern and North African origin. Most SIAC cases are heard under anonymity orders and thus defendants are identified by letters of the alphabet - DD and AS in this case – rather than by their names. Many of the cases are heard in secret hearings that the public and the press are not allowed to attend. A lot of the evidence presented at SIAC cases is intelligence-related and is presented by MI5-vetted “special advocates” who are said to represent the appellants’ interests (as SIAC is an appeal court). Secret evidence given by the government to the secret advocate is not presented to the appellant or their solicitor.

While this system is currently only open to non-British nationals, under current proposals tabled in the Counter-Terrorism Bill 2008, the government is seeking to institute secret hearings for British nationals too in certain circumstances related to national security.

Defendants in SIAC cases are held in prison or under the severest conditions of bail. Many of these individuals were arrested in 2001 and held in HMP Belmarsh under the terms of the Anti-Terrorism, Crime and Security Act (ATCSA) 2001. When, in 2004, the House of Lords, ruled that Article 4 of the ATCSA 2001 was a breach of human rights under the ECHR, resulting in the 2005 Prevention of Terrorism Act, the Belmarsh “terror suspects” were granted temporary respite by being “released” under control orders only to be rearrested several months later, this time for deportation to countries where they may be tortured.

SIAC proceedings have been criticised by human rights and civil liberties organisations such as Amnesty International and Liberty.

HUMAN RIGHTS IN LIBYA: Although Colonel Gaddafi has now agreed to pay compensation to the US for Lockerbie and sell oil to the rest of the world, thus emerging from his pariah-hood and having acquired international acceptance, the human rights situation for most Libyans has not improved. While some improvements have been made, Libya still has an extremely poor human rights record and arbitrary detention, “disappearances”, the abuse of prisoners and torture are common occurrences. British resident and former Guantánamo Bay detainee Omar Deghayes from Brighton was threatened by Libyan agents who visited him while detained in Guantánamo Bay that they would kill him if he was returned to the country by the Americans.

Freedom of association is greatly restricted in Libya and there is no possible opposition of the regime.

MEMORANDUM OF UNDERSTANDING (MOU) WITH LIBYA: Back in October 2005, the British government signed a Memorandum of Understanding (MoU) with Libya “to facilitate [the] deportation of persons suspected of activities associated with terrorism” . This agreement was to “ensure” that any “terror suspects” returned to the country would not face torture. Although, at the time the government stated, “the Government firmly believes that the assurances provided by this type of MOU should enable the British Courts to allow the deportation of foreign nationals who threaten national security or whose presence is not conducive to the public good; and that such deportations will uphold the UK's international obligations” , this agreement and similar agreements made with Jordan and Algeria have been criticised as not providing real assurances.

This MoU was signed by a former British ambassador to Libya who is the same expert witness provided by the FCO in this case.

DETAINEE AS: excerpt from an article written by AS on www.cageprisoners.com :
“I am now very frightened to be sent back to Libya, as there is no safety for me in Libya. If I could be unfairly treated in this country, what can I expect from a dictatorship? Libya is a very dangerous place for me. This Government (the British Government) are aware that I will face torture and the possibility of the death penalty which is why they signed this memorandum. They signed it to get us protection from that dictatorship not to be tortured or killed once we arrive in there. How dare the British Government deal with a dictatorship where 1200 Islamist prisoners were executed in Abu Salim prison – Tripoli – just in June 1996 by the same regime they deal with, it was one of the biggest massacres has ever happened in prison. I think those are the criminals who should be brought before an international Court as they believe in their democratic fable. Has the prime minister forgot the past of his brother in values General Gaddafi or his values not suitable for his enemies – Muslims – why doesn’t he decide to execute me here in this country? I promise to sign for that but my conditions are to do it openly in this country, at least then people will understand what they are planning behind closed doors.”
Read an interview with AS on

DETAINEE DD: left Libya as he opposed the Gaddafi regime. He sought asylum in many countries before finally being granted it in the UK. He was detained in late 2005. If returned to Libya, as an opponent of Gaddafi’s, he risks facing the death penalty. Also known as the “cartoonist”, DD has drawn many cartoons in protest at his unfair treatment by the country that granted him asylum and once recognised the risk that return to his country posed. Some of these are posted below. These cartoons, others by DD and artwork, including pottery and sculptures, by other SIAC detainees will feature as part of two festivals in the summer. More details to follow.