There was a disappointing turn out for Saturday’s ‘Freedom to Protest’ event against the SOCPA legislation in Trafalgar Square, London on Saturday, with demonstrators hugely outnumbered by police.
Pictures © 2008, Peter Marshall, all rights reserved. 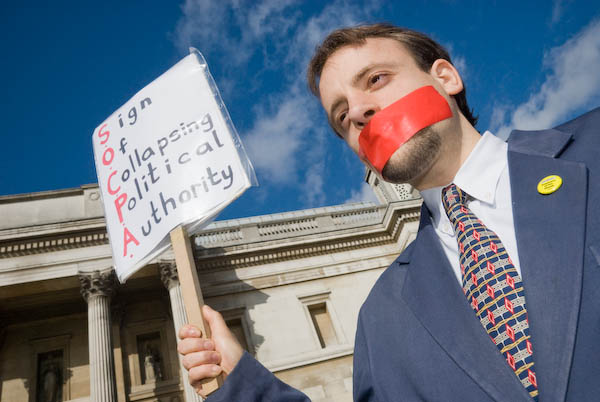 SOCPA placard outside the National Gallery 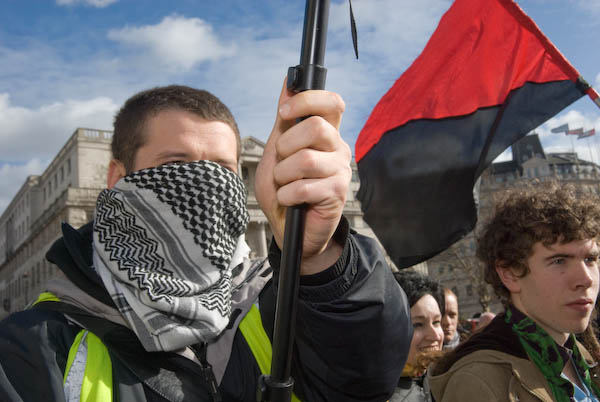 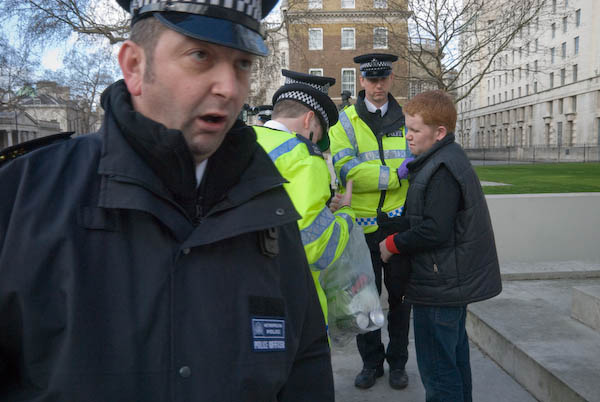 Officer attempts to impede photography during stop and search, Whitehall 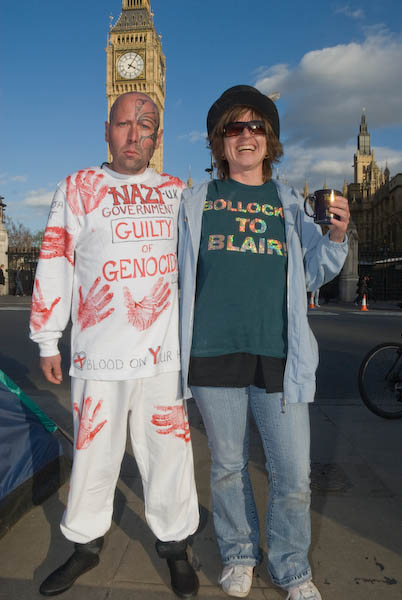 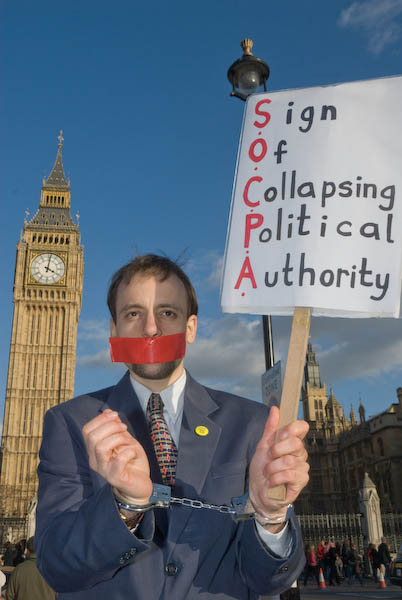 Disproportionate policing was the name of the game in Westminster on Saturday, where hundreds if not thousands of police were on duty over the area in an obvious attempt to avoid a repeat of the January 'Freedom to Protest' debacle. (See

Despite the gravity of the issue, only a small group of demonstrators turned up, and at the start of the event they were outnumbered by the media - and were only a minute fraction of the police presence. A few arrived later, and some went home quickly, but at the peak numbers were still under 50. A senior officer came over at the start and issued a warning that serious action would be taken if any demonstration in the SOCPA designated area were attempted, handing out copies of the usual notice. A demonstrator took notes and the FIT photographer photographed and filmed everything that moved.

Later this photographer objected to demonstrators photographing him from a close range and several times pushed out his arm in an unfortunate gesture resembling a Nazi salute, at one point hitting a demonstrator in the throat. Later, harassed by a 'serious criminal' with her 'Illegali-Tea' shopping trolley, he ran off and scuttled off up the steps of the National Gallery to escape, much to the amusement of all present, including even some of his colleagues.

A small group of demonstrators decided to set off for Parliament Square, walking quietly along the pavement. One young man who managed to evade the police (but not several press photographers) was stopped and searched by police opposite Downing St, who forced him to remove his balaclava. The most suspicious things found on him were a National Express ticket and a strong Newcastle accent.

In Parliament Square the peace protest was continuing as usual, and one protester was producing a splendid chalk pavement drawing. As I watched a police community support van drew up by her and it looked for a moment as if she was about to be apprehended, but seeing several press photographers taking pictures, the van drove off.

Later in the day a small group of the 'Freedom to Protest' demonstrators walked down Whitehall and through Parliament Square, and a short protest was held. Followed by a police van and the FIT photographer and minder they then made their way to a pub on the Horseferry Road, causing a little consternation among police around the Home Office as they passed close by. But the demonstrators went into the pub and police and press went home.

More about the event and more pictures on My London Diary

For anyone one who doesn't want to fall foul of the law re: SOCPA section 132, note that there's no legal requirement under SOCPA to fill out the form provided by the Met for notifying a demo within the designated area around parliament: they just use it to fish for extra information they can use to repress you and prevent you from exercising your right to protest.

The template below incorporates all the information legally required (under SOCPA section 133) for a static demonstration within the SOCPA designated area and is therefore a valid notification, provided it is sent *by recorded delivery* or delivered *in person* to ANY police station within the Metropolitan Police District, arriving at least six clear days before the demonstration, or if not practicable then no less than 24 hours beforehand.

If you want to check the exact wording of the statute, see:


For the attention of the Commissioner of Police of the Metropolis:

This notice of demonstration is served precisely in accordance with the requirements specified in Section 133 of the Serious Organised Crime and Police Act 2005.

(d) Whether it is to be carried on by a person by himself or not: by self / not (delete as appropriate)

The above named person hereby requests that written authorisation for the demonstration to which this notice refers be granted by the Commissioner of Police of the Metropolis in accordance with Section 134 of the Serious Organised Crime and Police Act 2005 and the rights guaranteed by the Human Rights Act 1998 and the European Convention on Human Rights. The person notifying requests that the letter of authorisation be sent by post to the above address.