Manchester No Borders held a noise protest today to expose the construction company that will carry out the planned expansion of the immigration detention centre at Manchester Airport. Carillion plc have been awarded contracts to carry out the work. 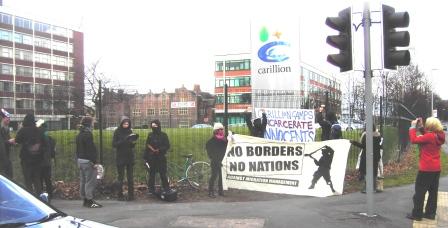 We staged a short but noisy protest outside the Manchester offices of Carillion National Building, drawing attention to the planned expansion of the detention facility and of Carillion’s involvement. Banners were attached to the compound’s fencing. While some employees seemed to agree with the reason for our protest, security guards called the police. When a police van arrived 10 minutes later, the small assembly of protesters dispersed quickly. A few were stopped by the cops however, who wrote down their descriptions.

The detention centre at Manchester Airport is a short-term holding facility, contracted to Group 4 Securicor. It is intended to hold passengers detained by airport immigration staff for further questioning or those who have been refused permission to enter the country and are awaiting removal on another flight. In fact, however, its main function is currently as a staging post for detainees being transferred from one place of detention to another, and from detention centres in the North to airports in the South.

Few of the detainees have committed any crimes. Rather, they are arrested and detained when their asylum claims are refused, their visas run out, or they are otherwise found to not have the “right” to be in this country. This includes school and university students arrested in the middle of term time, migrant workers, and families who have long settled in the UK and who are often “snatched” in dawn raids on their homes.

With construction work beginning in the next few weeks, the centre’s holding capacity will increase from 16 to 32. This is in line with the government’s plans to increase detention capacity from 2,500 to 4,000.

Carillion plc is a UK-based support service and construction company, with annual revenue of around £4bn and operations across Britain and overseas. Carillion’s business units range from nuclear and defence to highways maintenance.

As part of Carillion’s group structure, Carillion National Building has a focus on what they call the “defence and secure sector”, designing, constructing, financing and operating prisons and law courts across the UK. As such its customers have included HMP Brixton, Altcourse Prison Liverpool, the UK Passport Service and Manchester Magistrates’ Court.

In Manchester, Carillion has recently completed the construction of landmark building Beetham Tower, which houses the Hilton Hotel and luxury apartments.

With its Head Office based in Wolverhampton, Carillion National Building has a number of UK offices across the country. In Manchester, their offices are at 550 Mauldeth Road West, Chorlton.

some photographs are here