Andy Worthington, author of “The Guantánamo Files”, reports on an act of political censorship against a promotion aimed at fair trials for Guantánamo prisoners in a Lush store in a shopping centre in Reading. 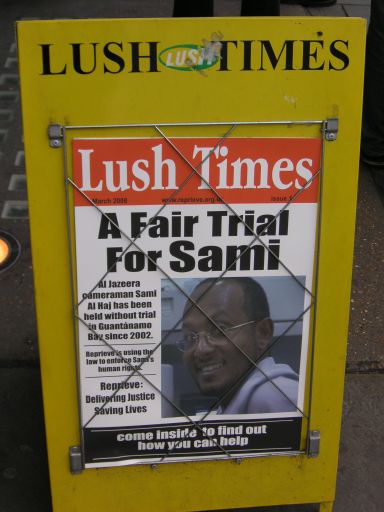 One of the “distasteful, offensive or political” posters that upset the Oracle.

In an act of political censorship, the management of the Oracle shopping centre in Reading has demanded that the Lush cosmetics store (

http://www.lush.co.uk/) remove material in its storefront calling for prisoners held without charge in Guantánamo Bay to receive a fair trial.

The Oracle requested that posters featuring Guantánamo prisoners Sami al-Haj and Binyam Mohamed -- which relate to a promotion with the legal action charity Reprieve -- be removed from the store’s window because the suggestion that they should receive a fair trial contravenes one of the terms of Lush’s lease; namely, that retailers are prohibited from displaying signs which, “in the reasonable opinion of the Landlord,” are of a “distasteful, offensive or political nature.” In a letter to Lush, the Oracle’s management team stated that in making this demand they were “trying to protect our brand.”

Noting that the GAME store was openly advertising Grand Theft Auto IV, Gears of War 2 and Destroy All Humans 3, that the Vue Cinema was showing a series of films “of questionable taste”, including Diary of the Dead and Rambo, and that Starbucks was allowed to advertise on the Oracle website for its “social, environmental and economic” causes, Clive Stafford Smith, Reprieve’s Director, said, “Films and games that glorify war and torture are fine, but it’s not okay for Lush to stand up for basic human rights, or for a charity. Reprieve believes that this is a demonstration of censorship with no bearing on any justifiable goal.”

He added, “In the time of the Ancient Greeks, no major political undertaking was embarked upon without consulting the Oracle at Delphi. The management of the Oracle at Reading has failed to demonstrate why a fair trial is either distasteful or political. Yet numerous avowedly political campaigns have been -- and continue to be -- presented in the centre’s stores. Topshop, for example, has rightfully campaigned for Fair Trade, and Lush itself has campaigned against animal testing and against unnecessary packaging, without attracting criticism from the management. Fair trade is okay, fair trials are not?”

Andy is the author of "The Guantánamo Files: The Stories of the 774 Detainees in America’s Illegal Prison" (

http://www.andyworthington.co.uk/?page_id=17), and is the Communications Officer for Reprieve (