Student activists raised issues such as corporate corruption and climate change at a Shell-run event. Shell employees only commented "I do not have an opinion on this subject" when asked how they respond to these polemical matters.

A group of seven Nottingham student activists utilised the event's exercise of identifying “risks” Shell might face when drilling for oil of the coast of a West African island to raise awareness amongst potential Shell graduate employees and send a message to Shell that they are not welcome in Nottingham. The activists employed varying tactics with some preferring to employ a highly effective “Yes Men” style, some sporting anti-shell clothing, others distributing leaflets about the corporation and others still opting for outright, heated debates with (rather disheartened and dispirited) Shell employees. Despite the fact that students tackled Shell differently, an impressive sense of unity was achieved as four out of the five groups’ presentations ended with harsh criticism of the corporation. Such criticism included a condemnation of Shell’s previous brutal, corrupt, murderous and polluting history in West Africa, the corporation’s implication in peak oil, climate change and the necessity of the rejection of the global economic system which has led to climate change and absolute poverty in the first place. During the question and answer section at the end of the presentations the need for real solutions to the climate change challenges was raised - not “green wash”, not “Corporate Responsibility” and not bio fuels. Despite there being a bio-fuels “expert” from Shell present, whilst all of these issues were being raised by the students the corporation’s employees remained strangely quiet.

Along with the environmental discussions, the student activists highlighted the fact that corporations like Shell are content to fund violent dictatorships and private armies (e.g MoPol in the case of Nigeria) to repress local opposition to their exploitation of natural resources. The response from the majority of students attending the corporate event was one of interest, as they did not know of Shell’s sinister past, whilst Shell employees almost universally denied knowledge of the corporation’s links to the hanging of innocent environmental activists in the Niger Delta.

Before leaving, the activists made it clear that a better world is possible citing the environmentalist/anti-globalisation, non-hierarchical, grass-roots movements springing up all around the world that "will continue to grow until corporations like Shell do not exist”.

Numerous other harsh threats to the corporation’s multi-billion pound existence were met with silence from the corporate employees. Surprising as it may seem, Shell consistently rejected the opportunity to put a corporate spin on the charges made against them – even when directly asked to do so. 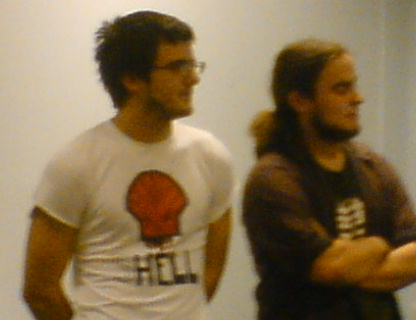 what a nice t-shirt!