Japanese Officials Caught Lying on Firearm Use against Sea Shepherd

Captain Paul Watson was shot in the chest during an engagement between the Sea Shepherd vessel Steve Irwin and the Japanese whaling ship, Nisshin Maru on March 7. The Japanese Foreign Ministry and Institute for Cetecean Research have denied guns were used at all during the engagement in contradiction to advice given to Australian embassy officials in Japan and the reports from Sea Shepherd. 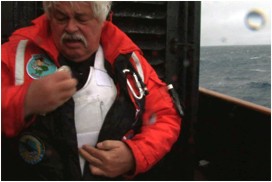 Paul Watson immediately after being shot by Japanese Coasr Guard

The incident occured around 3:45pm Australian Eastern Standard Time (0445 GMT) in the Australian Exclusive Economic Zone of Antarctica. According to a report by Peter Brown, 1st Officer on board the Steve Irwin "A single bullet was fired by what must have been an expert marksman at Paul’s chest, which embedded in his Kevlar vest and also damaged a metal badge worn behind the vest. Fortunately, this stopped the bullet penetrating his flesh."

The ships’ doctor, 49 year old Dr. David Page, a specialist anesthetist from Sydney, New South Wales, was videotaped prying the bullet from Captain Watson’s Kevlar vest. “You have been hit by a bullet,” he said. Dr Page was emphatic that without protection, the shot would have been lethal.

Dr. David Page, the ship’s medical officer, has examined and verified that there were three injuries sustained, all severe bruises. Ralph Lowe from Melbourne was bruised on the back by an exploding flash grenade, and Animal Planet cameraman Ashley Dunn from Launceston, Tasmania injured his hip while trying to avoid a flash grenade. Captain Watson has a large bruise and a cut on the upper left side of his chest.

"At the time the shot was fired, the Japanese whaling vessel Nisshin Maru was moving parallel to the Steve Irwin in stormy seas. The high level of movement indicates that the shot must have been fired by an expert.

"The Steve Irwin continues to track the Nisshin Maru west after it altered its northerly course."

"We have received verbal confirmation that the Australian Embassy has been advised by the Japanese that a crew member on board the Nisshin Maru fired “warning” shots. In addition to the lead bullet lodged in Captain Watson’s Kevlar vest, up to seven flash grenades were also hurled by armed Japanese Coast Guard Officers, injuring two other Steve Irwin crew members."

"Captain Watson is now in a comfortable condition, and no whales are being slaughtered in the name of bogus research by these illegal poachers. No warning was given that a bullet would be fired."

Japanese Fisheries, the ICR and the Japanese Foreign Ministry have denied any firearms were used and have denied that the Japanese Coast Guard fired the shot that hit Captain Watson. Mr Minoru Morimoto, the Director General of the Institute of Cetacean Research said "No-one shot at Paul Watson. His claim that we shot at him and he has the bullet that was stopped by his bullet-proof vest is more fiction for articles for the Australian media,". This was echoed by public relations consultant Glenn Inwood.

According to the Japanese Ministry for Foreign Affairs "The Japanese Government unequivocally denies the accusations of Sea Shepherd Captain Paul Watson who claims he was shot by a Japanese Coast Guard (JCG) on board the Nisshin Maru. At no time during all these, was there any possibility that a lethal form of firearm was used. The claims by Paul Watson are absolutely false and are further proof of the tactics they are using to disrupt Japan's legal research activities."

However Australian Foreign Minister Steven Smith has confirmed that "Japan has advised the Australian Embassy in Tokyo that a crew member on board the Japanese whaling vessel fired warning shots." Australian officials in Japan are seeking further information.

The true violence in the southern ocean has been the slaughter of hundreds of whales, which has now escalated to an attempt to murder an anti-whaling activist. The International community, particularly those IWC nations meeting in London informally at the moment, needs to ask of Japan to withdraw the whaling fleet immediately from the Southern Ocean Whaling Sanctuary, and to close down industrial whaling in a very poor masquerade as science.