At 1.30pm on Saturday 8th March, upwards of 80 people took part in a flash mob in the Bull Ring (TM) in Birmingham city centre, where people froze in 'suspended animation' for 5 minutes. 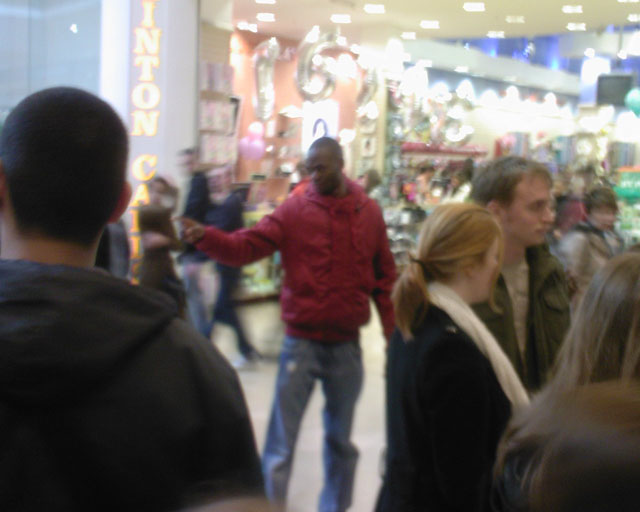 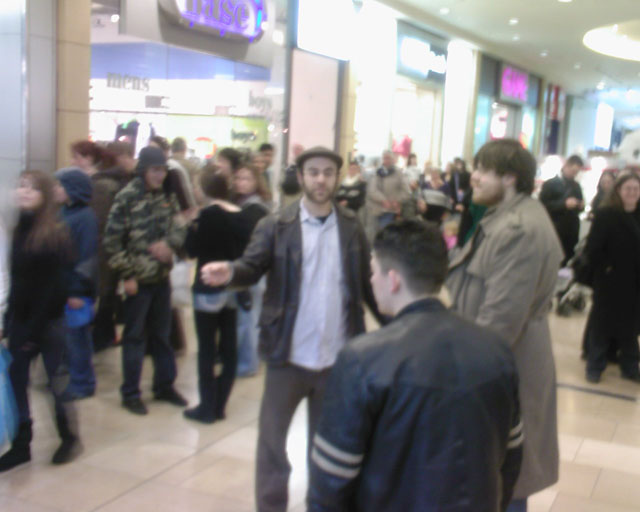 I arrived at the meeting place shortly after 1pm, around 60 people had gathered near to St Martin's church, I looked around to make sure I was in the right place and many knowing looks and smiles were exchanged. Shortly, the group were approached by three unfriendly and officious Bull Ring (TM) security guards who demanded to know who the 'organisers' were. There were a few shouts of "there are no organisers!" and "nope, none here", before they approached a member of the group who carried a megaphone. The three of them stood around him as closely as they could and did their best to look intimidating. One of security team looked as if he was in his element, an important look dawned his face as he muttered into his FBI-style curly ear-piece. The megaphone carrier was told that they would have to "shut us down" if the group did not move on, however no elaboration of the consequences of this threat were provided. It seems that they somehow caught wind of this stunt, probably notified by the police who are rumoured to keep a close eye on the social network website facebook, which was used to arrange the action.

After regrouping near the infamous shitting bull (several years back there were reports of cow shit appearing at random times underneath it's rear) the group prepared for the action and quickly dispersed in different directions. I stayed behind for a few minutes to watch security guards hopelessly look for potential 'suspects', but only succeeding in giving menacing looks to confused shoppers. By now it was 1.15pm and there was a good fifteen minutes before the beginning of the action so I carried out a quick reconnaissance mission to find a good location, finally settling on the lower floor at the centre of the pavillion. At precisely 1.30pm, a surreal vision materialised as people suddenly froze on the spot everywhere, some halfway through a footstep, some pointing, and the odd young couple embraced in a kiss. As the minutes passed, the amusement of onlookers was apparent; quite a crowd had gathered, and strangers were exchanging smirks and discussing what the meaning of this could be. Temporarily, the monotony of shopping had been broken, and a new use for the space had been found; amusement which didn't require spending. I looked down the pavillion and saw three security guards running in full flight down the pavillion, narrowly missing shoppers as they sped past. Suddenly the security were shouting and shoving people out the way, even people who had nothing to do with the stunt. "YO YO everyone MOVE! Nothing to see here! MOVE ON!" they bellowed. Of course, no one did, and onlookers looked more irate than threatened. Unfortunately, the act of people not even batting an eye-lid enraged them further and the three of them exploded in anger, wildly shouting at everyone in the vicinity, much to the shock of everyone present. "Put your phone away!" one shouted as he grabbed my arm, to which I shouted back at him to stop assaulting members of the public, and said I was taking photos of him and his accomplices for evidence. He looked nervous and stepped back. Shortly, the five minutes was up, and everyone carried on walking. As if nothing had happened. The security guards followed some of the group outside, quite brashly congratulating each other on their 'bravery'.

After reconvening at the infamous shitting bull, everyone in the group was in high spirits, the action had been a success, and it was agreed that a celebratory drink was in order. I saw a man in a suit talking to an older lady, who I recognised as being a member of the group. I approached them and listened in to their conversation. It became apparent that the suited man was the Bull Ring (TM) security manager and was complaining to the lady of the inherent dangers of "causing blockages" in the shopping centre (or perhaps the horrifying thought that corporate profit making was interrupted on his watch). After informing him of his exaggerations and putting it to him that the assaults carried out by his aggressive security staff were the only safety threat to patrons of the shopping centre, he declared that he "did not want to speak to me". I noticed that a rather rotund security guard had been summoned while my back was turned, and he exclaimed that I was on private property, that I had to leave immediately, and that the police had been called. I told him that trespass is not a criminal offence but a civil matter so the police could not intervene, and furthermore I was in fact leaving the premises as he had requested but there was no law saying how fast I had to walk. He proceeded to press his belly against me which made me feel a little ill, so I decided it was time to pay a visit to the pub.

On the way, I considered the success of the action. I had attended simply for a bit of a laugh, It was an apolitical stunt, someone told me how the event could speak for itself if everyone brought their own interpretation and meaning to it. I thought how inspiring it was that so many people, most who had not met previously had come together to make this small piece of history. I think most people came for fun, to feel part of something special, and to show the public that something different and interesting can happen. Then I thought how intolerant certain people were of the event and why. Those who were intolerant respresented the interests of big business, and in my experience they are intolerant of all events like this. Any 'deviant' behaviour which does not fit the narrow confines of serving profit-making is stamped down upon. Their message is clear, however small the interruption is to their profits, it will not be tolerated. There is a creeping ideology which poses a threat to our public spaces, they are "zoned" for commerical purposes, their sole purpose for spending money and any other activities are unwelcome. Before the Bull Ring (TM) the throroughfare was public land, now it has been sold off to commerical interests without our consent or knowledge. That land was ours and now we could potentially be excluded from it. Recently, radical groups like Food Not Bombs who provide free food to the public (particularly homeless people), have been targeted by council officials as they do not fit in to their narrowly defined social norms.

This ideology should be challenged because this is *our* land, and we should be able to use it as we see fit without being subjugated by what is effectively an elitist special interest group claiming to represent the interests of everyone. In Spain people share a beer and play cards on the cathderal steps as the sun sets, in France people play boules on the grass, and in a US city this Friday a mass of people will play a night time urban game of "capture the flag" on their streets amongst drunken revellers. Is it any wonder we live in a more isolated and anonymous society? Public space is the glue which connects people and builds communities yet it has been compromised, unless of course it is mediated by a profit making entity such as $tarbucks or McDonalds. There has been no real discussion about this, it is just a status quo which has been insidiously forced upon us. However, this status quo can be challenged, we can reclaim our public spaces for fun, or whatever other purpose we see fit. Such stunts and actions show people that there is a different way of doing things and they are invited too. If anything, that was certainly proven on this day.

Err, which as you can see from the video is slightly biaised ;)