Library Staff Speak Out Against Uniforms and Management Bullying

Over a year ago, a rumour was doing the rounds in Nottingham libraries about the introduction of uniforms for library staff. The union reps looked into it and it was brushed aside as 'not going to happen for ages'. A couple of months ago they were surpised to hear that the uniforms would suddenly be introduced by March. No consultation, no advanced notice. So why does the council feel there is a need for uniformed staff in our libraries? And why does it threaten its own staff members with dismissal if they were to speak openly about these changes?

One library assistant did decide to speak out. Barbara, who's identity we cannot reveal, has worked in Nottingham's libraries for many years. She told Notts Indymedia in an interview about her anger over the decision by the City Council to introduce uniforms. In addition, she talked about the depletion of library service resources and the bully tactics employed by City Council managers to keep its staff in line. 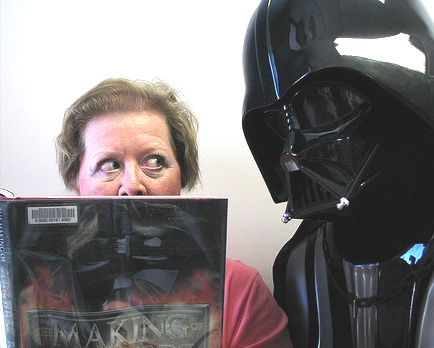 What atmosphere are we creating in our libraries? Pic by flickr.com/circulating

Has anyone ever heard of a library in this country (or any other) where its staff have to wear uniforms? It seems an absurd idea to come up with, but nothing should surprise us anymore with a council so obsessed with pushing its corporate branding. Let's have a look at whats going on here. In 2005, inspectors from the Audit Commission payed the city a visit to assess the council's improvements on accessibility of services. The Audit Commission is a public body and was established under the Local Government Finance Act of 1982, to appoint auditors to all local authorities in England and Wales and keep an eye on their spending of public money. In the report by the auditors, named 'Access to services' they point out the 'non wearing of a standard uniform' by reception staff. The Executive Board of the City Council then decided in September 2005 upon a strategy to introduce uniforms for 'reception staff', for example in museums, council offices, leisure centres and at the tourist information point. This strategy is known as the 'Corporate Uniform Project'.

So what did the report by the Audit Commission actually say? The report pointed out clear shortcomings in the accessibility of council services. Extract from the report which makes mention of uniforms:

" The council is currently providing a variable level of access across the city. This is illustrated across the city in a number of ways: poor physical access at the social services reception at Clifton; variable standards between the housing offices at Clifton and Bilborough; variable opening hours at different receptions and council buildings; variable waiting times at different council locations. Customers at Lawrence House and the treasury reception have traditionally experienced long waiting times with waiting periods of 40 minutes not uncommon at busy times. Housing aid, Lawrence House and trading standards areas often have customers waiting for up to 10 minutes; telephone callers to housing benefits are dealt with through a far more efficient call centre than other parts of the council; and reception staff across the council do not wear a standard uniform or give a standard greeting which again reflects a level of inconsistency. " The entire report can be read online here.

So there is a mention of the 'non wearing of a standard uniform by reception staff'. This is something we picked up on after councillor Trimble mentioned it in a council meeting on 4 February after another councillor questioned him about the library uniform issue. What councillor Trimble fails to mention is that the Audit Commission didn't mention anything else about uniforms in the rest of its report and nothing about it can be found in their recommendations which were attached.

Back to the Corporate Uniform Project. Under this project over 300 people get tucked in uniforms in 3 phases over a couple of years and just the uniforms for library staff will cost around £25,000. The first phase mainly included reception staff at City Council offices such as the Guildhall, Severns House and the front line staff at the Housing Benefit department. This part of the plan was concluded in May 2007. Then came the second phase which included museum staff and those in working Housing Aid offices. The third and final phase was hoped to be introduced in March this year. The library staff is by far the biggest group of council employees to be dressed up as part of the Corporate Uniform Project. In light of the minor mention of the lack of uniforms in the report by the Audit Commission back in 2005, which the council argues set them onto this project, it is questionable if this is the real reason behind the introduced changes. Could it be that someone at the council picked up on the one comment about uniforms in the report and thought it a good oppertunity to push the council's corporate branding even further?

When we interviewed Barbara, who has been a library assistant for many years, she explaines that the council have already made various changes in the libraries to tighten their grip on making sure council propanganda is utalized is every possible way; " Things seem to be getting more centralized, I now work in a community library so we're quite often left to our own devices which is part of what I like about the job. You see something needs doing and you get on with it. But there seem to be more and more directives coming from central [management] at the moment. [...] for example we used to make our own posters, 'sorry this computer is broken' or 'we're closing over Easter' or a little notice like that. But now you can't have them without saying that you're proud and ambitious and cleaner and safer. You've got to use all the logos. [...] It's all becoming far more corporate. "

Through other sources we've learned that libraries used to get leaflets and brochures delivered, and library staff could decide themselves which to display and when to remove them. Now management has to approve all leaflets, and sends out lists of when to take them down again. All libraries have to have standard messages on their answerphones, and give a standard greeting when answering the phone. We've learned that recently all libraries were emailed with a template of what to say when someone wants to order a book! First they can't choose what to wear, now they can't choose what to say. Seems like the thought police are only just a few meters behind!

So the latest in all this is the introduction of the uniforms. Barbara explains; " I was told about it through rumours which is how we get all our information. Somebody will say; 'have you heard that, have you heard that'? But that was over a year and a half ago. And we kicked up a stink and were told to 'write what you feel about it', so we did, but it was ignored. Unison have now [issued] a grievance which means the uniforms have been put back by 2 months, while there’s supposed to be a consultation. [...] It's not just library staff, I don't know if you've noticed but all the reception stuff at the Guildhall and where ever, they've all been uniformed. [...] And other people aren't happy but they've at least been consulted. We weren't consulted, we were just told this. And apparently they really gotta do it or they'll just loose face. "

The senior library management makes it very clear that no one is to speak about these changes in public and/or to the press. In a previous case, Sarah Roy, who worked for the welfare advice department, spoke out about the council's controversial decision to merge the city's welfare rights department into the management of the housing benefit service back in September 2006. In that situation employees were only told about the decision 2 or 3 days before it was implemented and were told in an email to 'keep quiet' about it. Sarah Roy was subsequently fired over the issue. Read this feature article for more info.

In this instance the situation seems similar. Barbara says she feels bullied by senior management as they are making it clear that it will become a 'disciplinary matter' if anyone speaks out about the issues at stake. She says; " We do feel bullied. We do feel bullied because we have been told we are not allowed to talk to the public about the uniform issue. Officially the public isn't suppose to know about the uniforms coming in. [...] But yes, we are told that it will be a disciplinary matter and we could be sacked if we discuss this or had any kind of protest about it. Oh yes, there have been emails [going] around saying that if any media come in and want to discuss anything to do with the council library service we must not talk to them, we've got to direct them to management. " This is an interesting stand that the management seem to take as Barbara is adamant she never signed any confidentiality agreement.

Besides the bullying and the other issues concerning the workers in our libraries we should all be concerned when politicians are looking to take over the neutral space which the libraries have been for many years for their gain in this political propaganda circus. How far will it have to get? " I don't know if this is true but I've heard a story of one asylum seeker leaving the library saying 'aren't you gonna search me'? because he was used to that kind of treatment where he came from. That is the kind of atmosphere that uniformed staff will provoke. One of the lovely things about the job is the relationship we build up with the users, some of whom we've known for years and years. Some of them were children when we started and now have children of their own. And there are old people who've been coming in a lot. A lot of the old people come in for a chat rather than for books, that's one of the lovely things about the job. It's the personal contact and we feel that they're friends and we're their friends and it won't be like that if we're wearing unforms. We won't be ourselves, we will just be the face of the council. "

Are you up for supporting your library staff? Some ideas of what you can do: