War on the streets in Armenia

February and March in Armenia saw a disputed presidential election (19/2/2008) followed by eleven days of demonstrations in the capital Yerevan, broken up by tanks, police attacks and the imposition of a State of Emergency (1/3/2008). Eight people, including a child, were killed by police and around 100 were injured including 33 police. An apparently unrelated border fire-fight on 4/3/08 in the territory of Nagorno-Karabakh, disputed with neighbouring state of Azerbaijan with whom Armenia is still technically at war, broke a ceasefire agreed in 1994, killing 12 Armenian conscripts. 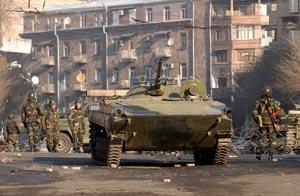 But everything will be fine now because the great peace-maker John ‘Are you looking at me?’ Prescott is on his way to sort everything out. Prezza is maybe not the best choice of diplomat, however. Aside from being an embarrassment to the Labour Party and having been shipped off to the Council of Europe's Parliamentary Assembly in October, he presided over the international commission that declared that the Armenian election had been ‘generally democratic’ but that there had been ‘some problems with the counting of votes’. The election got the thumbs-up then? From Prezza, but not from the people of Yerevan.

The disorder that followed the election of Serzh Sarkisian as successor to his crony Robert Kocharian, who is barred from standing for election for a third term, has been understood by the international media as being anger that Sarkisian’s rival Levon Ter-Petrosian was not the victor. Given the absence of partisan leadership in the subsequent demonstrations, could it not simply be that the people of Armenia are sick of lying politicians and their nationalist agendas, and the repression and diversionary wars that follow expressions of dissent. What started as a peaceful protest camp was broken up violently, and people responded with petrol bombs. This is no velvet revolution but a pitched battle between a state and those it rules.

Conveniently for its government, Armenia is a country surrounded by enemy states, not least Turkey and Azerbaijan, and a breeding ground for nationalist rhetoric at home where there are 2 million people and amongst its huge diaspora, 8 million descendents of those displaced in the Armenian genocide of 1915 perpetrated by Turkey. A large part of the present trouble is that the vote was recently extended to this diaspora, mostly living in the US. This often-nationalist body is ignorant of the political and clan-based corruption and the repression to which political opponents are subjected. The situation for Anarchists in Armenia is so bad that the entire membership of Armenian Autonomous Action, who are Anarchist-Communist activists, are now in exile in Europe and the USSR.

What has happened in the Karabakh, according to a member of Autonomous Action, is “the usual thing that happens every time there is some trouble in Armenia. The state provokes trouble with Azerbaijan to remind the people of the years 1991 and 1995. Then, because of the war and the blockade of Armenia by its enemies, there was no food or fuel. The point is that even if people don’t care about the Karabakh, they care about freezing and starving. It’s like a threat by the state; it happened before and it can be repeated, if they mess with the clan-based state and its business”.

Anarchist Federation, Eastern Europe secretariat*, 8th March 2008
*please note that Armenia is located in the Transcaucasus between Europe and Asia.