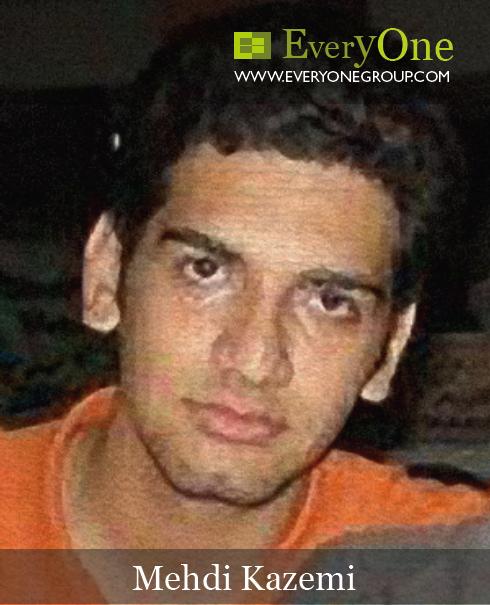 After the historical approval of the European Resolution on the case of Seyed Mehdi Kazemi (see below) the British Home Secretary, Jacqui Smith, decided a few hours ago to suspend the procedure that would entail deportation to Iran for Mehdi Kazemi, the young Iranian gay, member of EveryOne Group (www.everyonegroup.com).

What happened today is the result of the international intervention which saw EveryOne Group with the Nonviolent Radical Party and the associations Nessuno Tocchi Caino and Certi Diritti on the front line.

“When we took on the task of trying to save Mehdi”, say the leaders of EveryOne Group, Roberto Malini, Matteo Pegoraro and Dario Picciau, enthusiastically, “the young Iranian boy faced deportation and death on the scaffold in Iran. Then we and our allies found ourselves flanked by a network of solidarity which prevented yet another crime against human rights. It is the first step towards a society that is no longer indifferent, a society that is capable of respecting the rights of refugees who are the weakest link in humanity.

We have to express our deepest satisfaction at this important victory on the field of human rights, which has resulted in the saving of a human life and written an important page in European history: from now on the highest authorities will guarantee that in all the Member States Directive 2004/83/CE is applied, which calls for the recognition of refugee status also for people persecuted in their country of origin because of their sexual orientation.

“It is a triumph for human civilization”, conclude the leaders of EveryOne, “a prelude for our next campaigns, the aims of which are to safeguard refugees and other persecuted minorities.

While we celebrate the saving of a life, however, we must continue to fight so that nations travel along the road of human rights and abandon persecutions and injustices which are the legacy of ages we have to leave behind us.”

MEHDI, IRANIAN GAY: AFTER THE CAMPAIGN BEGUN BY EVERYONE GROUP AND RADICALS, EXTRAORDINARY INTERVENTION BY THE EUROPEAN PARLIAMENT

News has just come in from Bruxelles that the European Parliament has approved with 60 votes (46 in favour, 2 against and 12 abstentions) an urgent resolution on the case of Seyed Mehdi Kazemi – the 19-year-old Iranian gay – member of EveryOne Group – who is about to be extradited from Holland to the United Kingdom. He risked immediate deportation from London to Teheran, where the death sentence awaits him because of his homosexuality.

Signed by 142 Euro MPs and 62 Lords of the British House of Lords, the European Parliament resolution on Mehdi Kazemi’s case was approved after EveryOne Group (www.everyonegroup.com), (together with the Nonviolent Radical Party, Transnational and Transparty, and the associations Certi Diritti and Nessuno Tocchi Caino), had requested urgent action from the European Union in an attempt to save the young man’s life. In the text, (which in the next few hours will be sent to the European Commission, the European Council, the Member States, the UN High Commission for Refugees and to Mehdi Kazemi himself), they ask Holland and the United Kingdom to “find a common solution to ensure that Mehdi Kazemi is granted asylum or protection on EU soil and not sent back to Iran, where he would be executed, thus ensuring that Article 3 of the ECHR is fully respected by all European authorities and notably, in this case, by the UK;

“Before our intervention, Mehdi had attempted in every way to avoid deportation to the scaffold, but it was only the incredible success of the campaign we set in motion, (together with the collaboration of the Radicals and Euro MPs Marco Cappato and Marco Pannella, the first signatories of the resolution), that has prevented, at least for the present, Mehdi being murdered,” commented Roberto Malini, Matteo Pegoraro and Dario Picciau, the leaders of EveryOne Group, which took on the case from the beginning and raised the alarm. “This time,” (explain the activists of EveryOne, who were also involved in the campaign to save Pegah Emambakhsh, the Lesbian Iranian refugee – who still risks deportation from London, seeing the Home Office has still not reached a decision on her appeal), “we did not ask people throughout the world to send flowers to Jacqui Smith or to Gordon Brown, because the highest British authorities have shown to have no respect for human life. Sending an innocent 19-year-old boy to die with a rope around his neck, is for them, just a bureaucratic procedure.”

The EveryOne Group campaign, which was set in motion after Mehdi’s uncle and some of his acquaintances approached the activists for help, was aimed at involving the international press first of all, and in the following stages the most important European institutions and the UN High Commission for Refugees. “Right from the beginning the campaign has achieved unexpected results,” say Malini, Pegoraro and Picciau, who have unsettled those responsible for the deportations. In the space of a few days the world’s main television channels have answered the appeal – the BBC, ABC, SKY News, CCN, and the London-based RAI, as well as the world’s major newspapers, Corriere della Sera, El Paìs, the Independent, Times and Guardian. Thanks to this extraordinary interest from the media, it was not difficult to bring to the attention of the international institutions, (starting with the European Parliament), that a persecution against homosexual refugees and other refugees is underway in the United Kingdom. It will now be difficult for the deportations of Mehdi Kazemi and Pegah Emambakhsh, (who is also mentioned in the European resolution), to take place, even though the United Kingdom’s attitude towards refugees should keep us on the alert. It is a situation that requires immediate intervention from the UN High Commissioner for Refugees”.

This is the full text of the European Parliament’s Resolution on Mehdi Kazemi’s case:

– having regard to the European Convention on Human Rights (ECHR), and in particular to Article 3 thereof, which prohibits the removal, expulsion or extradition of persons to countries where there is a serious risk that they would be subjected to the death penalty, torture or other inhuman or degrading treatment or punishment,

– having regard to the Charter of Fundamental Rights, and in particular to Articles 18 and 19 thereof on the right to asylum and on protection in the event of removal, expulsion or extradition respectively,

– having regard to the Geneva Convention of 28 July 1951 and the Protocol of 31 January 1967 relating to the Status of Refugees,

– having regard to Council Directive 2004/83/EC on minimum standards for the qualification and status of third country nationals or stateless persons as refugees or as persons who otherwise need international protection and the content of the protection granted (Qualifications Directive) and to Council Regulation (EC) No 343/2003 on the criteria and mechanisms to determine the Member State responsible for assessing asylum applications (Dublin Regulation), as well as to other EU asylum instruments,

– having regard to the letter of 10 September 2007 from its President to the UK Prime Minister on the case of Pegah Emambakhsh, an Iranian lesbian who risked being sent back to Iran after her request for asylum was turned down,

A. whereas Mehdi Kazemi, a 19-year-old gay Iranian citizen, requested asylum in the United Kingdom and had his application turned down; whereas, fearing deportation, he fled to the Netherlands, where he applied for asylum; whereas Dutch authorities, after examining his request, have decided to send him back to the UK,

B. whereas UK authorities are now left with the final decision on his asylum application and possible deportation to Iran,

C. whereas Iranian authorities routinely detain, torture and execute persons, notably homosexuals; whereas Mehdi's partner has already been executed, while his father has threatened him with death,

D. whereas in the similar case of Pegah Emambakhsh the UK authorities decided, after international pressure, not to deport her back to Iran, but whereas it is still not clear what her fate will be,

E. whereas the UK Prime Minister’s spokesperson, while not commenting on the case of Mehdi Kazemi, gave general assurances as to the conformity of UK asylum procedures with international commitments and to the possibility of appealing against asylum decisions to an independent judge, as well as to the fact that the authorities would not remove anyone who would be at risk on his or her return,

F. whereas more attention should be devoted to the proper application of EU asylum law in Member States as regards sexual orientation,

1. Expresses its serious concern regarding the fate of Mehdi Kazemi;

2. Asks for the proper and full application of the Qualifications Directive, which recognises persecution for sexual orientation as a ground for granting asylum and requires Member States to consider the individual case and the situation in the country of origin, including laws and regulations and the manner in which they are applied;

3. Believes that the EU and its Member States cannot apply European and national laws and procedures in a way which results in the expulsion of persons to a third country where they would risk persecution, torture and death, as this would amount to a violation of European and international human rights obligations;

4. Appeals to the Member states involved to find a common solution to ensure that Mehdi Kazemi is granted asylum or protection on EU soil and not sent back to Iran, where he would be executed, thus ensuring that Article 3 of the ECHR is fully respected by all European authorities and notably, in this case, by the UK; asks the Commission and the Council to fully cooperate with the Member States on this case;

5. Asks EU institutions and Member States to take action to prevent similar situations, in the future, through cooperation and EU guidelines to find solutions in similar cases; asks the Commission to monitor and evaluate the application of EU asylum law in Member States, and in particular as regards sexual orientation, and to report to the European Parliament; underlines the fact that the Commission has announced, for 2008, amendments to the Dublin Regulation and the Qualifications Directive which will address the issues raised in this resolution;

6. Instructs its President to forward this resolution to the Commission, the Council, the Member States, the United Nations High Commission for Refugees and Mehdi Kazemi.