Thursday morning, 08.00. Activists make an attempt to block all 7 sets of entrance doors and 2 gates to the World Biofuels Market held in Brussels this week. All but one set of doors succeeded. The action ended after 3 hrs with three people arrested, who were released after a few hours. 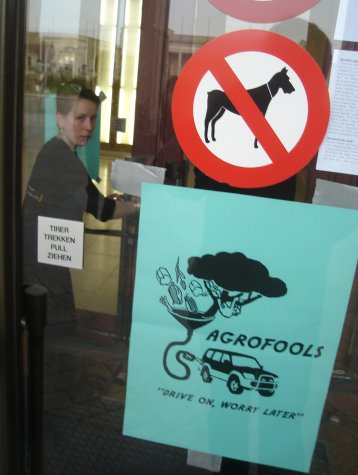 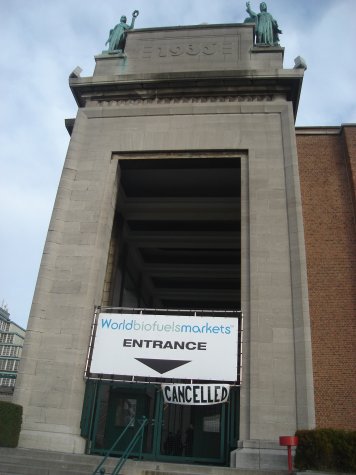 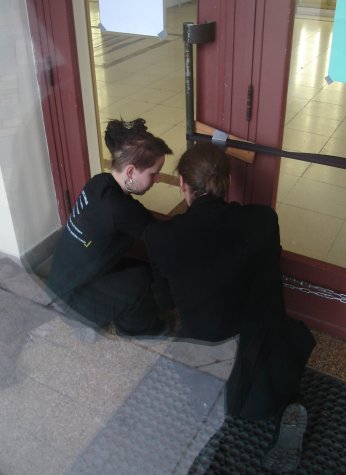 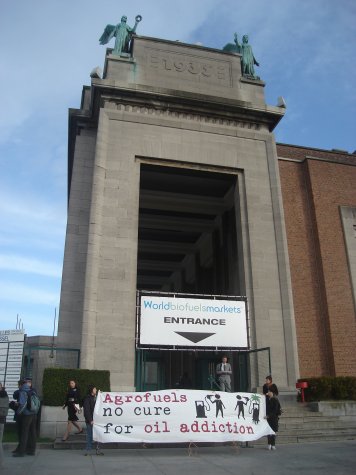 No cure for oil addiction 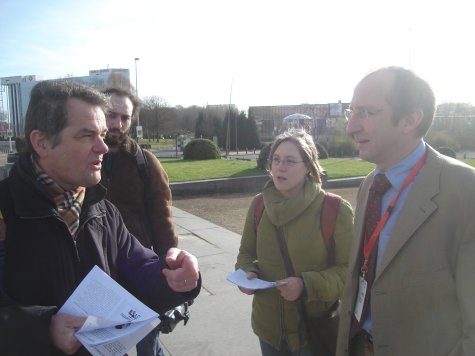 debate between activists and conference participant 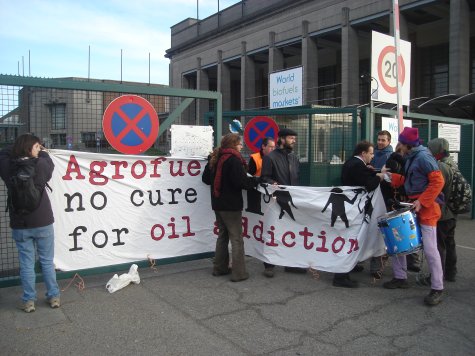 pushing around at gate

This morning, activist group 'Agrofools' closed down the World
Biofuels Market by locking closed with padlocks and chains four sets
of double doors and sandwiching themselves in between just before the
official opening soon after 08:00. A battle ensued between protesters
and security to lock the fifth set of doors.

Outside the conference centre the gates were also locked by a chain
and blocked by activist group of Rhythms of Resistance who then made
their presence felt with upbeat Samba for nearly two hours before
being given an ultimatum by police. The Samba was played to a
backdrop of three banners with slogans like 'Agrofuels are a Scam' and 'No Solution to Oil
Addiction'.

Meanwhile security forces inside the conference centre managed to
re-open one door as guards and staff overwhelmed protesters in a comic
'tug-o-war'. Delegates were then allowed to enter while the other
doors remained blocked for a further hour. Between each set of double
doors, a couple of activists, dressed up as conference delegates, had
locked themselves in.

When the entrance was not effectively blocked anymore, both groups
were still in direct sight of participants, outside at the entrance or
through the glass of the locked doors.

Activists targeted the World Biofuel Market as a "blatent attempt to
greenwash the oil industry". The long list of corporate delegates, and
the texts issued by the World Biofuel Market itself, clearly show that
they enter the emerging market of agrofuels not because they' re
worried about climate change or environmental damage: agrofuels are
just another corporate marketing strategy to squeeze the last bits of
money out of our oil dependancy and to win control . The run for
agrofuels is already causing severe social and environmental damage,
especially in the South. The so-called 2d generation agrofuels are
often put forward as an alternative, a claims that lacks serious
scientific background.

The activists were soon either arrested or sent away by Police after a
thorough ID check. The 3 arrested people were released at 12am.


ACTIVISTS PROTEST AT WORLD BIOFUELS MARKET
Brussels, 13 March 2008
EMBARGOED UNTIL March 13, 8:30
Today at 08.30 am, the action group 'Agrofools' staged a protest the
entrance to the World Biofuels Market. Visitors to the World Biofuels
Market were met by activists, a group of international drummers,
banners, and flyers entitled "Agrofuels ? No Solution for Oil
Addiction".
The human blockade is a protest against the blatant promotion of
agrofuels by the World Biofuels Market and the corporations taking
part in it. "Massive expansion, reaching into many millions of
hectares, of monoculture plantations will cause further damage to
biodiversity, human rights and livelihoods", says activist Remy de
Boer. "Agrofuels will exacerbate climate change and will certainly not
help to combat it. It is immoral to keep promoting the use of
agrofuels like the World Biofuels Market does", he added.
The World Biofuels Market describes itself on its website as a great
place for business to 'network' with decision makers and "structured
to maximise business opportunities". Meanwhile, agrofuels are being
legitimised by claims of environmental benefits. That, however, is a
pure greenwash exercise. "The corporations push for agrofuel
production, pretending they care about the climate. While in reality
agrofuels will help them to ensure that our oil addiction continues,
that the car industry can keep selling more and heavier cars, and that
the unequal access to resources in the world remains unchanged", says
De Boer.
There have already been many declarations and moratorium calls from
movements and organisations from North and South denouncing new
targets for agrofuel use, such as the 10% target by 2020 proposed by
the EU. One such call by African organisations states that ".. the
reality is that the gold rush is firmly controlled by giant
transnational companies which are taking over Africa's land at an
incredible pace, and are bringing about disastrous socio-economic and
environmental impacts on our communities, food security, forests and
water resources".
'Second generation' agrofuels, like cellulose ethanol, are often said
to deal with problems such as competition for land for food production
and targets are set, based on expectations that these will become
available soon. But the large amounts of cellulose needed to produce
them can lead to the expansion of large scale monoculture (GM) tree
plantations, with all problems involved. These plantations have
already invoked strong resistance from local communities. On March 4th
this year, nearly 900 women of La Via Campesina occupied Stora Enso's
Taruma estate in Rosario do Sul municipality, near the border with
Uruguay. They entered the land -of nearly 2,100 hectares- and cut
eucalyptus trees and planted native trees instead. This action was
responded to by police forces with repression and violence.
Overall, the North must stop exporting its over-consumption problems
to the South and begin to solve its own problems. We need a strong
reduction of consumption of energy use especially in industrialised
countries. We say no more roads, no more promotion of individual
motorised transport; but a cheap, sustainable collective transport
system. The production and use of food, feed and energy should take
place as locally or regionally as possible. Industrial agriculture
must be replaced by more small scale, diverse community supported
agriculture.

For more information:
Press contact: 0471/ 37.35.01 and 0495/ 31.76.46 [english and dutch]
High resolution pictures can be sent to you on request. Send an email
to
----------------------------------END PRESS
RELEASE---------------------------------------------------------------------
Facts for the editor:
* Deforestation and other types of land use change is estimated by the
Stern Review (2006) to be responsible for 18% of all greenhouse gas
emissions globally. Peat drainage accounts for even more carbon
emissions than deforestation worldwide. Monoculture expansion is a
leading cause for both land use change and peat destruction worldwide.
Large amounts of fossil fuels are needed to produce the fertilizers,
running agricultural machinery, transporting feedstocks and fuels, and
refining agrofuels. NOx emissions from fertilizer use are also a major
greenhouse gas.
* The European Union is already the largest importer of palm oil
products in the world and the Netherlands is the main importer within
the EU. Crude Palm Oil imports grew from 1.7 million tons (Mt) in 1995
to 5 Mt in 2007. The EU imports of soy meal from Argentina and Brazil
combined added up to 24 Mt in 2007, in addition to 14 Mt of soy from
which oil is produced in the EU. Use of soy oil as agrofuel will be
another added value to the product, which is likely to increase its
production.
* A collection of calls for a moratorium on targets and incentives for
agrofuel use and trade can be found on www.biofuelwatch.org.uk