Fitwatchers arrested for "intimidating the police" at STWC march

Four people were arrested near Trafalgar Square around 1:15pm on Saturday during the Stop the war Coalition rally, accused of intimidating a Forward Intelligence Team. Officer XB92 'Wayne' Rooney requested back-up from three van loads of the Met's 'Griffon' squad - supposed to provide additional security against "the threat of terrorism" within the "Government Security Zone". Leaflets about the Campaign for Free Asssembly (

http://www.indymedia.org.uk/en/2008/03/393790.html) were seized as evidence, along with cameras, mobile phones and notebooks. The arrests were made under s241 of the Trade Union and Labour Relations (Consolidation) Act 1992, see below. All four were released on bail without charge after being held at Bishopsgate police station for 9 hours. 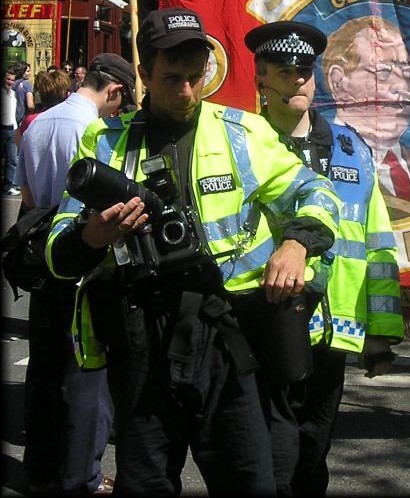 241.
Intimidation or annoyance by violence or otherwise.
— (1) A person commits an offence who, with a view to compelling another person to abstain from doing or to do any act which that person has a legal right to do or abstain from doing, wrongfully and without legal authority—
(a) uses violence to or intimidates that person or his wife or children, or injures his property,
(b) persistently follows that person about from place to place,
(c) hides any tools, clothes or other property owned or used by that person, or deprives him of or hinders him in the use thereof,
(d) watches or besets the house or other place where that person resides, works, carries on business or happens to be, or the approach to any such house or place, or
(e) follows that person with two or more other persons in a disorderly manner in or through any street or road.
(2) A person guilty of an offence under this section is liable on summary conviction to imprisonment for a term not exceeding six months or a fine not exceeding level 5 on the standard scale, or both.
(3) A constable may arrest without warrant anyone he reasonably suspects is committing an offence under this section.

On bail without charge

I totally agree with the "sexist" comment. The same was said (quite loudly) at the station yesterday. Very badly written ( 'injures' his property??) and very sexist.

No way did the FIT-watchers expect to get nicked yesterday for that. Cops claim they warned them that what they were doing was an arrestable offence...then arrested them straight after.

At the station, when looking at the legislation, one custody sergeant talked to another, quietly but clearly enough for one of those arrested to over-hear him.

"This isn't going to work... Even if they get found guilty of this, it's just going to go to judicial review and we won't be able to use it anymore. They'll only be able to arrest once under this act. We might as well just drop it now."

"Yeah, but it's not down to us is it..?" (Coming from the guys who have the power to decide whether or not to athorise the arrest and detention..)

An obscure arrest, easier to prove than 'obstruction of an officer' and has a bigger punishment. One which only one or two of the cops understood, the rest were as confused as those nicked under it.