Brief comments and images from Saturday's Stop the War/CND/BMI march in London. Images are copyright Peter Marshall; all rights reserved. 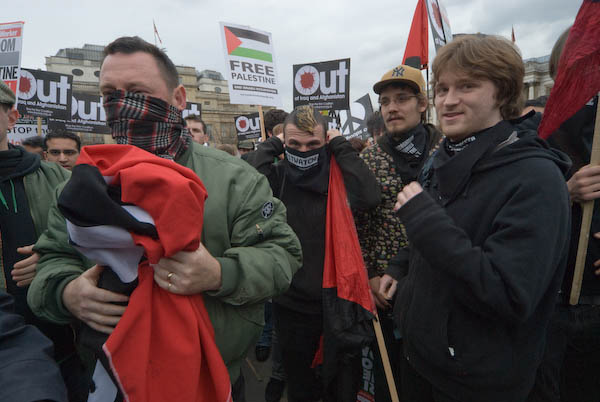 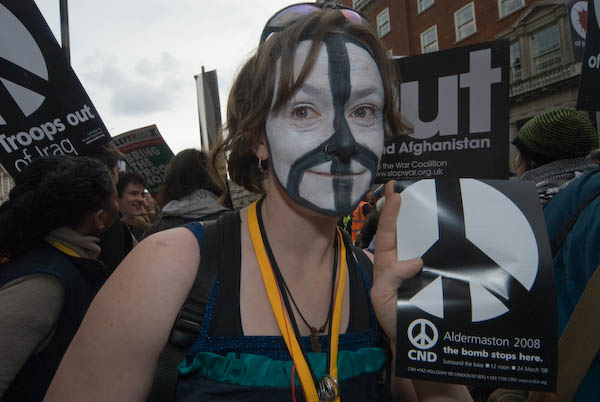 See you Monday week at Aldermaston 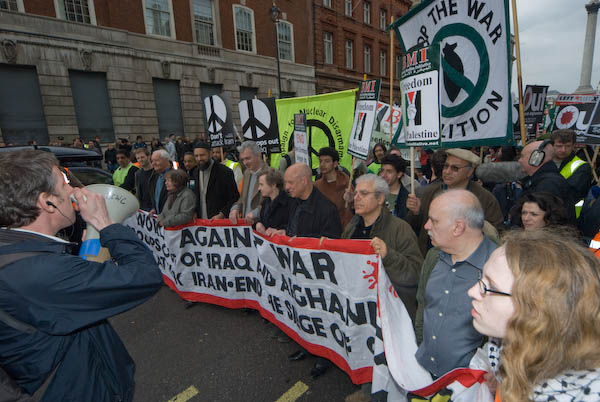 The march sets off down Whitehall 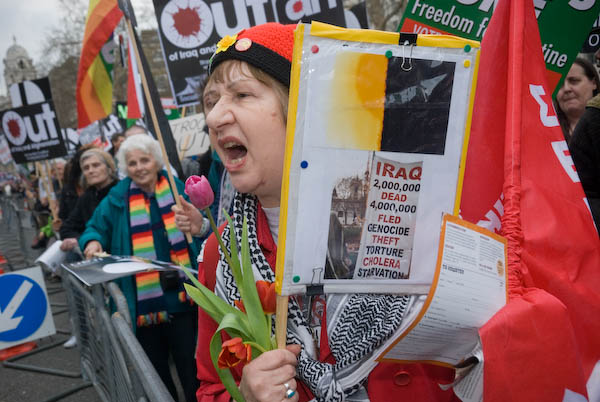 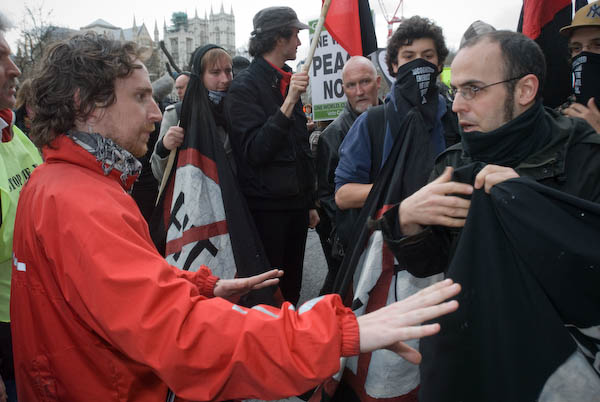 Steward remonstrates with FITwatch at Westminster 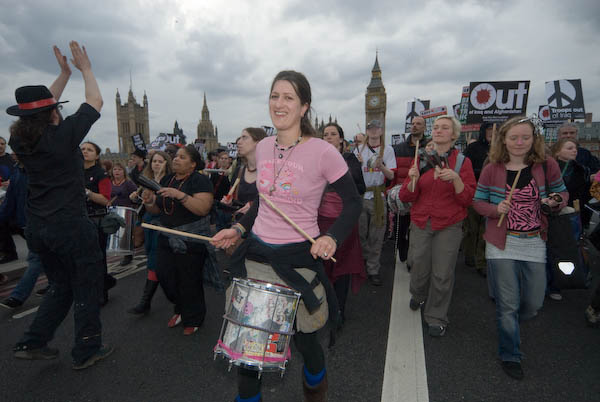 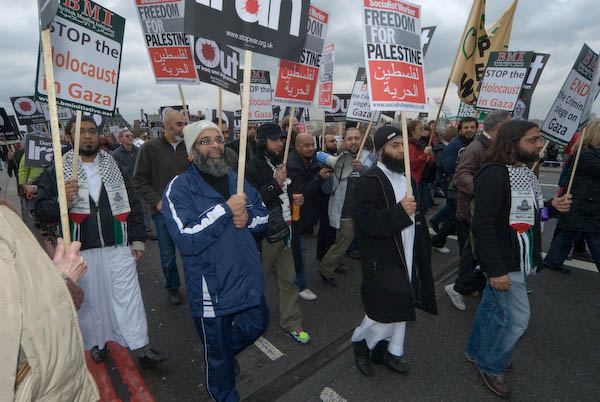 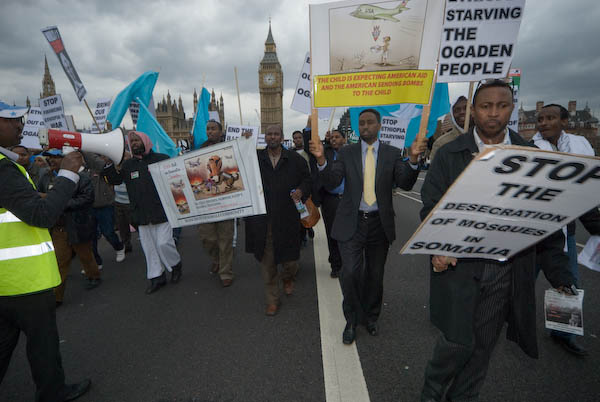 If there is anything to be learnt from the march 5 years ago, it is that marching isn't enough, but even so it was good to see another march that demonstrated something of the depth of support for the movement. The march virtually surrounded the Houses of Parliament; when the tail was at Westminster station, the head of the march which had passed there 40 minutes earlier was just arriving at Parliament Square a few yards away having completed a roughly 2.25km circuit over Westminster and Lambeth bridges. The estimate by the organisers of 50,000 was probably in the right order of magnitude.

As well as calling for a stop to the wars in Iraq and Afghanistan, the march also called for freedom for Palestine and for no war against Iran. Many groups also took the opportunity to bring other causes to attention, such as the genocide and occupation in Somalia. There were also groups from Greece, the Congo and elsewhere.

Although there wasn't the massive police presence seen at some other events there was a full FIT turnout, and they mostly seemed to spend their time standing close to the small groups of FITWatch and Class War supporters. I wasn't around when they arrested 4 of them, apparently for "intimidating the police." It's hard not suspect this as a retaliation for the loss of face two weeks ago in the same square, when as I reported (

http://re-photo.co.uk/?p=227), "the FIT photographer ran scared, chased by a protester with a shopping trolley offering free cakes, taking refuge by running up the stairs of the National Gallery."

FITwatch also had a little argument with the event stewards on Westminster Bridge where they were pushed aside by the front of the march. Otherwise I wasn't aware of any other incidents. A much fuller report on the event - at least with many more pictures - will appear on My London Diary, at

...would really think its a little inappropriate to put these people's faces up un-blurred. You only have to go down the page today to see that people were arrested for interfering with the FIT - I know it probably wasn't malicious to publish the pictures, but it might be an idea to take them down asap, and return them blurred, if you so wish.

As for what happened with the stewards, in short...

The head of the demonstration was reserved for all the high-profile people, usual suspects etc. behind the main StWC banner. A guy who I recognised from high up in the SWP was chant leading and generally 'organising', with an ear piece in, in front of the main banner. In front of these, were a linked half circle of about 30 StWC stewards - clutching eachother's arms and trying to ensure nobody got into their front area/pushed the march at a speed faster or in a direction they didn't want.

In white hall, FITwatch, people from the loose autonomous bloc and groups of other protesters, bored of the snail pace and usual routine, walked in front of the linked stewards informally walking in the road in front. In front, was a line of police, who kept slowing the march down at regular intervals. When this happened near Parliament Sq., the stewards went crazy, blaming FITwatch etc. for blocking the march and stopping it...when in fact it was a large line of police refusing to let the march move. After arguing, people stepped out of the way and onto the pavement to prove they weren't the reason for the stoppage...and low and behold...the march was still stood still.

The second incident was near Embankment station just before going over the bridge. Again, people had gone ahead of the linked-armed stewards, and were walking in front nearer to the police lines. When the police line stopped and the stewards caught up, they demanded everyone in front of them out of the way. One guy was particularly aggressive, saying that FITwatch etc. were ruining the march for everybody, and that people had put years of effort into these marches etc.etc. The steward didn't seem to understand that the march is for everybody, not just the self-appointed leaders...and people spelt out to him that not everyone was prepared to trust the 'leadership' of a movement that repeats the same old stuff, without any tangible results...A team of FIT distracted people on the bridge, as many stayed to prevent the FIT team from taking surveillance of demonstrators with the large banner.